Last month, squirrels shut down the internet in our sleepy Western New York neighborhood. They’d chewed through the data delivering cables. (It’s a thing) This caused my 88-year-old father to panic.

“Carrie, call our internet provider to tell them we have an internet emergency.” (I did, and the company connected fresh cables two days later)

So, I know from experience that Boomers use the internet. But surprisingly, what I learned from Sounds Profitable’s recent study about podcasters was Boomers don’t use the internet to make podcasts. GASP!

In case you missed it…

Only 2% Of Podcasters Surveyed Are 55 or Older

Yet roughly one-third of Americans are Boomers. Comparatively, the percentages of podcasters in other age groups mirror the US population. In that context, this 2% figure is even more startling.

The study itself postulates that Boomers are one group caught in a sort of negative feedback loop: Because listeners fifty-five and older don’t hear creators in their age range, they aren’t inspired to become podcast creators themselves. Yet, because Boomer voices are absent from podcasting, Boomers are less likely to consume podcast content regularly.

The Infinite Dial 2022 reports that Boomers do listen to podcasts, though their adoption has grown slowly compared to younger folks. The report tells us that only 22% of Boomers listen to podcasts monthly. (down four points from 2021) But, the chances of hearing someone that may look and sound like them are slim.

Exposure to podcasts via more traditional media introduces potential listeners to podcasting. When the podcasters portrayed in that media look like Boomers, who are rarely creators, that’s practically revolutionary.

My 57-year-old sister loves Hulu’s Only Murders in the Building, which is a series about three true crime podcasters, two of which who happen to be Boomers.

“I finally understand what you do!” she announced last November. Since discovering the show, she’s also discovered podcasts. Now she’s a member of that 22% of Boomer listeners. We have Only Murders in the Building to thank for turning some Boomers (ones that subscribe to Hulu at least) into listeners.

In the series, two Boomers (Steve Martin and Martin Short) and an angsty Millennial (Selena Gomez) unite through a shared love of a Serial-like true crime podcast. When someone murders a tenant in their apartment building, the unlikely trio is inspired to make their own show. How they started a podcast isn’t unlikely. It’s a common one: If so-and-so can start a podcast, why can’t I?

Instead of having Gomez’s character tackle all the technical logistics, the Boomers handle everything from selecting the audio gear to getting sponsors. Adventure ensues.

I applaud the writers of Only Murders for putting Boomers in charge of creating a podcast. Martin’s character, a past-his-prime actor, and Short’s character, a failed theater producer, are knowledgeable in the business and art of storytelling. And all they want to do is tell another great story.

So what’s the disconnect between real-life Boomers and podcasting?

It’s a question that can’t be answered unless you talk to Boomers, really. 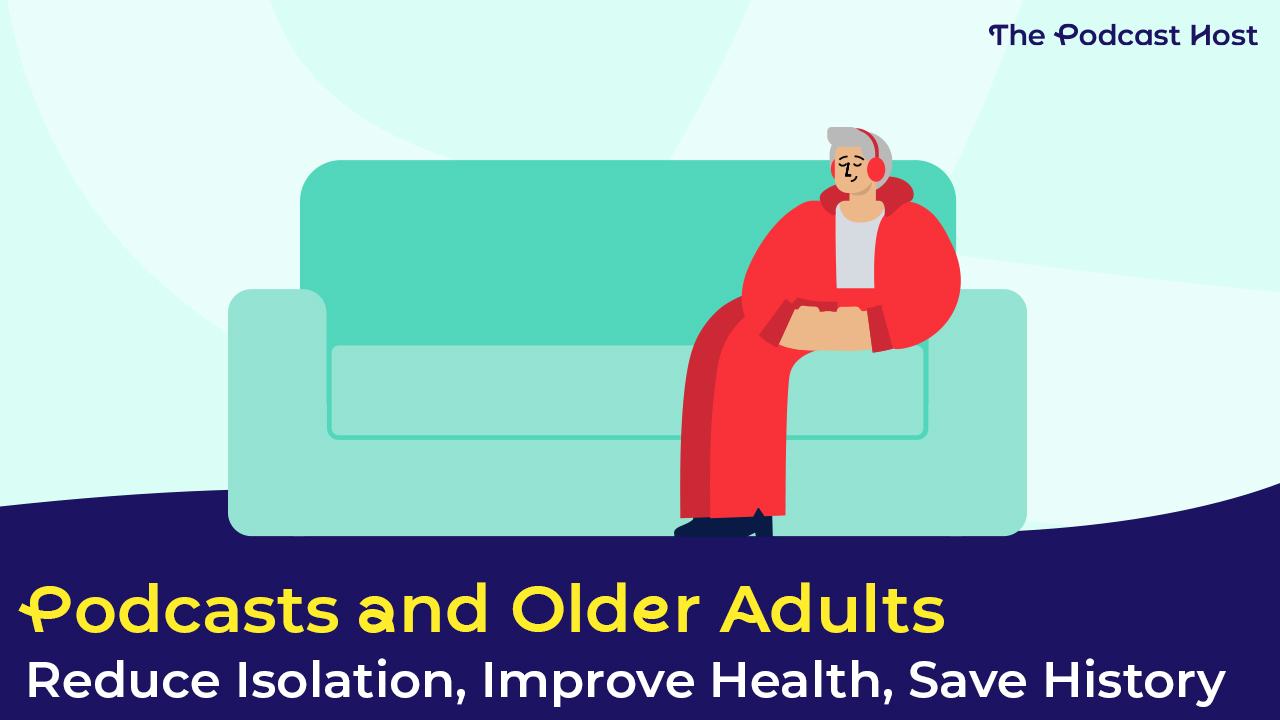 People over age 55 are often excluded from podcast promotion. But, podcasts and older adults go together like Nixon and the end of the draft. Find out more »

Are Boomers Creating in Plain Sight?

Marion Abrams, the founder of the content strategy company Madmotion, thinks that 2% figure may not be accurate. She’s also a member of the fifty-five and over club. And she knows plenty of Boomers creating podcasts.

She tells me, “I wonder if many of them are podcasting but not in the industry, so not finding the survey? I can make some guesses about why numbers would be lower. But not based on [this survey or any other] data.”

When I reached out to my network of podcast editors for more Boomer insight, the number of responses surprised me. Many comments were from Boomers. Many also happen to create podcasts.

Are Boomers in Podcasting Simply Miscounted?

It’s hard to say since this counting has never happened until now. (I’m humming Lizzo’s About Damn Time here) The study’s authors did share the following limitations of the sampling:

Sample: 617 weekly podcast listeners, 18+, who currently produce or have ever produced a podcast

But let’s assume that the 2% figure is fairly accurate. Why then is that number so low?

Helen King of HK Productions often works with Boomers. She thinks the podcast distribution process is difficult for older folks. And it may be one of the reasons Boomers don’t create podcasts.

Helen added, “I think for younger folks or people who have needed to keep up with computers [and] social media, it’s easier.”

I’m forty-five. As I age, learning new technology doesn’t come as easily to me as it once did. It’s easy to forget that Boomers are typically late adopters of technology anyway. That learning curve is often steeper. We see that play out in their podcast consumption trend.

Are we truly thinking about the user experience of older folks when we’re designing tools for podcasters or creating content?

We Don’t Always Speak the Language

How RSS Feeds and distribution work, for instance, often comes with explained a frustratingly over-complicated explanation. I was in my thirties when deciphering the language of distribution brought me to tears. No one at the time explained it like I was five. That was the level I was on technically.

Can we please get more pictures to explain how podcasting works? #askingformyBoomerfriends

Sidebar:  The Podcast Host has a bunch of great articles on how to distribute a podcast and how to get onto Apple Podcasts (and iTunes) and Spotify. Pictures, too.

We forget to meet potential creators not only where they are, but we also forget to consider who they are. There’s currently a focus on bringing young and marginalized creators into the industry (awesome). But there isn’t much happening to attract older voices.

Unlike younger podcasters, Boomers grew up in the heyday of radio. My father introduced me to audio dramas, like The Shadow, via cassette tape in the eighties. Lisa Orkin, a podcaster of unspecified age, grew up in the world of radio. Her father, Dick Orkin, wrote and starred in the (still) syndicated radio show Chickenman. Ira Glass names this show as an early influence.

Pauline Moore, the cohost of Talking Derry Girls and freelance podcast producer, is a fifty-five-plus creator in the UK. She says “many [Boomers] have great stories and experience to draw on.” And she believes when someone motivates her generation to create content, it’s pretty amazing. Lisa Orkin, for instance, has created several shows, most recently Lisa Upside Down, one of the few audio sitcoms available, loosely based on her own life.

But there are gaps between the wealth of life experience Boomers bring to the table and the skills needed to do so. These gaps go unaddressed, especially for folks who have little experience with ancillary skills like project management, websites, and marketing.

Pauline says, “Keeping going with a podcast is pretty relentless!  Especially with the social media input.” She adds that people over fifty want to create, but they also struggle with the how. “They aren’t comfortable with the skills involved.”

Pauline knows many Boomers that are podcast listeners, yet, “many are time poor.” And industry opportunities to develop their ideas into content, in a way that fits into their life, are lacking.

Where are the podcast accelerators for Boomers?  Why are we not going into retirement communities, for example, to truly bring the joy of podcasting to all? (I’d love to hear from you if you do that)

Boomers need to know that podcast creation can work in their life. It starts with a simple idea: Marketing to Boomers. Using images of people who look like them, for instance.

Then keep it simple by introducing Boomers to podcasting tools that don’t require a separate course to learn.

They have more money to spend. In 2018, Visa pointed this fact out. saying,

“…baby boomers (those born between 1946 and 1964) have continued to dominate consumer spending in the U.S. In fact, consumers over 50 now account for more than half of all U.S. spending. They are also responsible for more spending growth over the past decade than any other generation, including the coveted millennials.”

Yet, non-Boomer podcasters don’t get excited about attracting a large audience of people that could be their parents or grandparents. Boomers, who often spend money on their interests, are rarely a show’s avatar.

Excluding them as potential listeners and podcast creators is a mistake. Remember that negative feedback loop? If we want to grow listenership, we must bring Boomers into the industry as creators.

The question we need to ask is:

How do we bring Boomers into podcasting both as listeners and creators?

Boomers Have More Living (and Storytelling) to Do

And podcasting gives them a chance to do just that. Marion says it was because podcasting offered a platform that she started creating them for clients.

“My client always wanted to get his message out and if he couldn’t get it picked up by media, we started finding our own ways to find the audience,” she says.

Podcasting also offered her a chance to connect with creators on her own show, Grounded Content, without having to fight social media algorithms or time limits. She adds, “I love the creative expression and opportunities to experiment.”

For listeners, Boomers bring a rich, historical context to the world we live in today. Last year, I worked on How Magicians Think, whose second episode featured the story of a Holocaust survivor. This started my Boomer-Podcasting thinking.

The liberation of Auschwitz happened over three-quarters of a century ago. The people that experienced historical events and who have those stories to tell won’t be able to tell them forever.

And then show her how to use it.

We know diversity enriches the podcasting space. So it’s critical that we expand our focus to include Boomers. That doesn’t mean Zoomers need to create shows for AARP (American Association of Retired People). Nope.

It means we need to consider our Boomer audience members. We need to consider Boomers as potential creators; engage them and educate them with workshops and programs that meet them wherever they are.  We need to literally create things for them using their language.

And are they calling themselves Boomers?

And most of all we must encourage them to tell their stories.

Because, in the vein of Monty Python’s Holy Grail, Boomers aren’t dead yet. In fact, they’re very much alive. They just aren’t podcasting. 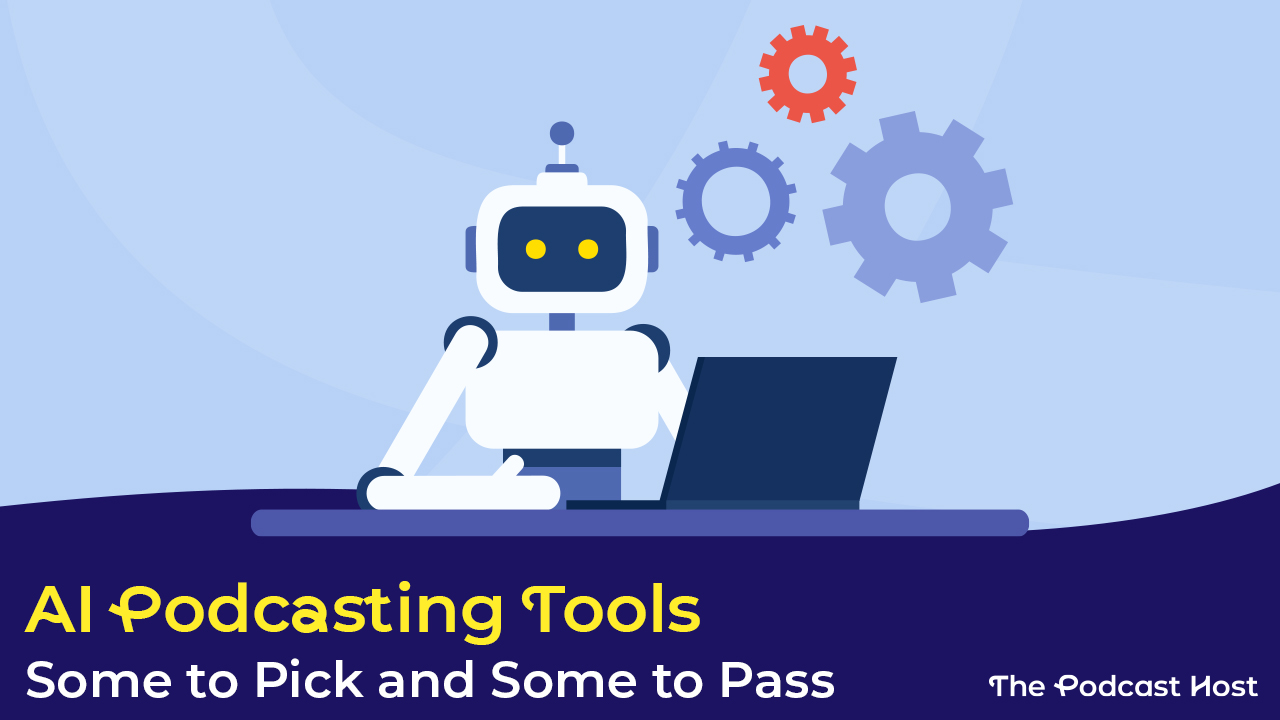 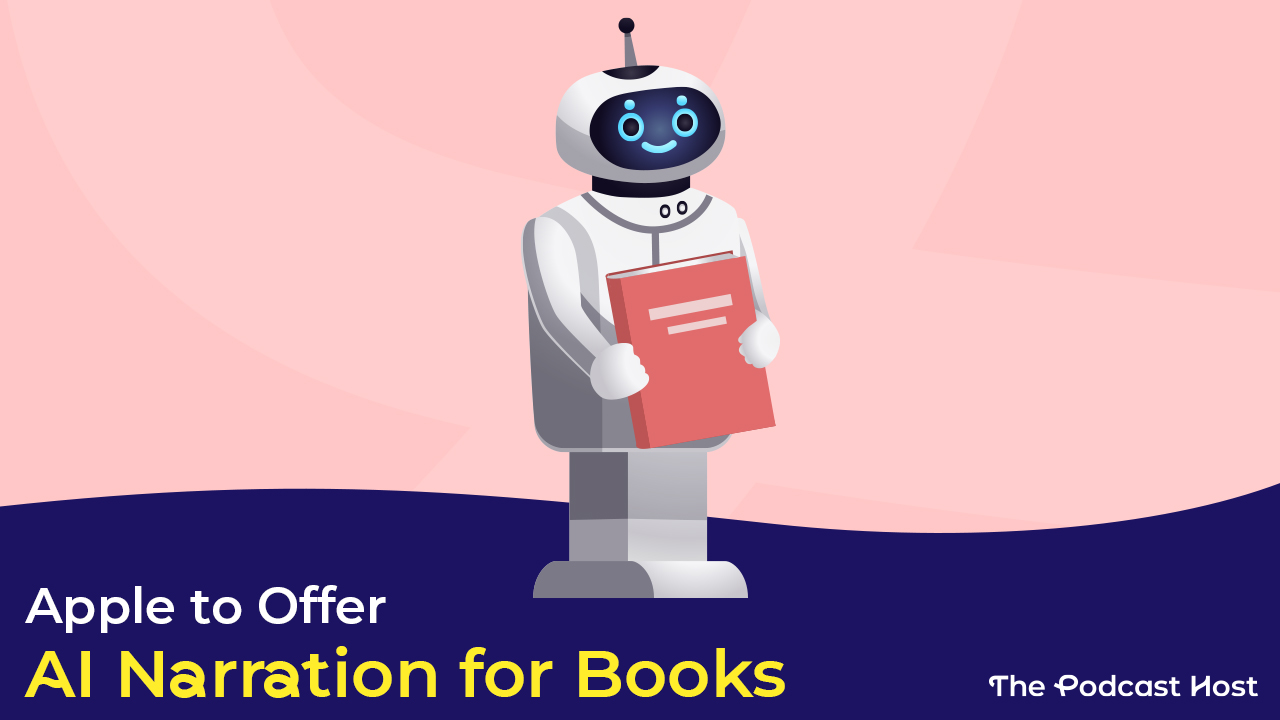 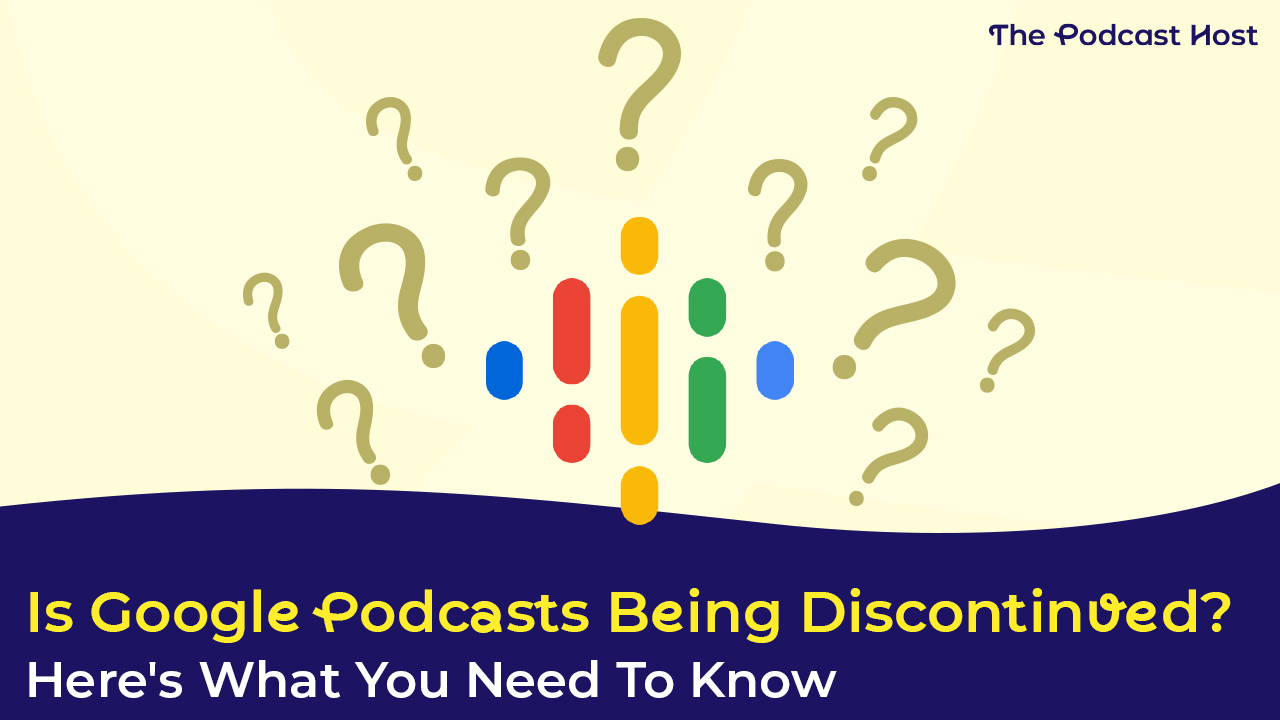