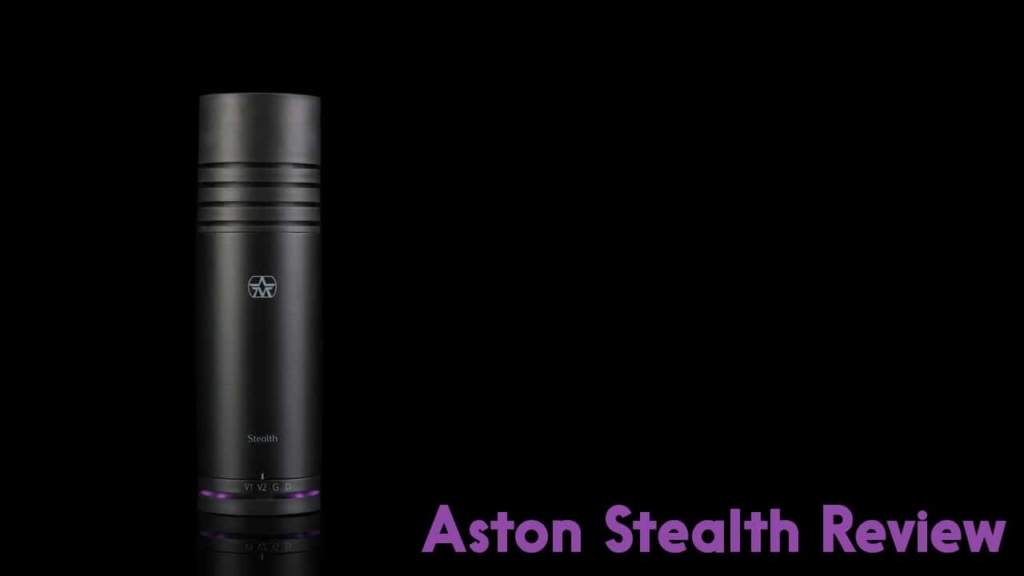 “Aston Stealth” might be a really good name for a private detective, but it's actually the name of a sleek new microphone on the market.

The company got in touch with us recently to see if we'd like to take a look at one. Of course, we were more than happy to oblige.

So what's the deal with this mic? How did we get on with it? And is it a piece of kit you might consider getting for your own podcast? Read on and find out.

The Aston Stealth comes in a nicely packaged and designed box. The mic itself has quite a minimalist design, which I think gives it a clean and elegant look.

It's a sturdy and robust feeling mic with a bit of weight about it. It's matte black in colour, with some very unobtrusive setting controls at the bottom of the neck. We'll talk more about those shortly.

Below those controls there's a ring running round the mic that lights up when Phantom Power is activated.

But… this is actually a dynamic mic, so why would you need Phantom Power at all?

How Does the Aston Stealth Work?

Firstly, what's all this about ‘Phantom Power'? Is he the nemesis of Aston Stealth, PI?

To give you an understanding, when I say the Aston Stealth is a “dynamic” mic, this simply refers to the way it's built and how it functions.

The most common alternatives to dynamic mics are “condenser” mics. When you plug a dynamic mic in to something like a mixer or digital recorder, it just works straight away. But when you plug a condenser in, you need to press a button on that device to activate Phantom Power in order for it to work.

Because dynamic mics don't have the extra oomph given by Phantom Power, they tend to be a wee bit quieter. As a result, folks will turn up the gain – the recording volume – on their mixer or recorder. That can sometimes result in elevated levels of hiss or noise underneath the vocals though.

Some podcasters combat this by adding an additional preamp like the SS-1 in between their mic and mixer/recorder. These ‘amplifying' devices can help boost the signal of the voice without bringing all that hissing noise up with it.

But the Aston Stealth has one of these gain-staging preamps built in to the mic itself. You simply switch it on and off by toggling the Phantom Power button on your mixer or recorder. They've labelled these two options “active mode” and “passive mode”.

This is a really nice feature which lets you record a solid signal, without turning your gain very high at all.

This means the Aston Stealth is very much a solo mic. If you're recording more than one person, they're going to need their own mic too.

Other Features of the Aston Stealth

I've already mentioned the settings on the mic. Let's take a look at these now.

Aston market the stealth mic as “four professional microphones in one.” You toggle through these by twisting a ring at the neck of the mic, to select your desired setting. They are:

Aston are keen to point out that these aren't destructive EQ filters, but “contour networks.” It sounds like this is more about the different nuances of how the audio is recorded, as opposed to adding effects or processing to it, during recording. Ultimately, it should give you a lot more flexibility in post-production.

The Aston Stealth comes with a mount which slots into the base of the mic. You can use this to set it up on your boom arm or mic stand.

To be honest, this mount feels a little flimsy. For the look, size, and weight of the mic, I think there's room for improvement here.

So, how much will the Aston Stealth set you back?

Prices vary, depending on where you look, but at time of writing you can get one for $400 on Amazon, or £270 on Amazon UK.

Here's a completely unprocessed sound sample featuring all four settings, as well as active and passive mode. You can also hear how it handles with plosives, rejects noise from around its back and sides, and copes with a bit of handling noise.

I was recording into the Yamaha MG10 mixer.

There seems to be a setting here to cater for every voice and use, and the built-in preamp is a really nice feature.

The mic mount itself isn't the best. But, I don't think that's a deal breaker.

Of course, its cost puts it in the “premium” range for podcast microphones. The Aston Stealth is definitely not a beginner mic. You don't need to spend anywhere near that much to get started.

But, if you've been in the game a while now, and are looking to invest in your sound quality, then this mic is absolutely worthy of your consideration.

Naturally, you might be looking to shop around a little more before making a decision. If that's the case, check out our Best Podcast Microphones roundup.

If you need more tailored help in choosing your podcasting gear, or with any other aspect of starting and growing a podcast, check out The Podcast Host Academy.

There, you'll find all our courses on everything from equipment and editing to promotion and monetisation. There's also a tonne of downloadable resources, checklists, and guides, an active community, and we run regular live Q&A sessions. You'll never get stuck on anything again!