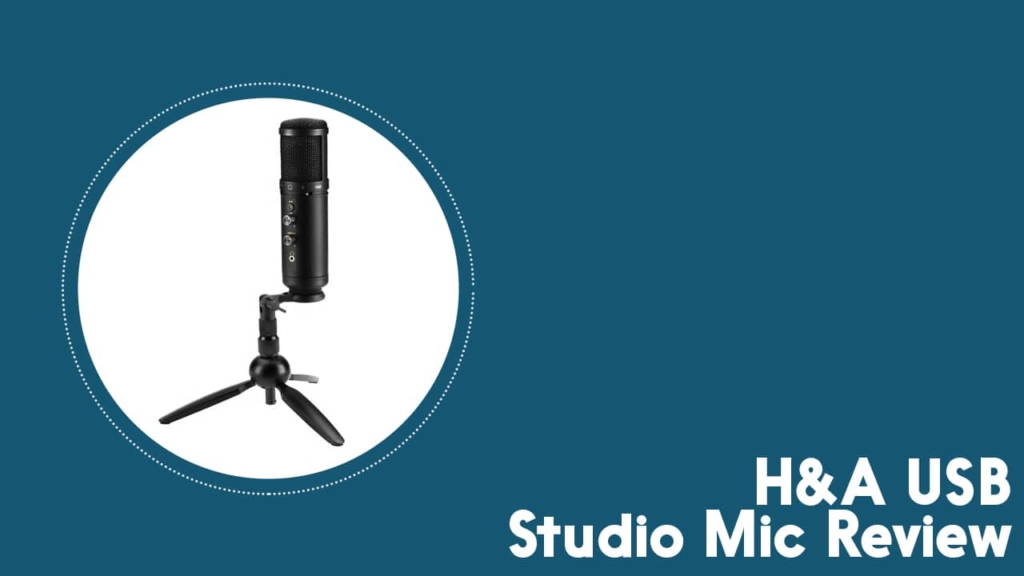 This is a sponsored post from Adorama, a leading photo and video brand and 40+ year industry veteran. Here, we'll be reviewing the H&A HA-UPM – a professional USB studio mic for podcasters and voice-over artists.

USB mics used to be seen as the poorer cousins of their analogue alternatives. But in recent years, the quality of these plug-and-play devices is raising the bar.

A USB mic is a great option for a beginner podcaster, because it keeps things simple, and you don't need multiple bits of kit.

Traditionally, podcasters would “advance” after a year or two and ditch their USB mic for a mixer or interface, and an XLR-based setup.

These days however, more and more creators are sticking with their USB mics, as they're more than happy with the recordings they get from them.

We test out and play with a lot of USB mics here at The Podcast Host. The latest one that's been getting the once-over in our studio is the H&A HA-UPM.

One thing that immediately jumped out to me, before even opening the box, was the name. “HA-UPM” doesn't exactly roll off the tongue, and isn't very memorable.

If you think about the Blue Snowball and Blue Yeti, they are far from the best mics in the world. But almost everyone has heard of them.

Hammer & Anvil is what the “H&A” part stands for, and these are a line of mics exclusive to Adorama. I'd have maybe made more of this when naming the mic, rather than abbreviating to a bunch of letters. If a mic was called the “Mighty Blacksmith” or something like that, I bet it'd be a top seller…

You can quickly set up the mic and be ready to go, right out of the box. It comes with a robust little tripod stand. There's also a swivel collar mount, which you can attach to a boom arm, if you prefer to use it that way.

The swivel mount gives the user a lot of flexibility in the positioning of the mic. This is good to see, as many USB mics mounted on desk stands can be pretty static.

Another positive feature that jumped out was the length of the USB cable. This means you'll have no trouble using the mic on a boom arm or mic stand. Plus, it lets you get the mic far away from any noisy fans whirring away in your computer.

There's a number of buttons and dials on the HA-UPM. They're all positioned on the front-facing side, which make them easy to access and adjust.

There's a headphone jack for active monitoring. You can control the headphone volume from the mic itself, too.

Above that dial, you'll find a gain dial. “Gain” is basically your input volume level.

There's a mute button too. Ironically, this is perhaps a bit louder than I'd have liked, as it clicks on and off when pressed. Your audio will pick up the noise of this, which defeats the purpose of a mute button.

A workaround here would be to turn the gain down first, but if you've turned the gain down, there's probably no need to hit the mute button.

There's a Low-Cut switch you can use if you're prone to popping the mic. This can help minimise unwanted low rumbling frequencies in your audio.

The final switch to mention is a 10dB sensitivity setting. If you wanted to record live music, or a particularly loud source, you could activate this to help keep your levels in a normal range.

The HA-UPM has a Cardioid polar pattern, designed to pick up the voice of the user in front of it, whilst aiming to reject sounds around its side and back. Here's more info on polar patterns, if you're after some bedtime reading.

Our mic came in a nicely designed protective carry case, which houses the stand kit, and the cable.

You can get this, along with a set of H&A studio monitor headphones, for $89.95, which is only $10 more than if you bought the mic on its own.

The HA-UPM is a condenser mic, optimised to record the nuances of a vocal performance. Condenser mics work better in environments free from reverb, and without too much distracting background noise.

Here's a sample of the mic running into Audacity. I didn't apply any cleaning or post-processing to the audio afterwards.

The H&A HA-UPM is a good sounding bit of kit, at a very affordable price range.

It has a durable and robust build. This gives the user a lot of options when it comes to setting up and positioning the mic. The carry case is also a nice feature, and the option to get a pair of studio monitor headphones for only $10 more means you can get a full podcasting kit, for well under $100.

As for minor gripes… I wouldn't want to use the mute button mid-recording as it creates a loud click in the recording. And the name too – it feels they've missed a trick here by not calling it something instantly recognisable and memorable. It'd be a shame if that was to hamper the commercial success of what is a really decent piece of gear.

We hope that this has been a useful review, as you seek to find the best USB mic option for you. We'd also like to thank Adorama for sponsoring this content, and would encourage you to go check them out!