On this site, we talk about microphones… a lot.  Condenser and dynamic models are the most common.  But did you know there are several other types? One, in particular, can be very useful for the podcaster on the go.  Packing up your podcasting gear to an onsite interview, or even changing rooms, can be a hassle with all the components that make up a rig.  This is where a wireless microphone system can be helpful.  In this article, I will be taking a look at the new wireless microphone system from Maono, the WM820.

A wireless microphone system is comprised of two things:

Note: For example, WIFI uses 2.4 GHz or 5GHz.  All this means is the rate that a frequency vibrates at.  At any given moment there are millions of signal vibrations traveling through the air. Since the human ear cannot perceive in the Gigahertz level, this is why we don’t hear them.

Out of the Box Impressions

This little wireless system kit comes with an impressive amount of goodies in the box.  You have the transmitter (with built-in mic) and receiver, a fluffy windscreen, a pouch for storage, two USB cables for charging the receiver and transmitter, a cable to record to a phone via a 3.5mm jack, and a cable to connect to a DSLR camera.

The connection cables are labeled, so you cannot get them mixed up.  The transmitter and receivers are really light, too.  When wearing the transmitter/built-in mic, I could hardly notice it. 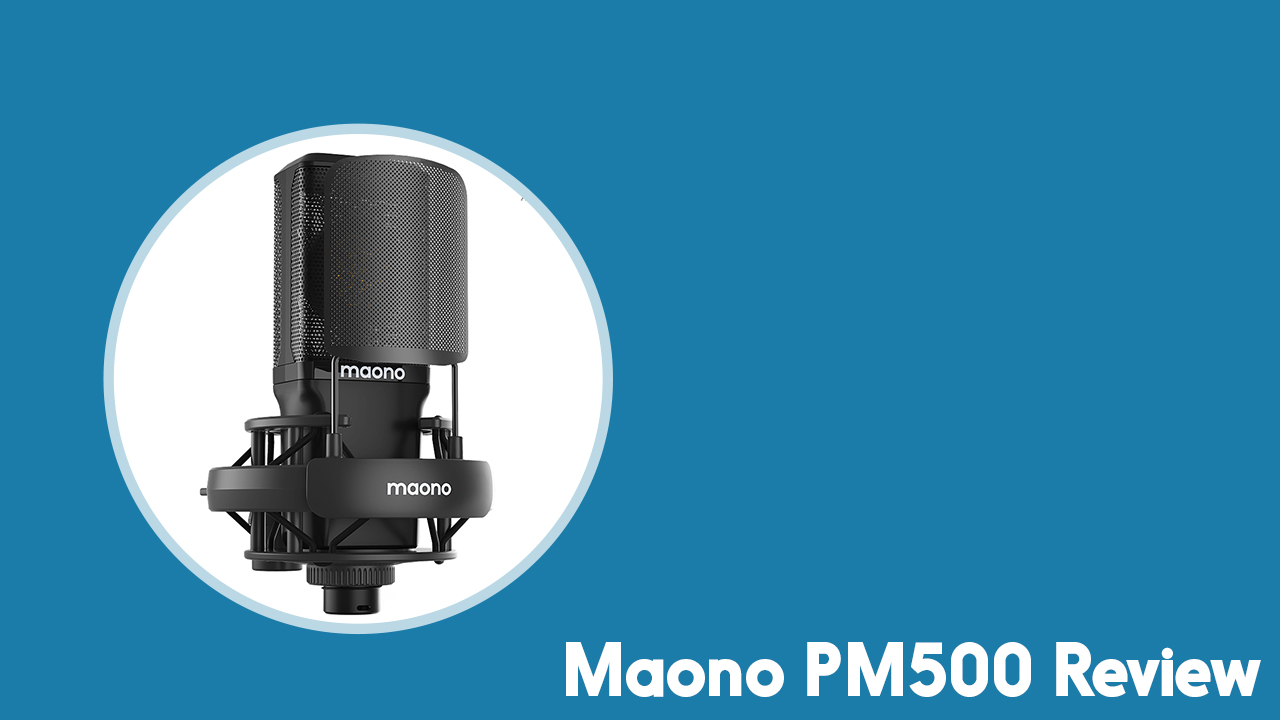 The Maono PM500 has a clean and clear tone for the voice. Is a the right podcast mic choice for you?  Find out more »

This system pairs very easily.  Turn the power on the transmitter, then to the receiver. The lights on both units should stop flashing and become solid. That’s it!

This one was a bit funky.  After trial and error, I found that the “volume up and down” buttons not only control the headphone volume but affect the input gain.  If I set it all the way down, the recording signal stopped in a freeware recording app I was using.  However, despite having the “volume” as low as possible, it was still clipping constantly.

This system operates on 2.4GHz for transmission.  This means it overlaps with your everyday WIFI signal.   Even with my phone’s signals completely cut off, I was still picking up interference.  This took the form of high-pitched screeching, as you can hear below.

Below is a spectrogram of the interference. The solid horizontal bars are the “screeching” that was introduced by nearby WIFI signals.

Note: Newer phones will require a headphone jack adapter to plug into the jack when used as the recording device.

The main problem I faced was a lack of input gain control (this is more of my audio engineer brain making a stink and for some users, this may not be a big deal).  You can get around this issue by recording into a DSLR camera that has onboard preamps, OR do what I did – I used my interface.  You can get this kit to record into your interface with an adapter.

For this test, I used a 3.5mm (TRS) female microphone adapter to 3 pin XLR male connector.   I used the cable labeled “camera”, plugged that into the adapter, then into the interface. Voila! I could now better control the input gain.

Note: I had all WIFI signals from devices around me switched off during this test which resulted in no extra noise. However, having the receiver sitting on top of the interface caused some screeching and crackling. This noise subsided after placing the receiver on a table.

This kit is advertised as being able to transmit up to 50 meters. I put this kit through a grueling test.  First, I recorded through my permanent recording rig while I walked down some stairs and into the backyard. With an obstruction such as a house, it was able to transmit about 25 meters but was dropping out constantly. You can hear it drop out, reconnect, and drop out again in this sample.

For the second distance/ outdoor test, I used a Zoom H6 with the adapter and set it on a table on my patio.  For this test, I was able to reach a full 50-meter distance with zero drops with a clear line of sight to the receiver/H6 (no buildings as obstructions).

I was pleasantly surprised that the windshield was able to protect the mic from the wind, with the breeze that was around me.

Other Things to Watch Out For

I would like to be clear in that the following is an issue all lav mics have – “lav rustle”. Make sure, when using the built-in mic from the transmitter, that it is securely fastened to your person. Any sort of movement will be picked up. I did a movement test where I walked around.

The size of the transmitter is small and light for a transmitter, but bulky for a lav mic. It will still move around on you when you are moving about. The built-in mic is best suited for sit-down scenarios. 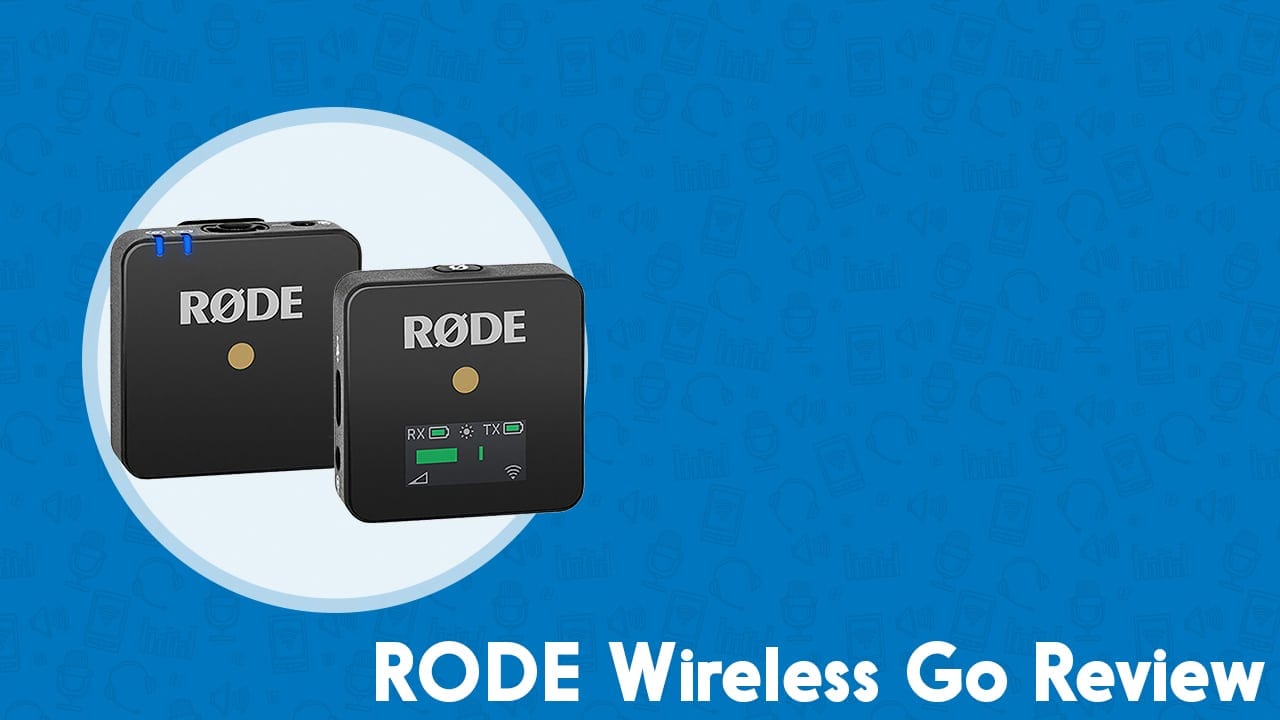 The RODE Wireless Go is a flexible and portable option for recording your show. Anytime, anywhere Find out more »

This is a neat little system.  The Maono WM820 is a great entry point for interviewers.  I found it worked best when recording into a device that has preamp control, such as an interface or the Zoom H6. It does have the distance it boasts – as long as there aren’t too many obstructions. The tone isn’t warm, but it isn’t overly thin either.  There weren’t any drastic changes in recording quality with increased distance with a clear line of sight to the receiver.

It does pick up a bit more of the room/surroundings, but that’s expected of an omnidirectional pickup pattern. All in all, the WM820 from Maono is definitely worth checking out for the stationary podcaster.  Not having a mic in the face for in-person guests can really help a guest be more relaxed and conversational if they’re nervous or not used to being around recording equipment.

Need more microphone recommendations for your podcast? Check out our review of the Shure MV7 or the Rode PodMic. Still want more? Check out this comprehensive podcast-focused guide of microphones. Don’t forget, we can always help you with all aspects of podcasting in The Podcast Host Academy.