December 2020 update – Zoom have just released the PodTrak P4. It’s a little podcast recorder that does everything a mixer can do, though in a much simpler and more accessible way. If you’re intrigued to find out more, check out our full review of the Zoom PodTrak P4.

The Samson MXP124FX (Or UK Link) is a USB or digital mixer, which is part of the company’s MXP range. It has an analogue alternative in the form of the MXP124 for those who don’t want to work directly into a computer.

There are also bigger versions of both, with more inputs/channels – the MXP144 and the MXP144FX.

Each model has more similarities than differences, but it’s the MXP124FX that we’ll be taking a look at in this review. 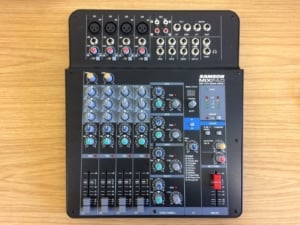 Firstly, you don’t need a mixer to podcast, but there are a few good reasons why you might want one.

They’re really handy for recording Skype and other types of calls, either directly into your computer, or into your digital recorder (or both).

It also gives you the option of adding multiple mics, which can come in handy if you have guests or co-hosts.

Not only that, but you can record your show “as-live”, playing your music and effects in real-time. This can save you adding everything in later on, during post-production.

If you’re recording with someone over Skype, you can set up a mix-minus so that they can hear all the music and effects too – giving the episode a real “live radio show” feel.

There are a lot of buttons and dials on mixers, which can make them confusing at first.

But don’t worry! The good news is they all pretty much work in the same way, so once you’ve used one you’ll generally know what you’re doing.

So what are all these different controls, features, inputs, and outputs on the Samson MXP124FX?

There are four MDR (Maximum Dynamic Range) microphone preamp channels on the mixer. Each has the option to take an XLR input, or a 1/4″ TRS input.

Two of these channels have built-in compression dials, giving you the option to apply compression during your recording, as opposed to later on in post-production.

These four inputs have their own independent gain controls for setting your mic’s sensitivity, as well as individual volume faders along the bottom.

There’s a High Pass Filter button on each channel that gives you the option to cut off frequencies below 80Hz. This is handy for preventing low rumbling sounds or wind noise from creeping into your recordings, depending on where it is you are at the time.

You might want some more detailed and flexible control over your audio frequencies though, in which case there’s a three band EQ on each channel. This means you can boost or reduce the low, mid, and high frequencies in your recording.

The FX dials can be used to increase or shut off the amount of signal being sent from each channel to the audio’s destination (eg; your computer or digital recorder).

There are also panning dials, which you can use to send each signal to the left or right of a stereo recording.

Each channel has an LED light to alert you if your audio is peaking, so that you can adjust your levels accordingly.

There are four stacked stereo channels which take 1/4″ stereo Y inputs. This is where you would feed in audio from another source, like a computer or smartphone.

These channels have a few of the same features and controls found in the mono versions. An FX send (which comes in handy if you want to do a mix-minus), panning and levels dials, as well as the LED peak lights.

There’s also a set of RCA “Tape In” ports for bringing in audio from CD or MP3 players, computers, Hi-Fi systems, and general consumer-level equipment. 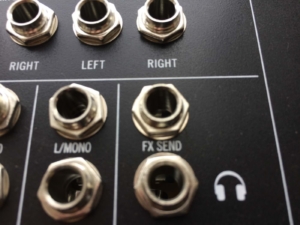 Now that we’ve looked at the various ways to send audio in to the mixer, what are the options for bringing it back out and sending it to your digital recorder or editing software?

The Samson MXP124FX is a bi-directional USB interface, meaning it can send audio to your computer via the USB cable itself.

The 1/4″ FX Send port (AKA Auxiliary Out) will also send audio out. Normally this would plug into your computer’s 3.5mm mic input.

There are also two sets of 1/4″ stereo out ports titled “Main Mix” and “Mix 2”, so you can hook your mixer up to a set of monitors and a digital recorder (with two combo ports) at the same time. Or you might want to have two sets of monitors hooked up in different rooms.

There’s another 1/4″ out specifically for headphones, and the RCA “Tape Out” can be used to send audio to the same devices listed when we talked about the “Tape In” ports.

You can control where a signal is being sent to by pressing either (or both) of the Tape/USB buttons “To Mix 2 + Phones” and “To Main Mix”.

With regards to multitrack recording in your digital audio workstation (DAW), the outputs are routed from the mixer’s master channel, meaning it sends out a stereo signal as opposed to discrete outs from each channel.

If you want to record a Skype call directly into your DAW (Audacity, Audition, etc) there’s one wee thing to be aware of.

You want to set the mixer (usually listed as USB AUDIO CODEC) as both the input and output inside your recording software.

However, in your Skype preferences, you only want to set it as your input, and not as your output. Set your output as your computer’s audio driver (eg: Realtek) instead.

This means you can send the audio from Skype into one of your stereo-in channels and pan it to the left or right, before panning your own mic in the other direction.

Your call will then be recorded on opposite sides of a stereo track, giving you a lot more control in post-production.

If you have your Skype output set as the mixer, the Skype audio will travel there via the USB cable instead. This means the audio from the computer/Skype would record on both sides of your stereo track.

The Samson MXP124FX has a +48v phantom power button for powering and using condenser microphones.

The mixer also has 100 24-bit low noise digital effects built in to it. These give you the option to add effects (reverb, etc) to your audio as you record. There’s an on/off button to activate the effects mode, and a dial to toggle through each one.

I have normalised both files, but applied no effects, cleaning, post-processing, etc.

Recorded with the Shure SM58

Recorded with the AKG C214

This is a nice, robust, portable interface. Like any Samson product I’ve worked with, there’s a noticeable level of quality and attention to detail in there.

It’s a good option for someone looking to buy their first mixer, though the lack of multitrack recording options is something that should be taken into consideration first.

However, when it comes to solo, co-hosted, “as-live” or Skype interview shows, the Samson MXP124FX (Or UK link) will serve you well, for sure.

Still shopping around for the right mixer though? Check out our best podcasting mixers roundup for more great options.