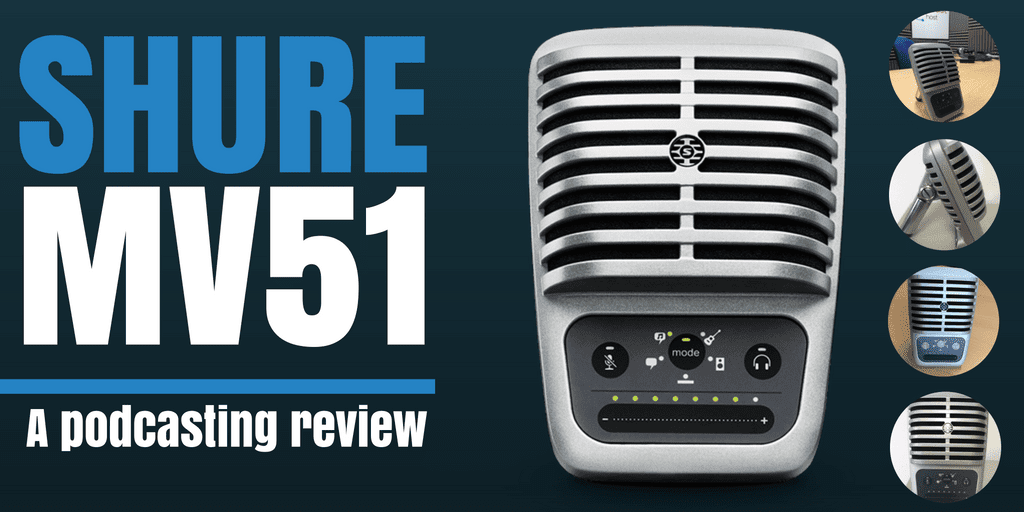 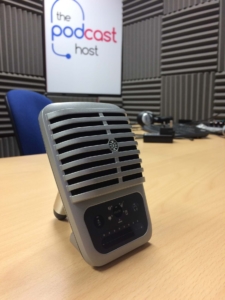 The casing does give the mic a robust, almost invincible feel – and knowing Shure's design ethos it probably is.

The MV51 has a real retro look to it. There's a control panel on the front, and the mic is supported by a stand on the back for use at a table or desk.

It rests on two rubber shockmount pads, under the main mic body and the stand. The pad under the stand can be removed and the mic can be screwed onto a mic stand or boom arm if you prefer to record in that way.

The Shure MV51 as a USB Mic

‘Plug & Play’ mics like the Blue Snowball or Blue Yeti are incredibly popular in podcasting. Most people aren’t sound engineers or audiophiles after all, and would rather concentrate on their content than mess around with equipment and gear.

You can have the MV51 unboxed, set up, and plugged into your computer in about a minute. Then, you just need to download Audacity (which is free), hit record, and away you go.

The Shure MV51 as a Mobile Mic 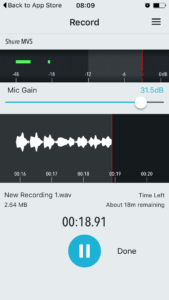 This is where the MOTIV range really excels above their USB-only rivals. You don’t even need a Mac, laptop, or PC to record with them.

Shure’s free Motiv app can be downloaded to your iPhone from the App Store, and turns your device into a little recording interface.

Once you’ve connected the mic to your iPhone (via the lightning connector provided with the MV51), opening up the app will power up the mic and you can start recording immediately.

Inside the app you can can control your mic sensitivity with the gain slider, and monitor you input recording levels.

You can apply a limiter to prevent clipping. You can also choose to apply compression to give you a more consistent volume level throughout your recording, as well as boost or reduce certain frequencies in your recording with a little EQ interface. 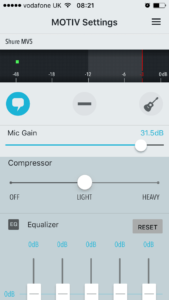 If you don’t have a clue what any of this means, here’s a simple explanation. Short answer though, just select 16/44.1 kHz and forget about it!

You can only record/save your audio in WAV form in the MOTIV app, so it isn’t a one stop shop for creating a ready-made podcast episode.You can upload your file to Dropbox to apply the finishing touches in your computer’s editing software, or you can use it in conjunction with something like Bossjock Studio.

Around the back of the MV51 there are 2 ports, one for the USB connection where you'll hook up the mic to your iPhone/iPad/PC, and the other for your headphones (3.5mm).

On the front there's a control panel which gives you access to a number of settings without having to go into your DAW or MOTIV app to change. 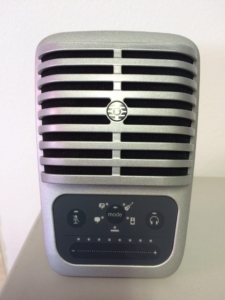 There's a mute button that can be toggled on and off.

There's a volume slider along the bottom. When this is lit up in green, it controls the gain (mic sensitivity) of the recording. If you press the headphones button, it'll then turn orange and control the headphone volume instead.

There's 4 recording presets around the centre of the panel.

There's a 5th option here – ‘Flat', which means no processing at all. With this mode, you'll set everything manually and apply any other processing to your recording later on in post-production.

Here's two sound samples that haven't had any post-processing applied at all, though the mobile version had light compression on in the MOTIV app whilst recording. Both were recorded in the office without any sound treatment.

The MV51 as a Mobile Mic

The Shure MV51 is undoubtedly a good all round mic. It's hardy and robust, flexible, and has a great sound quality to it.

I asked at the beginning if it was worth paying more for the MV51, or opting for the cheaper MV5 instead.

The most important factor in any mic is its sound quality. But can the average person hear much difference in spoken word recordings done on both devices? I'll let you listen to my sound samples and decide for yourself.

Though the MV51 is small enough to consider “portable”, it's heavy enough that you'll definitely notice it when you're carrying it around in a bag. I'd say it's certainly more suited to permanent and semi-permanent setups.

With the MV51's control panel, there's a few more options at your fingertips during recording, and if that's something you're keen on then it might be the choice for you.

I'd imagine that for the majority of podcasters though, the MV5 would be the logical choice between the two.