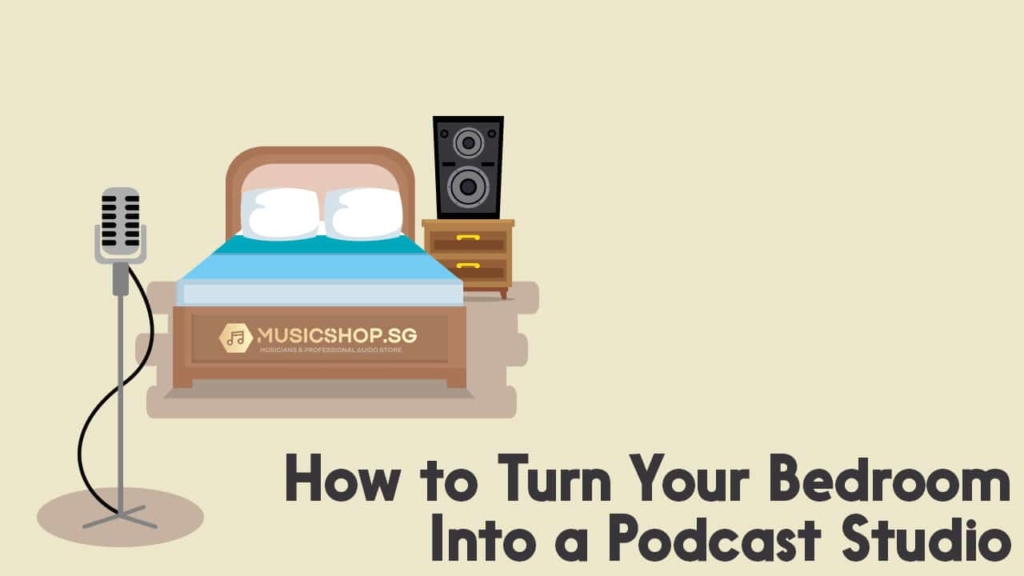 This post is sponsored by MusicShop.sg, a Singapore based online retailer for musical instruments, equipment, speakers, sound systems, sound mixers and more. There's a huge overlap between music and podcast gear, and MusicShop stock an impressive array of kit. So if you wanted to turn your bedroom into a fully fledged podcasting studio, what might your shopping list look like?

In decades gone by, recording studios were somewhat mystical things, seen and used by very few. If you worked in radio, or as a musician, then you might've visited one before. It was probably pretty expensive to hire, and certainly very expensive to put together.

These days however, it is possible to build a pro-level recording studio in your own home, and on a modest budget.

Do You Need a Fully Fledged Podcast Studio?

Granted, the shopping list below goes far beyond the needs of most new podcasters. It really applies to folks who've been podcasting for a while now, and want to invest in a serious kit upgrade for their show.

If you're an aspiring podcaster, then simply getting an AT2005 would be more than enough for your needs at this stage. This mic from Audio Technica can be used as both a USB, and an XLR. You can start off by using it as a USB mic for solo episodes and Skype interviews. Further down the line though, you might want to upgrade your setup to include some of the gear below – and that means you can still use your AT2005 in its XLR form.

If you've come to a point where you're looking to move away from a single USB mic setup, then here's some of the gear you might want to consider.

Microphones themselves need no real introduction. The most complicated thing about them is simply how many there are on the market these days. It isn't hard to find good mics, but it can be hard to actually choose one.

So, to keep this simple, let's spotlight the Audio Technica AT2020 . This is a very affordable condenser microphone, with a wide dynamic range. You can run with one if you're doing solo or online interview episodes. You can add another if you're working with a co-host locally, or bringing interview guests into your studio.

You still have the option of recording into your computer with XLR mics. You just need to go via a USB audio interface. This means you can still do those Skype interviews, but with better sound quality than you'd get from a USB mic. You can also run both your XLR mics into your computer, and record on two separate tracks.

For interface options, I love Focusrite Scarlett 2i2. I've used one for years. Here, you'll actually find it available as part of a bundle, along with the Scarlett Studio condenser mic, a pair of monitoring headphones, and an XLR cable.

A mixer is similar to an audio interface in many ways. At base level, it's somewhere to plug your XLR mics into.

Where mixers stand out, is in their ability to run your podcast live, or “as live”, adding in your music, sounds, and other elements in real-time. This is as opposed to editing them all in later, after the recording has happened. You can also capture online calls via a mixer, without having to rely on call recording software.

Mixers come in USB or “analogue” form. Mixers themselves don't tend to record audio, so you need to run them into something that does. For an analogue model like the Behringer Xenyx 1002B 5 channel mixer you could record into a digital recorder, which we'll cover below.

This Behringer is light and portable. You won't be restricted to home or studio use. You could easily pack it up and take it on location if need be.

If you're looking for something to record and store your audio (other than your computer), then it's worth considering a digital portable recorder. These are basically little handheld recording studios in their own right. You can pretty much take and use them anywhere.

At The Podcast Host we use the Zoom H6, which is the gold standard for digital recorders. You can run four XLR mics into it, with the option to add more. Or, you can simply record into its on-board mics. These are really handy for grabbing quick interviews with folks, at events or conferences.

Inside your studio, you'd run an analogue interface or mixer into your recorder. You can also bypass either option, and run your XLR mics directly in to it. They're extremely flexible.

It's good practice to use studio headphones whilst recording. They're equally handy for editing your audio. You can go as simple as a pair of earbuds, but long term, it's worth investing in a quality pair of over-ear ‘phones.

Many consumer headphones are unsuitable for audio production, because they add elements to the audio that aren't actually there. Increased bass, for example.

For my sound design work, I've been using the ATH-MX20s for years now, and I love them. On top of being a great bit of kit, they're extremely affordable too.

Some producers prefer to edit with studio monitors, rather than headphones. Or, you can combine the two, depending on which stage of post-production you're in.

Editing with monitors is advisable if you're working with highly-produced podcasts. These are things like documentaries or audio dramas. Basically, shows that combine lots of different elements – music, sound effects, dialogue, etc.

For a studio monitoring option, I've picked out the PreSonus Eris E3.5.

Regardless of which setup you opt for, you're going to need some XLR cables to tie it all together.

An XLR cable will link a mic to a mixer or interface. It'll also take the audio out of that interface and feed it to a digital recorder. They are integral pieces of the recording chain.

Many podcasters are guilty of spending big on expensive kit, only to link it together with $3 cables. You don't need to spend a fortune on cables, but it's a good idea to avoid bottom-of-the-range models. If you were taking your mom out to lunch at a nice restaurant, would you take her on a skateboard? Maybe, but a really good skateboard.

You'll be in good hands with the Samson Tourtek XLR cables. Samson are one of the top audio gear manufacturers on the market, and these have been built with musicians and sound designers in mind.

That said, studio recording bundles are available if you'd prefer just to dive in and make a quick, one-off purchase to get up and running. Again though, this will depend entirely on your own approach and preferences.

We hope that this has been a useful tour around some of the kit you might want to consider for your own podcasting studio. We'd also like to thank MusicShop.sg for sponsoring this content, and for helping podcasters navigate the choppy waters of equipment-choosing!