Mobile and portable recording appeals to many podcasters in the medium.

Not being tied down to any one space gives you freedom and flexibility, and allows you to record your content as and when the opportunity arises.

Traditionally the trade off here has either been to carry around at least a couple of bits of bulky kit, or sacrifice on your audio quality a little.

The Samson Go Mic Mobile is a mobile recording solution that utilises wireless mics, making it even more flexible than the other options in this arena right now.

But does this flexibility come at a cost? Are there any downsides? Let's take a look right now… 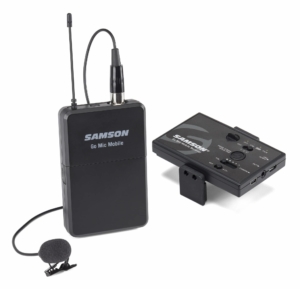 A smartphone is often the most expensive piece of equipment the average person owns. And as smartphones have the capability to record audio (as well as video) it seems obvious that they should be utilised to create podcasts.

Recording directly into a phone through its built-in mics won't give you a “bad” sound quality, if you're close enough to it. But consistently good mic technique using only a phone is virtually impossible. They just don't have the shape or design to be set in an optimal recording position for long periods of time.

Lavalier mics, on the other hand, are one of the easiest mics to use because they pin to your clothing, or the clothing of your guest or co-host. Once a lav mic is on, and you've started recording, you can pretty much forget it's even there.

The Samson Go Mic Mobile lets you use lavalier mics with your smartphone. This is already possible with gear like the Rode Smartlav+, which I'm a big fan of. But you could still find yourself restricted by wires using this setup – and that's where the Go Mic Mobile steps in.

You're not limited to using lav mics with this piece of kit however – there's also a wireless handheld mic option too – but it's the former I've been playing with in my review, so it's this I'll be focusing on.

Who Is the Samson Go Mic Mobile For?

The Samson Go Mic Mobile seems tailored to folks who want the freedom to record any time, anywhere. And in carrying their phone around with them, they've already got half their “recording studio” with them at all times.

If you're someone who's prone to doing a lot of impromptu recording or interviews on the road, then this might be the ideal solution for you.

On top of that, if you compliment your shows with video you can move around a lot more whilst filming, and it boasts “up to 100′ (30m) of reliable, crystal clear” range too! 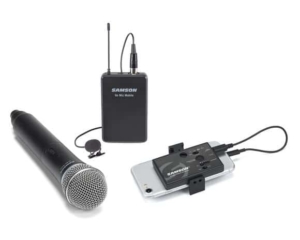 How Does it Work?

If you're working on a solo basis, there's really three additional bits of kit you'll use, on top of your smartphone itself.

There's the receiver, which attaches easily to the back of your phone using its adjustable bracket arms.

There's the beltpack transmitter which you'll attach to yourself, as well as the LM8 omnidirectional lavalier mic which plugs into it.

To add in a second person to your recording, you simply add in another transmitter and another microphone. These are both easily “paired” with the receiver, and you're ready to go.

The transmitter is powered by two AA batteries, whilst the receiver has a built-in rechargeable battery. You can charge this from your computer via its USB port.

A really nice feature here is the capability to do 2 channel recording when using dual microphones.

This can give you a lot more control over the sound and levels of your recording in post-production.

But if you don't want to record on 2 separate channels, you can easily switch to the “mix” setting which mixes both microphones into one single mono track instead.

Not much at all, to be honest!

With any wireless kit you're going to be at the mercy of other electronic signals in the area, so you do need to be mindful of that.

One slight annoyance is the way you adjust the mic gain on the transmitters. You basically need to flip open the battery compartment, unclip a small plastic screwdriver, and turn the gain dial with it.

It's a bit of a strange design to say the least, though there's no doubt been some thinking behind it. Maybe to protect the sound levels, or to give the transmitter a cleaner and simpler look overall.

I found it a little unpractical though. Certainly not a dealbreaker by any means, but worth mentioning nonetheless.

How Much Does it Cost?

You can currently pick up the Samson Go Mic Mobile along with one transmitter and lavalier mic for around $205 on Amazon and £200 on Amazon UK.

The Samson Go Mic Mobile is certainly one of the most flexible and versatile pieces of recording kits I've come across.

That said, it definitely isn't for anyone. If you're a solo podcaster with a permanent setup who mainly does monologue or Skype interview episodes, then there's no need to look into something like this.

If you're someone who's always on the go though, who records as and when they can, and wants a minimal amount of stuff to carry around with them, then it's an excellent option.

You're also not limited to smartphone recording with this kit – you can actually use it with a tablet or digital camera too, which further increases its flexibility.

Overall, it's great to see something like this on the market. It can only seek to improve the options available to podcasters when looking for the ideal recording method for themselves, their budget, and their show.

If you need some more tailored advice for your own setup, or want help with any other aspect of podcasting, then why not take a look at The Podcast Host Academy

That’s our membership site, where you’ll find access to all of our video courses, tutorials, ebooks, and downloadable resources. On top of that, we run weekly live Q&A sessions too. It'd be great to see you there.