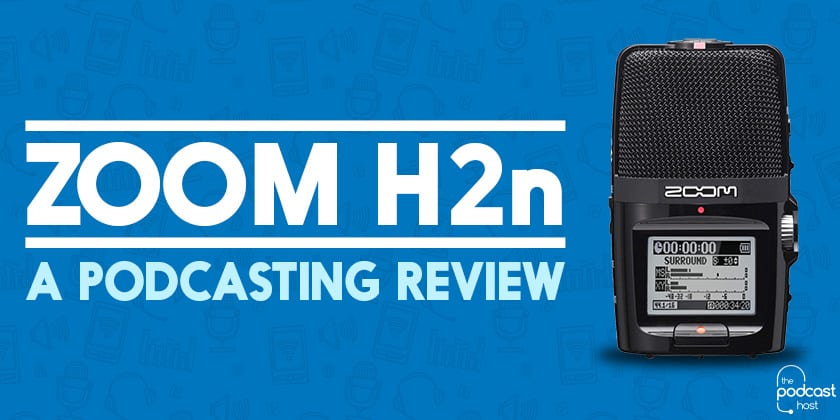 This is an equipment review (and a podcasting origin story!) by Ian Robertson from Chromaticism. If you want to review your own equipment on the site, hit the contact us link above.

A year past August I started a music review blog called ‘chromaticism’. The thing seemed to grow legs of its own, and a year later, I was offered the opportunity to augment the writing with a podcast on Primal Radio. Portentously, when I started the blog, the closest descriptor I could find on Facebook was ‘Radio Station’ – clearly it was meant to be!

A combination of the run in to Xmas, school holidays and basically not having one iota of an idea of what was involved, resulted in my procrastination, at least until the kids were back at school. I figured I would use the “leisure time” over the break to read up as much as possible before jumping in.

Fortunately, one of the very first pages I came across was that of Colin Gray and ‘The Podcast Host’. It was informative, professional, wasn’t laden with jargon and best of all was written in Scottish!

The most important piece of advice Colin had to give of course, was the one that I promptly ignored! Instead of taking it slowly, I saw a post titled ‘Do you NEED a mixer for podcasting? No, definitely not. Do you WANT a podcast mixer? Yes, almost certainly. Confused? Well, read on.’

I had been to Reverence Valada, a music festival in Portugal, last September. There I had interviewed the band Purple Heart Parade for ZANI magazine, one the guys had brought along a Zoom H1 recorder, so I already had my sights set on one of those. A little bit of research seemed to suggest that if I opted for the H2n, (wish I’d gone for the H4n now!), that would also serve as a USB microphone, which seemed perfect for my needs. My Wife added this to my Xmas list. With some other cash that found it’s way to me for Xmas, I then splashed out and bought a Behringer Xenyx 1204USB, which would be more than capable of handling my initial voice, iPod, skype interview vision – with plenty of spare capacity.

Now, in my imagination, I had this naïve notion that somewhere between John Peel and the Robin Williams character in ‘Good Morning Vietnam’, I was just going to sit down, set everything up, hit the record button and produce an hour long “live” programme! All well and good, if I could even figure out how to plug it all together! I had used the Audacity software before, I use it to transfer vinyl to iTunes for listening on the go – so at least I was half way familiar with that interface.

The settings are another matter

Search as I did, YouTube was awash with just about every configuration, except mine.
Sure, the instructions for each part of my jigsaw was fairly clear, getting them all to talk to each other was something entirely different. Well intentioned I’m sure, but the bundled software with both the Zoom H2n and the Behringer 1204USB, only complicated matters further. It probably took me a couple of hours of trial and error, watching ever more pointless YouTube videos, for a couple of weeks before I finally realised that what Colin had said day one, to start simple, and master the basics was the key.

Yes, the Behringer looks cool as f*ck, but for a simple Audacity set-up, it only complicates matters, way beyond my current abilities! I must have spent the best part of week, trying to figure out how to get the voice level anywhere near the music level, without wading waist deep into a wall of feedback and hiss.

Then I remembered that Colin had posted an introduction to recording with Audacity. I must have looked like some demented Cheshire cat watching them, as multiple light bulbs came on, for multi-tracking, how to amplify your voice, overlapping, etc., etc… I guess that in a good way, the trial and error helped the realisation of what was actually possible, for now, for what I wanted to achieve.

So, I put the Behringer back in the cupboard, I plugged the Zoom H2n directly into the iMac and recorded my introductions for the songs I had chosen, then I imported the songs direct into Audacity from iTunes.

The Zoom H2n is a breeze to setup

The instructions are logical and easy to follow, it’s worth spending the time to go through every menu – it helps familiarise yourself with the functionality and the terminology.

Simply plug in via the USB port, follow the prompts on the H2n screen, checking the sampling frequency and connect. In Audacity, you should immediately see the record levels fluctuating. In your computer’s Sound Settings – set both Input and Output Device to H2n.

If Audacity was already launched, go to Transport and click Rescan Audio Devices – you can then select the H2n as the Input and output Device in Audacity too. To avoid feeback and echo, I turned down the volume on the H2n and relied on the gain / indicated record level, as a guide for the signal strength I was generating.

Listen to the H2n

You don't need to take my word for it on quality – here's a sound sample from my Zoom H2n:

Before Everything, Plan Your Episode

My final tip is to have a rough idea / draft script for what you plan to say. I recorded everything I needed in one take with a generous pause in between, I then cut and pasted each segment to go with each track I had uploaded separately.

Annoyingly, by the time I had stitched it all together, I found myself 22 seconds short of my target of an hour! When I tried to go back and pad this out with a bit more blurb, the dynamics had changed so much that the new voice piece sounded nothing like the first. So, if anything try to record more than you need, it’s better to have the luxury of something to leave out, than nothing to add in! A couple of weeks of faffing about, was completed in just under two hours – all through following The Podcast Host’s YouTube series of videos!

The icing on the cake was that the Radio Station loved it too – my first podcast going out live with them on Sunday 31st of January. Cool as this may be, I’m not kidding myself or resting on my laurels. The podcast is a bit rough around the edges, but then so am I, but I recognise already where I can look at improving for the next one.

Whilst my original vision for my “show” may have been a bridge too far, I do plan to get there eventually – but Like Colin said, “Don’t rush in”, learn the basics, get it working for you, then you can start tinkering and experimenting…

If you want to check out the recorder, you can find it here: Zoom H2n. It's an affiliate link, but if you ahead and purchase through that, then we appreciate you supporting the website!

Oh and please do check out Ian's work on Chromaticism here.