To The Manor Borne By Robots | Fiction Podcast of the Week

“I decided a host doing intros was not that interesting, and thought it'd be fun to have a reason for the stories to be told, that there be a story within a story. So I came up with the on-going tale about a monster that has to have stories read to it.”

This week we’re talking to John Eder, creator of the fiction podcast series To The Manor Borne By Robots.

A terrible monster is destroying the Earth. The only thing that calms it is to be told stories. Each episode of To The Manor Borne By Robots features the on-going struggle to destroy the Beast, plus the stand-alone tale told to it, all of it acted by a stellar cast in lavishly produced soundscapes. TTMBBR will have 13 episodes, of which 7 are up now, with episode 8 dropping in February of 2017. TTMBBR is a complex, thought-provoking, serio-comic sci-fi tale for grown-ups.

I've always wanted to write. At age 50 I finally got serious about it, and started writing short stories and books. A best-selling author gave me the advice that I need an internet presence as an author. Around that time, I was doing readings here in Los Angeles, trying to connect with an audience.

I met a group of people who were starting a podcast network. They offered me a show – and studio time. I am a big fan of the Firesign Theater, 70s comedians who did high-concept, heavily produced albums revolving around a single story, and I decided to make something like that – so To The Manor Borne By Robots began. 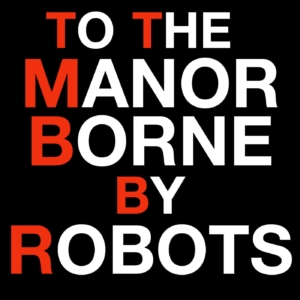 I wanted to dramatize my short stories, but felt they needed a framing device, a la Rod Serling on The Twilight Zone, or the Crypt Keeper in Tales From The Crypt.  I decided a host doing intros was not that interesting, and thought it'd be fun to have a reason for the stories to be told, that there be a story within a story. So I came up with the on-going tale about a monster that has to have stories read to it.

Podfest: Learn From a World of Podcasters!

Meet the podcasting community, and learn from the most successful shows around, at Podfest.

TTMBBR has two parts – the on-going story and the stand-alone stories. The on-going story is a satirical sci-fi tale a la Vonnegut or Adams, and I outlined it completely. Once outlined, I write it out episode by episode, revising along the way.

The stand-alone stories come from ideas I pick up in tech news, or things that people say or do. Google Glass spurred episode 7's Eye Candy. A friend with a new puppy remarked how they wished the cute little guy could stay that way forever, prompting episode 2's I'm Gonna Crawl, about a baby who never ages.

Upcoming episode 8's Marketing 4 Marketers is directly inspired by running a Kickstarter for the show, and all the marketing emails and pitches I received as a result. Other than that, the writing process is basically write, write,write and then cut, cut, cut.

Most of the show is recorded at Oogie Boogie Studios. It's in a big, industrial building in downtown L.A. filled with rehearsal spaces and sweatshops. Engineer John Owens uses 4 Sennheiser mics with pop guards in an open space. I'm there as director and sometimes actor.  There are inevitably do-overs or small roles that need filling, and I do these at my home with a Rode mic. We use Reaper to record, both in the studio and at home.

I produce the show in Reaper. I started out using Garage Band, but switched to Reaper on the fourth episode. I learnt both via online lessons. I go through the takes and put the best bits in sequence. Then I layer in sound effects. The final step is to balance levels and add compression to each segment. Then the segments are lined up to create the whole episode.

My favorite podcast of all time is the comedy genius of Superego, a  genuinely funny show, now defunct but still available on iTunes. I also really enjoyed the BBC's Tumanbey, a sort of Game Of Thrones in an ancient middle eastern land. I'm also a big fan of Joe Frank's work. Honestly, I enjoy non-fiction podcasts more than fictional ones, especially historical shows.

Unless you have deep pockets or corporate backing, it's going to be DIY, so learn Reaper or ProTools or whatever DAWS you will be using as well as you can.

Casting is key. I've been fortunate to have incredible actors commit to TTMBBR. Your success depends on their performances. Treat actors well – pay them something. I can pay only a token fee, plus a nice lunch. That's the best I can do, but people appreciate the gesture of respect for their craft, energy and time.

If you know any famous people who can act, get them! I know Judas Priest's singer Rob Halford from working with him as a photographer (see www.johneder.com). Rob's appearance in episode 6's Fronsty The Snowman resulted in an avalanche of downloads. It's by far the most downloaded episode, and introduced legions of his fans to my work. We live in a celebrity age, and if you can get one to be on your show it's a really good thing.

Be patient with people, and with yourself. Making things on a shoestring is fraught with delays and crazy-making stuff, so  have a good sense of humor about it all.

Not only do you have to make the thing, you then have to get people to listen. Become adapt at publicity. Make a decent press kit, and hit up media outlets. Get into Twitter, it is the most effective platform for promotion, and is free.  Have a nice looking website.

To The Manor Borne By Robots is available free on iTunes, Stitchr, Spreaker, & TuneIn. It is also available via web-player on its own website www.ttmbbr.com.