Since 2005 the shift in radio drama to digital and on-line has opened fantastic opportunities for writers to realise their visions at low cost. Yet, as audio drama has flourished in the US, growth in the UK has been slower; despite a longer-standing radio drama tradition.

So, what’s stopping people? At a recent event in Oxford, some of the most exciting and well-known independent audio drama producers gathered to say why prose and screen-writers should take the opportunity seriously.

Bringing the words to life

For a writer, little compares with the thrill of seeing a work brought to life. “We’d been involved in a lot of theatre and improv.” said Chris Sugden on the launch of the mind-bending new detective-comedy Victoriocity, “going into audio was just a practical decision, it kept the fun of theatre, but left you with something that is permanent and which many more people can enjoy”.

Do it now, do it big

Jack Bowman and Robert Valentine, veteran producers from the multi award-winning Wireless Theatre Company urged the audience to be ambitious. “You lose some freedom when serious money becomes involved, but starting out you can do a lot on very little.” Pointing to their much lauded Springheel Saga and War or the World reimaging, Jack noted: “We were able to stage a train chase and blow up South London for the equivalent of £120 in equipment… try doing that in film”.

Sarah Golding presenter of the Audio Drama Production Podcast and voice actor of over 60 productions highlighted the international dimension, “collaboration has never been easier” she noted, noting the very close links between US and UK productions, “it’s important to think about networks and how working together can reduce risk and increase access to skills”.

…And so are the fans

The success of shows such as We’re Alive and Welcome to Night Vale demonstrated how shows could attract international downloads in the tens of millions. Maxamillian John, a writer at Definitely Human, described how they keep constant contact with fans through a stream of fiction and non-fiction podcasts, such as MarsCorp and the Infinite Bad, as well as social media and news updates. This has enable the company to attract a global audience, with more than double the number of fans in the US than in the UK.

A chance to get new voices heard

Voice actor and producer on the 11th Hour Productions, Karim Kronfli also made a plea to hear more writing from outside the white middle-classes. He drew attention to the recent US series Bronzeville, a star-studded production that told the story of a self-sufficient black community in 1940s Chicago, as an example of a show telling stories that don’t normally get told – and in doing so attracted big audiences and a healthy profit.

Successful shows can pay the bill (if you plan for it)

Elizabeth Campbell, Production Manager at the award-winning sitcom ‘Wooden Overcoats’ talked about the money-side. ‘It’s possible to get people paid and make this sustainable,’ she said, noting the show’s success raising £10K within a week for a new season. Elizabeth stressed the importance of budgeting for creative teams and identifying income streams early. For the Wooden Overcoats this included advertising, crowd-funding and live performances; for Wireless Theatre Company it involves pay-per-listen, subscriptions and industry commissions. Whatever route people choose, Elizabeth added, ‘make sure there is a route for people to contribute.’ 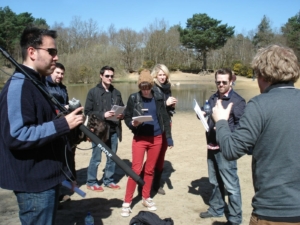 The future is unpredictable, but great content will win out

‘The only constant in the last 10 years has been everything changing’ Said Wireless’s Robert Valentine.  He noted that the industry might be emerging out of the ‘Wild West’ stage with big industry investments by Audible and a more active involvement in podcasting by BBC Radio.  Yet, despite this, he stressed that the break-out successes have always been from good, original content. This is likely to become even more important from independents wanting to remain distinctive.

Most of all, for people wanting to join in audio drama, it’s the opportunity to get involved in fast moving, collaborative and welcoming medium that most appealing. In an earlier interview, I asked Beth Eyre (a lead actor in Wooden Overcoats), about the appeal of working in indie audio productions. Replying from New York, where she was working on another production, she talked about the intimacy and creativity of the medium and ended with the observation that “all the best people are in audio drama.” Indeed, the fact that so many producers were willing to give up their time for free in Oxford, to encourage others to get involved is testament to this spirit.

‘Writing for Audio Drama and Podcasting’ was hosted by Film Oxford, on the 8th November, and was organised by Oxford Writers’ House and Coventry University.

Richard Brooks is Researcher at Coventry University focusing on innovation and entrepreneurship in the creative sectors...