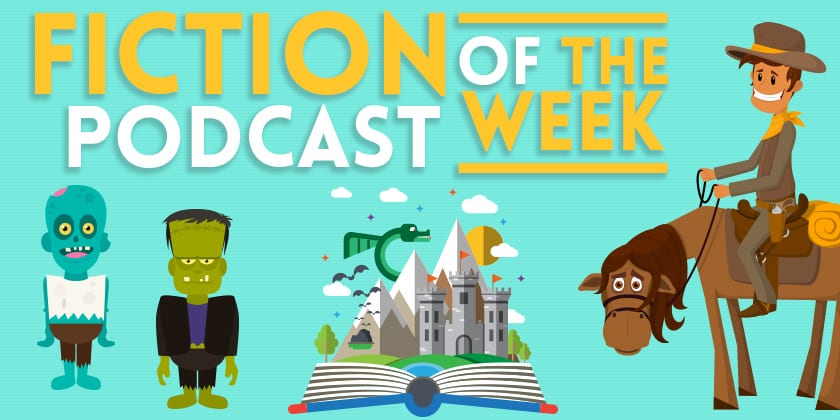 Have you ever noticed how often an audio drama is set in the realm of Science Fiction? At first, I thought was a strange thing. “Sci-fi in a medium without pictures?”

But then I remembered the beauty of audio – it lets you paint the pictures in your mind.

You Are Here takes full advantage of that very fact by painting a wonderful soundscape from the get-go. The moment you tune in to the introduction, you're treated to a rapid montage of voices describing the situation, leaving you in no doubt as to the who/what/where/why etc.

Planet Earth isn't in great shape – overpopulated and running out of resources. So, in 2147, humans begin looking further afield for salvation. Europa, to be exact, one of Jupiter's moons.

A small crew, funded by a private company, set sail for the stars in a bid to turn Europa into a habitable planet.

However, on their journey into the stars, something goes wrong – naturally – and the crew end up landing… somewhere else.

The main character, Sindel, is an engineer reliant on technology to move around, including a biosuit which enables her to walk, climb, and run. Even in harsh, alien environments.

She's accompanied by an omnipresent Artificial Intelligence in the form of a hardware chip implanted into her skull. It talks to her, and vice versa, which provides a handy dialogue device. They both take turns asking and answering questions that the audience might have.

Actually, I'm selling their relationship short. They sound more like an old, married couple than an engineer using a tool to go about her business. Their dialogue is warm, funny, and thought-provoking. (And, yes, serves to dish out story details).

In short, it's a great way of explaining the story without slapping the audience with a wet kipper called “Exposition.” The conversations feel fluid and genuine, which is a BIG tick with the green pen from me.

If you're going down the route of making a sci-fi piece, you've got to have the polish to go with it. You Are Here does well enough to tick that box, too.

I remember thinking in the 90s that ‘Star Trek; TNG' looked so cool that it couldn't possibly ever look dated, unlike “Classic Trek” (Kirk, Spock et al) which seemed embarrassingly old-fashioned. Well, time makes fools of us all, of course, and TNG is indeed starting to look like… well, a 90s series. But I still have the same thought about You Are Here. It sounds great, and I dare to speculate that it'll still sound good in 10 or 20 years time.

It has all the spacey-techy sounds you'd expect, from the movement of the ship to the voice of the A.I., and it's all realistic enough to put you in the scene. Sometimes, my mind will wander and I'll think about how they've achieved the sound design, possibly even what they could have done instead.

I'm a harsh audio reviewer with a short attention span – a bit like a restaurant critic with the dietary whims of a toddler – but I genuinely have no complaints. The production of this podcast is proficient and imaginative.

Sci-fi, in my experience is either great fun, (Star Wars, Back to the Future), or dark and depressing, (Blade Runner, Logan's Run, Soylent Green, 1984).

You Are Here isn't pessimistically dystopian. Instead, it's a bold step into the realms of “What If?”

As in, “Okay, so we've messed up Earth, but what if we stepped out of the cradle of civilisation, ready to show the universe that our species can grow up enough to survive beyond our mistakes?

For me, it's about hope.

What Makes it Different?

There's one aspect of this podcast that really sets it apart from the rest, and that's the fact that YOU THE LISTENER can influence the course of the story… and the ultimate fates of the characters!

The blurb says, “You the listener will be in the driver's seat directing the main character's actions like the choose your own adventure books of old.”

Listeners can visit the website and vote for one of several choices, i.e.

How Should Cindel Assist with the Move?

Not only that, but they've been able to monetise and incentivise this labor of love by giving Patreon donors more votes to cast, thus handing them more power in exchange for donations. I won't make any political comparisons, tempted though I may be. But it's a great and novel way of getting the audience to invest, so to speak, in the story and its characters.

There are a lot of sci-fi podcasts out there. Sadly, many fall far short, for one reason or another. I'm pleased to say that this one is a triumph.

You Are Here is a bold, courageous and innovative leap into the darkness, much like the characters themselves. You'd do well to join them.

Do you have an audio drama or fiction podcast you'd like to see reviewed? Get in touch via the box below.