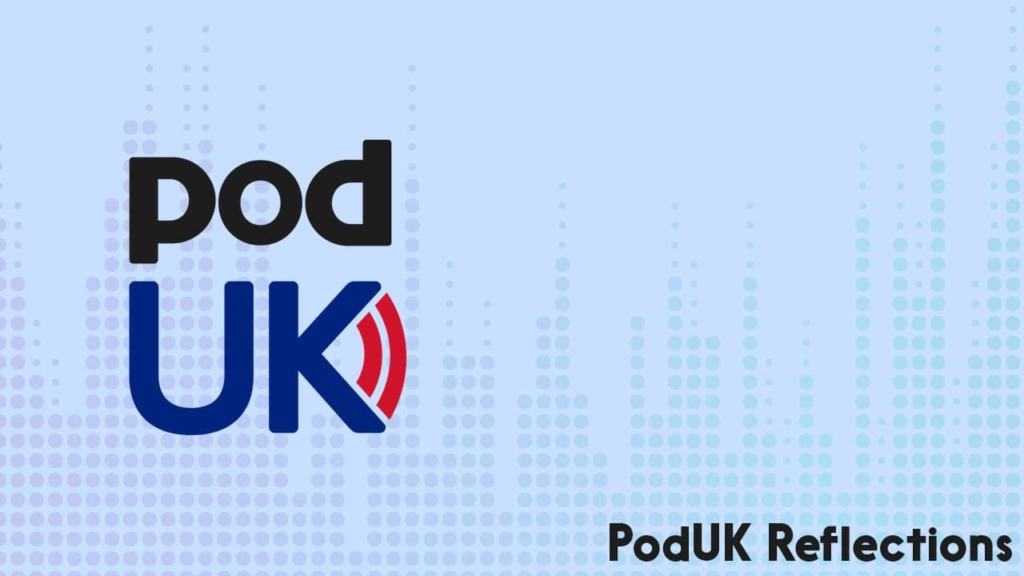 PodUK was an event aimed at listeners and creators alike, with a heavy focus on fiction podcasting and live performance, similar to that of PodCon in the US. It took place on the 2nd of February 2019 at Millennium Point in Birmingham, England

I flew down early that morning, excited to take part in my first podcasting convention.

I launched my own podcast in March 2018, so I’ve only been a part of the podcasting community for a little while. Going to my first convention felt like a big, important step in the journey. I’ve met lots of incredible podcasters in the past year and getting to see them all together and to meet more was one of the main reasons I bought a ticket.

Unfortunately I am also incredibly bad at going up to people and introducing myself; luckily PodUK had this covered. The first event of the day was a meet and greet (or Hob ‘n’ Nob) in one of the event rooms, which not only put everyone in the same position and made approaching people far easier (if you were in that room I knew you were okay with me saying hi) but also made biscuits part of the deal, which goes a long way in getting me to do anything scary.

After I had met a few new people and said hi to some I already knew, the rest of the event was so much fun. The atmosphere was one of real welcome and joy and even as a new podcaster it felt like I was meant to be there.

The convention was set up in an area just underneath the auditorium – ideal for mingling and with easy access to the merchandise stands. Like many people there I spent most of the day camped out in the auditorium itself. I ended up seeing four of the live shows and two panels.

The live shows were so much fun – they’re a very different thing to a recorded episode, and seeing the casts improvise and respond to the audience really showcased their talent and abilities. Wooden Overcoats and Victoriocity are two shows I have loved for a long time, so finally seeing them live was a fantastic treat.

How to Be an Ace Interviewer

Learn how the Pros draw out the best interview, every time.

Check out The Podcast Host Academy

I had only listened to a little of We Fix Space Junk before, and hearing them and The Orphans Podcast was a great introduction – I’m now a huge fan of both of them. The other joy of seeing a podcast live show is getting to give instant feedback – cheering and clapping for a cast that normally talks into microphones rather than to an audience only feet away.

The big topic was marketing yourself using social media. Sarah Golding (voice actress extraordinaire) and Ella Watts (prolific producer and maybe the most positive person I have ever met) both talked passionately about self-marketing and the power of networking through just asking people if you can join in.

In the Audio Drama Panel we heard from the creators of some amazing audio dramas answer questions from Ella Watts as moderator – starting with the theme of breaking down walls in their shows (there are a lot of explosions in these audio dramas!). Both panels ended with audience questions taken using a very fun throwable mic.

The overall organisation of the convention was excellent. It was easy to find everything and there were plenty of places to sit and talk and stuff to see in between events.

The merch tables were right at the entrance and I managed to snag a very beautiful Victoriocity pin and finally get a Middle:Below t-shirt (they had sold out at their live show in January!)

The staff were friendly and helpful – we always got plenty of advance warning of upcoming events and where to find them. I wish I could have stayed until the very end but I had flown down from Glasgow at 6am, so after the Wooden Overcoats show I headed off to my hotel.

Listening to so many creators talk about their work was really inspiring and I’m working now to use their advice on my own show – Glasgow Ghost Stories.

The convention was a brilliant experience and I can’t wait until the next one.

Will There Be a PodUK 2?

There's a huge appetite for PodUK to become an annual event, not only from this year's attendees, but also from folks who followed the day on social media from afar.

Director of Rocksalt Events (the organisers of PodUK) Jess Anson, said in her full PodUK Summary, that she hoped there would be a PodUK 20202…

We are all raring to go for another one already. But more on how that's all going to work later – we're going to need your help.

Also, when asked about her personal highlight from the event, she said;

It was honestly just being able to sit back and watch the event unfold rather than have to worry about things going wrong all the time.  As event manager it was really amazing, and sort of surreal, as I suspected to be all over the place the entire day.  I did end up walking the equivalent of about 10 miles across the whole day, but even so, I was still able to take time to sit down and watch a lot more of the podcasts than I had anticipated.  As a fan, I think I most enjoyed seeing Wooden Overcoats live, and also the audio drama panel was a joy to watch.  Everyone’s personalities meshed and shone through, and Ella did a great job keeping it all together.  Plus, seeing The Orphan’s and We Fix Space Junk’s first ever live shows at PodUK was so heartwarming – I’ve got to know those guys pretty well, and they deserve all the success they’re attaining!

In the meantime, if you're looking for a full list of podcasting events in 2019, then check out our handy guide. Hopefully you'll find something happening near you!

Libby Thomas is the creator of the Glasgow Ghost Stories Podcast – A haunted serial audio show from the West of Scotland.