Attention is the trickiest part of podcasting. Forget equipment, technology, software…. Grabbing attention, and keeping it, is the hardest, most important, thing we'll do.

Now, if you think that's hard in the world of grow-up podcasting, imagine talking to kids! Ever tried to hold the attention of a 5-year old? I have, every day, with my own curly haired menace. It's like juggling sand. Sand that's on fire. And invisible.

So, it takes a special approach to make a podcast for kids, and whole lot of work, and practice, to create one of the best kid's podcasts around.

That's why I want to showcase a few of my favourite podcasts for children in this article. These are the ones that I've tried and tested with my son. Each of these have managed to juggle that sand, at least for a little while, keeping him entertained.

So, if you're looking for some of the best podcasts for kids on the market, you're in the right place. Let's take a look!

What Age are they For?

My boy's five right now, going on six, but he's totally in love with kid's podcasts, even though some are aimed at older children.

We listen most often in the car. These are total genius for keeping kids entertained on big journeys. We'll alternate between podcasts and iPad when we're driving for hours, and play them through the car speakers or via kids headphones.

Otherwise, they can listen anywhere on an iPod, via their ipad or through a cheap tablet like the Kindle fire. Pair the player with a decent set of kids headphones, like those linked above, and they'll be quiet for hours!

Finally, we're listening a lot on our Amazon Echo. The smart speaker capabilities means we can listen directly to new episodes through TuneIn Radio. I just ask Alexa to play it, and it comes on, or the boy can do it himself. They can also play via Bluetooth if you'd prefer to keep your listening list up to date through your podcast app.

The Best Podcasts for Kids

Wow in the World

Wow in the World is a science education show hosted by two complete pros: Guy and Mindy. Guy Raz is one of the best podcast hosts in the game, and Mindy is a long time kids presenter, so the presenting quality is top notch. Not only that but they have an expert editing team behind them creating amazing soundscapes and dramas in the background. All of that together makes for a super-engaging, attention-holding episode, every time.

This is the show that started it off for my boy. It wasn't the first podcast for kids, but they were the first one that really took off. It's not hard to tell why it's done so well either, since it's one of the first kid's podcast I heard that I quite enjoyed myself!

This show will have you learning about how to make blue from slugs, how to find Planet X, how to make a two-headed worm, and much more. And, the best thing of all, parents will enjoy it, and no doubt learn a fair bit too!

Listen to Wow in the World

The Mysterious Disappearance of Mars Patel

This show is an audio drama based around the story of Mars Patel. He's a school student with lots of curiosity and a brilliant mind for puzzles. When kids start disappearing around the world, and crucially, his own friend Aurora vanishes, he's the one who starts to investigate.

The show makers describe it as Goonies, meets Stranger things, meets Spy Kids, and it's aimed at the 8 to 12 age range. But, my son, aged six, is totally hooked on this already. As am I, to be honest! It does have a bit of ‘mild peril' as they call it in the movies, so you might want to take a listen yourself before you fire it up for younger kids.

This is a kid's podcast with a cool concept: it's stories, written or created by children, and acted out by real actors. So, the ideas are often mental, as you'd imagine when there's an 8 year old at the helm, but they always turn out great!

Sometimes it's crazy silliness, and sometimes it's a happy ending, but either way, this makes for a great listen. 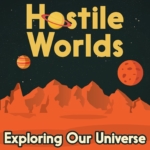 For kids who are around 12 and up, our own space exploration show, Hostile Worlds, might go down a treat. It's designed for adults, but we know how bad your attention is too…  To keep your attention (and the older kids!) we've made a drama show out of it, and there's plenty of silliness in there alongside the space facts.

You can follow along as we find out about electric snow on titan, breathing acid on Venus, or exploding in deep space.

To finish up, here are a few other kid's podcasts that we haven't fully test driven yet, but are getting great reviews. I'll update the article as we get to know them!

Interesting in Making Your Own?

And remember, if you fancy making your own kid's podcast, or maybe for adults, check out our ‘How to start a podcast‘ article. We can get you going really easily!

2 thoughts on “The Best Kid’s Podcasts: Our Top List”