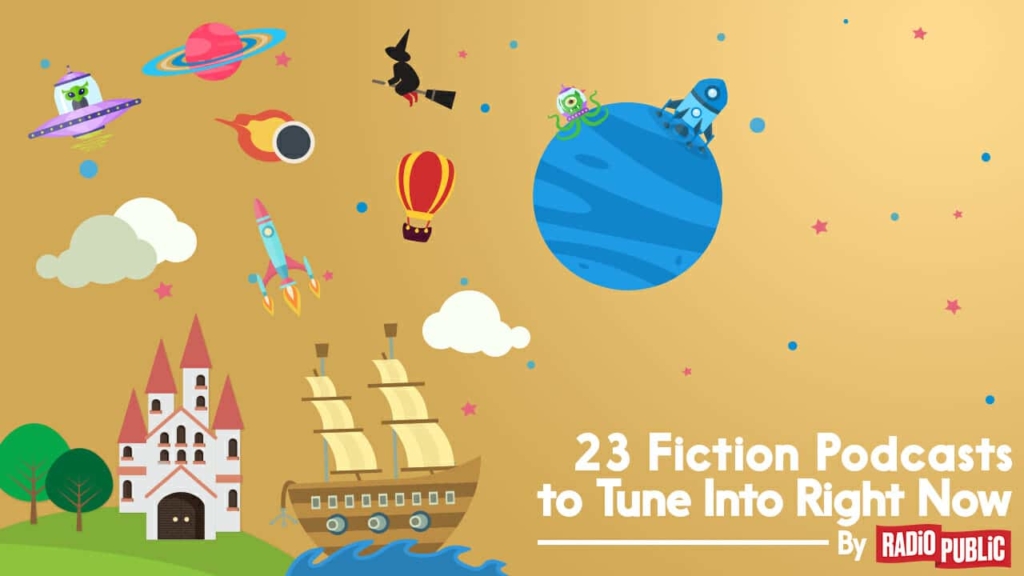 This post is sponsored by RadioPublic, an easy-to-use free podcast app that makes listening to podcasts simple – on the web, iPhone, and Android. RadioPublic’s mission is to help listeners discover, engage with, and reward podcasters, and their new Paid Listens program emphasises the reward piece of this: podcasters can make money every time their episodes are heard.

As RadioPublic specialises in podcast curation – with their dedicated team of Podcast Librarians – we thought it would be a good idea for them to run through some shows they’re currently tuning into. Today, they highlight fiction podcasts, specifically ones monetising their shows through the Paid Listens program.

Fiction podcasts that explore a past, present, or future on Earth–or beyond–immerse listeners from scene to scene. From episode to episode. A compelling audio drama shapes whole worlds, from words, develops characters through dialogue, and transports us into new stories where we let our imaginations get lost (or run wild) in a new place.

We know how much work goes into making an audio drama. Both from a talent perspective and from a technical standpoint, and we know that time and talent and tech all have a cost. Through RadioPublic’s Paid Listens program, we are enabling podcasters to continue making their podcasts through directed financial support, earned as their listeners enjoy their shows.

With the nearly two dozen shows shared here, we highlight some of the audio dramas and fiction podcasts participating in the Paid Listens program. And how some have made use of RadioPublic’s free marketing tools to earn more money.

The Amelia Project offers a very special service: Faking its clients' deaths! Its eccentric clientele includes cult leaders, politicians and celebrities, all desperate to disappear and start over… But how long can the secrecy last?

Create a Website/Blog for Your Show

The Amelia Project includes RadioPublic in their ways to listen section of their site and includes their most recent episode there, too.

Telling Fairy Tales and Folklore from cultures all over the world as audio plays.

Audio Drama Reviews includes the Available on RadioPublic button on their website, and embeds episodes of the show in individual blog posts.

Women and men playing the Uncharted Worlds RPG by Sean Gomes. Follow the misadventures of a bunch of spacefaring idiots as they try to make a living picking up random jobs and constantly repairing their space freighter.

The President's daughter is abducted through a breach in reality. Six months later, insider testimony begins to shed light on a complex web of corruption and malevolence. What would you sacrifice to make your dreams real?

Three adventurers travel the world of Kalanthus discovering truths about the world and themselves in this live play D&D story driven podcast.

Hail and Well Met includes a RadioPublic link front and center on their website and pins the most recent episode of their podcast to the top of their Twitter account.

In Her Burning: A Surreal Diary

In an isolated society, teenage Erith has been chosen for Polishing. A ritualistic surgery that erases one's irises so the individual may see the Volucris—strange and enigmatic creatures that live in an alternate realm only visible to the Polished. She discovers a new, haunting reality after her procedure that warps light into darkness and reveals hidden secrets about the world. As she progresses, she and her companion, Calyx, discover frightening truths about the Polished. And realize they are in danger of losing themselves to the changes Polishing inflicts on the mind.

Listen in as author and radio host Mike Luoma reads from his books.

Mike includes his show link in his Twitter bio, has a listening badge on the homepage of his website, and embeds his most recent episode on the podcast section of his site.

On A Dark, Cold Night

On a Dark, Cold Night is the ideal podcast for horror-lovers with insomnia. It's a creepy friend to tell you bedtime/ghost stories. The podcast involves Your Narrator telling you a spine-chilling yet soothing ghost story every week.

On A Dark, Cold Night uses their RadioPublic link on their podcast’s homepage.

Ostium is a fictional podcast about a man who discovers a secret town with many doors that lead him to strange and interesting places.

Ostium embeds the first episode of their show on the homepage of their website and individual episodes are embedded on their season pages.

When a supernatural threat drives mankind to the point of extinction, survivors around the globe struggle to endure in a world with just three rules: Do not look outside. Do not look at the sky. Do not make noise.

The Phenomenon includes their RadioPublic link in ways to listen to their show.

The Rise of King Asilas

When America faced its ultimate crisis, the second civil war, a leader emerged that unified the fractured country. However, in order to reunite all the warring states, he had to restructure the government and restore order. In doing so, the country changed from a democracy to a monarchy. Reluctantly, General Asilas Roman became America's first king. This is the story of King Asilas, an American patriot who became the center of the country's most definitive time in history and the people he trusts during his reign as America's first absolute ruler.

The Rise of King Asilas reminds listeners on their about page to listen on RadioPublic.

Serendipity City is an actual-play podcast that takes place in a sprawling, dieselpunk metropolis with a magical underworld (in more ways than one). Anarchists fight corrupt companies. shapeshifters fight for turf. dwarves work in the caves underneath the city. And through it all, our intrepid group of questionable heroes just wants to do the job they were hired for.

A post-apocalyptic audio drama. In which rampant fires have destroyed not only lives and the earth, but what little civilization was left. Rhana is on a mission to restore humanity to the world.

Dr. Miranda Quan's lab partner is MIA. But his notes, and a tape player that may contain his final words, have made it onto the research ship headed hundreds of miles into the North Pacific — along with a sinister secret that endangers everyone aboard.

The Strange Case of Starship Iris

In 2189, Earth narrowly won a war against extraterrestrials. The Strange Case of Starship Iris is about what comes after. It's a story of outer space, survival, espionage, resistance, identity, friendship, found family, romance, and secrets. (Also, there’s jokes.)

Tides is the story of Dr. Winifred Eurus, a xenobiologist trapped on an unfamiliar planet with hostile tidal forces. She must use her wits, sarcasm and intellectual curiosity to survive long enough to be rescued. But there might be more to life on this planet than she expected. . .

Tides makes use of their RadioPublic link in the footer on their website, and mention RadioPublic in their ways to listen in their press kit.

Unplaced tells the story of a woman who wakes up one day to find that no one can see or hear her. And everyone she knows is slowly forgetting about her. That would be weird enough! But after a few weeks of being invisible, she finds she's not the only being other people can't see.

Unplaced Podcast includes their RadioPublic link on their website and in their press kit.

Vest-Pocket Musicals includes a Listen with RadioPublic button in their subscription options.

A sci-fi/comedy show about a small Maryland town. Where seven friends are dragged into something far bigger than themselves.

Westside Fairytales is an anthology of horror and dark fiction stories written and read by author Tyler Bell.

Westside Fairytales includes a RadioPublic embed player as a way to listen on their website.

Between your podcast hosting provider, recording equipment, editing software, website, the startup (and ongoing) costs that add up over time can be prohibitive to the growth of your show. No matter the size of your podcast listenership or the kind of show you produce, you deserve to break even or even end up in the black at the end of each month.

Podcasts that are early in their development, speak to a particular audience. Or are too busy producing their shows   to attract advertisers seeking to reach these audiences.  They should have an opportunity to make money, too. RadioPublic’s Paid Listens program does just that: we pay you $20 for every 1000 listens to your episodes in the RadioPublic app. And we also give you a (one-time) bonus for Loyal Listeners – people who have listened to three or more of your episodes in the RadioPublic app. We run a short pre- or post-roll message that bookends your show (we don’t touch your audio file, don’t worry) to financially sustain the program.

Any show with ad-free episodes can participate. And we’ve seen interest from audio dramas, which have sustained listeners for multiple episodes over time and that aim to have multiple seasons. It can be hard to land a sponsor for season one if they don’t know what they’re buying into yet. By extension, financing a second season can make or break a show in the long run.

Ad revenue is podcasting’s fastest-growing source of revenue, but it’s not the only one. The Paid Listens program is our first foray into creating a healthy ecosystem and building a sustainable marketplace for all podcasts. Ultimately our goal is to amplify the variety of creator business models, which include crowdfunding, membership, live events, e-commerce, and more.