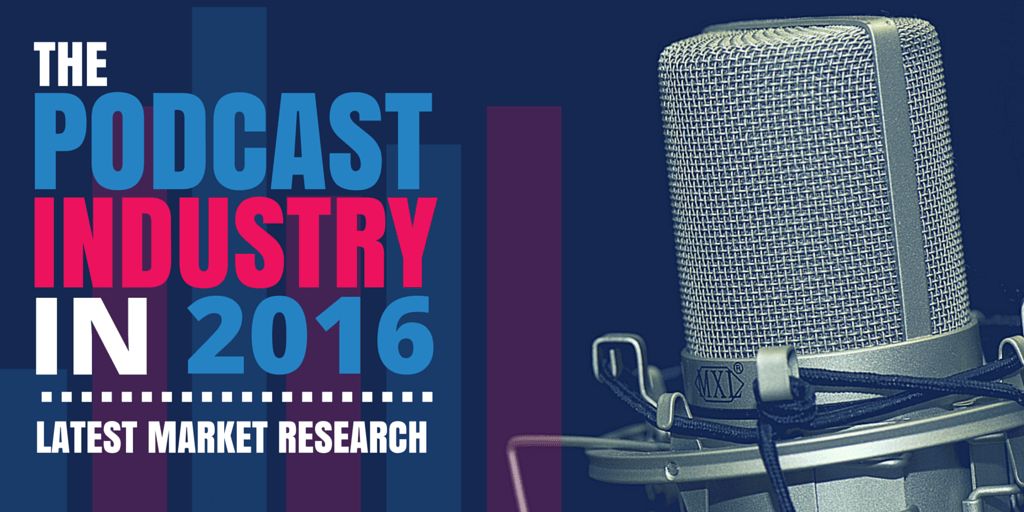 Over the past year, we've been growing the business here in all sorts of ways. As a part of that, The Podcast Host has really ‘grown up' as a company. We've transitioned from what was originally a small lifestyle business for me, into a fully fledged business, with employees, clients, balance sheets and board meetings. Even more grown up than that, we've been diving into podcast market research. And that's what I want to talk about today.

I'm sure you know, as a business grows, so does the risk. More income means more spending, and so it's suddenly a whole lot more important that I know as much as I can about the podcast industry. I'm talking about legit market and industry data that's required for us to apply for support, funding or investment.

It turns out that there's quite a lot of this data out there, specifically relating to podcasting. The problem is, it's hugely spread around, badly collated, and often buried deep within another report on the wider area of new media or radio.

So, since I've spent a few days of my life bringing all of this data together, I thought I might as well share it. After all, one of our company missions for 2016 is to grow the podcasting industry, not just our own company. That means more awareness, more listeners and more podcasting companies, all of which are easier with more funding. And funding requires data…

The data I provide below should justify more company spending on podcasting, and more investment into the industry by outside funders. That can only be a good thing for us all.

The Most Surprising Thing?

I knew this, and I know YOU knew this. But I've got to admit, I was secretly a little surprised that the data backed it up. It turns out that podcasting is all grown up and has taken its rightful place in the collective consciousness.  Seriously, that thing we're all waiting for has already happened.

Not later this year, not maybe next year.  We're living in that future already.  The evidence all adds up.  We don't ask each other any more if we know what a podcast is and soon we'll even stop asking if a new acquaintance listens to them.  We'll just assume we all do, and with good reason.

Methodology (Or How Did I Do This?)

I went about this as a secondary market research activity. That just means that I was bringing together data from other sources, already available around the web. It's a common way to do market research, because ‘primary market research' (otherwise known as actually getting off your swivel chair and asking real-life customers real-life questions) consumes a lot of time and money.

Er… Do You Know What You're Doing?

By the way, you're probably wondering whether I've got the credentials to carry this out in a legitimate way. It's a good question. Always query your sources, going into everything with a critical eye. That's what I was taught to do during my ridiculously strung-out education. I've got a BSc, an MSc and a PhD, and the latter particularly taught me how to be a professional researcher. So, I'm not claiming I'm perfect in any way, but I know how to do this stuff.

Anyway, enough of that – let's get to the numbers.

When we consider how the podcast market grows, the main driver is demand for content. Listeners create this demand, and so they're the best measure of market growth and potential. In 2016, the size of the podcasting audience continues to grow.

In 2013, the number of subscriptions held in iTunes passed 1 billion for the first time. Top shows now routinely gather over 1 million listens per month.

Serial, the most downloaded podcast in history, topped 100 million listens when it aired it’s first series. The Tim Ferriss podcast, one of the top rated business shows in the world, passed 60million downloads in early 2016.

Two major players in the podcast industry emphasize the growth we're seeing within their own stats. RawVoice reports that, within the 20,000 shows that are delivered via their hosting service, listener numbers have tripled since 2010.  Furthermore, Matt Turck from Panoply has stated that, within 2014 alone, their monthly listens tripled from 2 million to 6 million.

This trend is equally reflected in the UK, with BBC podcast downloads currently totalling 1.1 billion. Their podcast catalogue attracted 24 million listens per month in August 2014, which was up 36% on the previous year.

2. Awareness of the Medium

27% of people aged 12 to 24 listen monthly, as do 24% of people aged 25 to 54.  This accelerating penetration is evidence of the fact that podcasting is increasingly moving into the mainstream.

The trend is being propelled by the appearance of hit shows in the mainstream media – for example, the very wide coverage generated by the success of Serial.

Global non-technology brands also evidence growing popularity: Ford have sponsored a number of shows, and General Electric have produced their own show for marketing purposes.

Finally, there is increasing evidence of successful podcasting-specific companies in the market. Gimlet Media, the producer of the Startup Podcast, raised $6 million worth of funding in a recent investment round, and Midroll – a podcast sponsorship agency – were listed amongst Fast Company’s 50 most innovative companies.

Many businesses are already investing in Podcasting as a marketing method, but it competes with techniques such as blogging, video, social media and pay-per-click advertising for budget.

As the audience grows, it will become more obvious that businesses can justify allocating funds towards podcasting as a marketing activity. This is justified even further by the characteristics of the average podcast listener.

Stats show that the average podcast listener is educated (56% have an honours degree) and affluent (36% earn £50k+), and highly likely to take action due to the host/listener relationship (61% of podcast listeners have bought something they heard mentioned on a show).

Stats taken from the late 2015 period show that 88% of in-house marketers are using content marketing to promote their business, and 76% want to increase their content output in the coming year. Currently, Social media (93%), blogs (81%) and video (79%) are well used, while 23% of companies use a podcast as part of their marketing mix.

Therefore, the budget exists for businesses to invest in podcasting, assuming we can convince them that podcasting is as important as other mediums.

I hope this article has been useful to you, and that it helps to justify your investment of time and money in the industry. I also hope that it makes you as excited as I am about the future of podcasting.

The growth we're experiencing is clear, and it's only a matter of time before the medium becomes truly mainstream. When that happens, we plan to be there to see it in. As always, we'll be there to help as many people as we can to craft their own life-changing audio show.

I drew inspiration from a large number of sources during the creation of this article, but the following were the main sources of hard data: