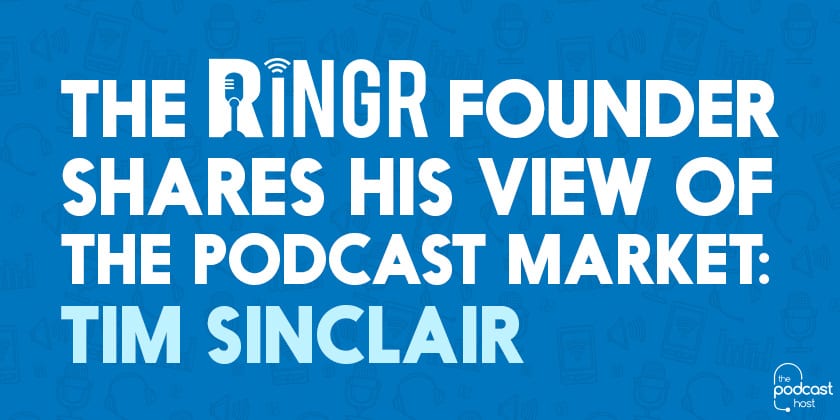 RINGR is one of a number of companies looking to bring innovative solutions to the podcasting industry, and with the recent launch of the desktop version of their product, it’s one that hopes to revolutionize the broadcasting industry as well.

As most successful products are created from a need, RINGR was born in a similar way: the need to create an easier, less expensive way to conduct remote interviews. With that as a backdrop, we sat down with Tim Sinclair, the founder of RINGR to find out where he thinks the industry is headed and what he has learned in launching a new product.

Q: What impact do you think the proliferation of software is having on the podcasting industry?

Tim Sinclair: The famous line in ‘Field of Dreams’ says, ‘If you build it, they will come.’ Unfortunately, many podcasters felt like that statement applied to their shows as well. They created (often mediocre) content and then expected thousands of people to just stumble upon it somehow.

New software, apps, and the like are now allowing podcasters to not only create better content, but host, distribute, market, track and monetize it. The overall result is a larger number of quality shows being consumed by a larger number of interested listeners…and hopefully some money is being made in the process.

Q: What does the proliferation say about the industry itself?

Tim Sinclair: It says two things: 1) The podcasting industry is full of creators, entrepreneurs, and tech-savvy dreamers who have taken it upon themselves to develop solutions to problems they are facing.

2) Podcasting is becoming a big enough industry that there is a viable market for these solutions. Without a user-base, software and app creators would be throwing tons of money to develop solutions that wouldn't ever be bought.

Q: What do you think the future holds for technologies like RINGR in the podcasting industry?

Tim Sinclair: I hope the future is very, very bright of course. In reality, I think bigger communication and technology companies will ultimately see there is value to playing in the podcasting space and make strategic acquisitions and/or begin creating tools on their own to service podcasters. The production and consumption of recorded audio and video is exploding, and I can't see the potential profit from those things being ignored by the Fortune 500s for too much longer.

Q: What are the three things you have learned about creating RINGR that have been the biggest surprise to you?

Tim Sinclair: There have been a ton of surprises, actually…but I'll try to limit it to three.

1) Creation of a product is only half the battle. Well a third, really. Once you create, you have to both sell and support your creation. All three are full-time jobs in and of themselves. It should have been obvious to me going into it, but I was so focused on developing something amazing that the other two things somewhat caught me off guard.

2) I've always been an Apple guy, so the vast number of Android devices we had to prep for was mind-boggling to me. When creating RINGR for iOS, we basically had three devices it could run on and the hardware was identical in all of them. Android has been a different animal. There are more than 7,000 different devices, each of which handles and records audio differently. Our team (which is amazing) has had to work extremely hard to ensure the app works properly on as many of them as possible.

3) People (especially in the podcasting community) are far more forgiving and helpful than I expected. We had an amazing number of beta testers who cared less about RINGR working flawlessly every time and more about helping us grow and develop. We owe a huge amount of thanks to the thousands who have offered their feedback and support over the last two years.

Tim Sinclair is Founder & CEO of RINGR. He is also the PA voice of the Fighting Illini and Chicago Fire with many years in the broadcasting industry. If you want to record high quality interviews from anywhere, on any device – walking the dog, sitting on the beach, in your home office or professional studio – now you can! Experience the highest quality audio, stereo and split-track downloads, and a wide variety of format options and bit rates…on both desktop and mobile with RINGR. Sign up for a free account now and try RINGR premium for 30 days.