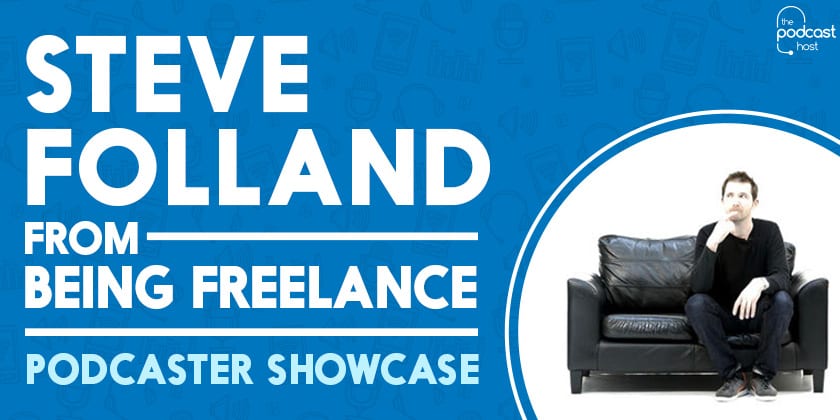 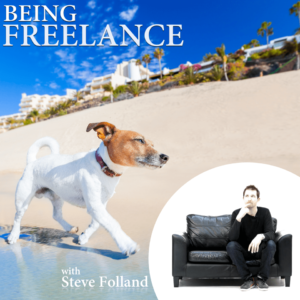 In the Podcaster Showcase, we interview a podcaster who's finding success with their show. We delve into how they started, how they've grown an audience and what they do to get a return on their efforts. The aim is to share experience and learn from anyone that's making it work!

This week, we're talking to Steve Folland from Being Freelance.

Tell us about your show

Being Freelance is the place to hear creative freelancers chat about being, well, freelance. There’s heaps to be gained in hearing the experiences of other people doing what you’re doing. It’s full of tips and ideas to help grow your business and life.

When I became self-employed I wanted to be inspired by other freelancers. I wanted to hear their experiences, learn from their successes and failures, to know that I wasn’t alone in what I was going through, to be inpsired!… But all I found podcast wise were either American ‘entrepreneur’ podcasts that didn’t really speak to me, or freelancers talking about their specific niche industries, like web development. I wanted to hear people talk about actually being freelance… I couldn’t find it, so in the end I started it myself.

I have (and love) a RODE Podcaster microphone. It’s USB, so simply plugs straight into my iMac. The RODE mic is really great quality, well worth the extra money. I chat to my guests via Skype capturing both ends of the conversation using Ecamm’s Call Recorder for Skype which splits the channels. I used to ask my guests to record their quality audio at their end and email it to me, but now I use a web app called Zencastr which is great as it records their audio in their web browser and uploads it automatically to my Dropbox. I still use my Call Recorder audio as it’s better quality and keep their Skype audio as backup. Some of my guests have decent mics (some have their own podcasts) but if they don’t, the quality from a pair of iPhone headphones is genuinely fine. If we’re being uber geeky I have Sony Professional MDR-7506 headphones which I love.

I edit using Adobe Audition. If my guest’s audio is a bit messy with a hum or buzz on it then I remove that using the ‘noise print’ noise reduction process which does an incredible job. I go through and edit the interview first and tighten it up quite a bit, removing ums, errs and repeats if there’s a lot as it makes it easier to listen to. However, I don’t want to alter my guest’s natural speech pattern or it won’t sound like them.

As I edit I take great soundbites and paste them to the start of my multi-track session. They form the opening montage you hear on the podcast. It’s kind of like a ‘coming up’ bit on a TV show. Then I find a good point half way to splice in my sponsor message. That’s recorded afterwards in a really natural way so it feels part of the conversation (I hope!) and then I mix in the music at the start and end.

I try to make time to listen through my episode in full before uploading just to make sure there are no mistakes that have crept from a rogue cut and paste to the multi-track. It happens to even the biggest podcasts where errors like that get published.

Both by following and interacting with other freelancers and by my guests sharing. It’s great when a guest really throws their support behind their episode and shares it with their network/audience. Some of my guests have significant followings, so that really makes an impact.

I write articles about freelance topics for popular freelance blogs that quote my guests and link back to their episodes.

I like to take soundbites from guests and create text videos for twitter and Instagram. It can really work well on Instagram if you get the hash tags right and the guest has a decent following. (Video is actually my freelance business, so it’s something I like to do anyway). I still haven’t got around to creating a presence on Facebook for the podcast (I know!) but we all know Facebook loves video so I’d have high hopes for it there too.

I get a huge return in expanding my own knowledge and thoughts on freelancing/running & surviving being in business. I’ve also expanded my network – each guest is a new connection and for that matter many of the more interactive listeners I count in that way too. I’ve even managed to collaborate with some of my guests. Some have hired me and I’ve hired, or recommended them.

I didn’t start the podcast to make money, but yes, as it grew I did get companies interested in sponsoring the podcast. I waited until I found one that I felt would be a genuinely good fit with my audience and who knew the value in long term brand awareness rather than measuring results on click through. I worked in commercial radio long enough to know that it’s the long term message that cuts through.

The boost it gives to my own creativity, productivity and happiness. Every single time I come off a call with a guest I feel energized. It really picks me up.

Actually, it’d come via one of my guests – the podcaster Olly Mann: ‘If you think you're only going to succeed by producing great work… that is a fantasy!’
It’s not enough just to produce a great show that you’re proud of. You can’t sit back and think an audience will find you, you’ve got to out and find them. If they don’t want to keep listening, well, you tried. But if they don’t know you exist in the first place? That’d be a real shame.

What’s been your biggest challenge?

Keeping consistent. I want to get an episode out every week. It can be all too easy to leave it one week… and then before you know it, another… and then…
An extra challenge is booking guests: you really need to plan ahead and get a lot in the diary. You can’t just rely on a guest to be there and then publish the same week. If one gets ill for example, or forgets, then suddenly you’ve no show that week.

What’s been the biggest high?

I’m always really pleased when an episode does particularly well for a guest, not just figures wise, but with the reaction on social media or emails coming in saying how inspired someone’s been. But high wise? I did the podcast live at a conference in June 2016 and that was cool to do. Instead of one guest, we had a panel of four and obviously there’s no ability to stop and edit in that situation. It was a great experience and as ever I bow to the gems my guests delivered to make it a great episode.

You can listen to Steve Folland on the Being Freelance podcast at: www.beingfreelance.com