Cables, stands, jacks, plugs, pop filters – the less glamorous, but still utterly essential part of the podcasting equipment pantheon. It’s common for podcasters to spend three figure sums on both their mic, and their recording device, then link the two together with a cable they’ll spend $5 on. On this episode, we look to

It’s common for podcasters to spend three figure sums on both their mic, and their recording device, then link the two together with a cable they’ll spend $5 on.

On this episode, we look to better understand all these different ‘Bits & Bobs’ by running through what they are, what they look like, and what they do.

They have a male end and a female end, and are used to connect microphones to equipment, or to create a link between two pieces of equipment (like a mixer to a recorder).

They’re commonly used to connect microphones and other gear to recording equipment such as mixers or preamps.

Most mixers and recorders will allow you to connect either an XLR cable or a 1/4″ jack to the same port. These are known as ‘Combo Ports’.

The 3.5mm plug/connection is most commonly found on headphones and earbuds. They’re also found on some smaller microphones too, like ‘lavalier’ clip on mics, and headsets.

Audio plugs (like the 3.5mm plug) have markings on them to determine exactly how they work.

These markings come in the form of little black bands that run around the shaft of each plug.

These bands separate each different function of the plug in question.

A plug with one band is known as a tip sleeve or TS jack. That’s because the single band separates the tip from the sleeve.

A plug with two bands is known as a tip ring sleeve, or TRS jack, because the bands have separated a ring in the middle, between the tip and the sleeve.

A plug with two bands is known as a tip ring ring sleeve, or TRRS jack, because that has two rings separated in the middle.

So what’s the purpose of all these tips and rings, and how do they work differently?

TS plugs are traditionally known as mono plugs, because the tip is feeding all the audio to the source in one dose.

TRS plugs are traditionally known as stereo plugs because the tip is now being used to feed the left channel of your audio to the source, whilst the ring is feeding the right channel.

In recent years, a third option was added to this setup – the TRRS plug.

The extra ring was brought in to accommodate a microphone or video option. The most common use of TRRS plugs is talking through a headset on your PC, or making a hands free call on your phone.

Mixers have RCA ports on them, and these enable you to connect and play media through them.

RCA cables are usually Y shaped, with the white and red stereo audio plugs at one end, and a single plug on the other end, such as a 3.5mm or 1/4″ connection. 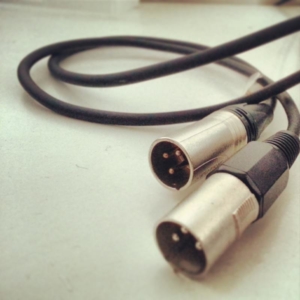 I recommend spending some good money on audio cables. I’m always surprised when people spend £100s on a really good quality microphone, a brilliant mixer and a great recorder, only to skimp on their cables. This just means you’re sending a great quality audio signal down a crappy line, and no doubt ruining it along the way. It essentially turns your £100+ equipment into budget stuff.

Here’s an example: Planet Waves cables are top quality, but they’re definitely not the cheapest in the shop. Alternatively, pop down to your local music shop and ask the guys there. They’ll be able to recommend you a good cable.

There are two types of mic stands out there: the normal, free-standing style, or the fancy boom-arm type.

Free-standing stands tend to be a lot cheaper, and super reliable. They’re solid as a rock, but they take up a lot of space and don’t move around very easily during recording.

Boom arm stands are a little more fidgety at the lower end of the pricing scale, and tend to be a lot more expensive no matter what end of the scale you’re on. They take up very little space though, because they clamp to the desk, and they’re super adjustable.

I use a Neewer Boom stand myself, although I’m the first to admit it’s not the highest quality thing in the world. It’s lasted me 6 months so far, though, and still holds up my MXL990 just fine, so I think it’s a bargain at the price! If you want to jump in at the top level, then go right to the Heil PL-2T. It’ll last you for years and can hold rock-steady with a hippo attached to the mount.

A pop filter will save you from the dreaded plosive; essentially the banging noise produced in your microphone when you blow popping ps into the diaphragm. There’s not too much to say about these, they’re simple bits of kit and little more than a pair of tights stretched over a hoop! You’ll find a pretty big range of pop filters here.

If you’re recording a show with two people in the same room, and you want both to be able to monitor their audio, then you need a headphone splitter. This is essential if you’re talking to a 3rd person via Skype or similar, otherwise one of the co-hosts wont be able to hear the person on Skype.

On the show, I mentioned two different types of headphone splitter. First was the very basic 3.5mm version. This is for a simple split between two hosts with no individual control over volume. Next, you have something a bit more sophisticated, and not much more expensive: the Behringer Microamp MA400. This little bargain lets you connect 4 sets of headphones, and offer complete volume control over each channel. Now each co-host can listen at whatever level they like.

No matter what kind of studio setup you think you’ll need, or whatever kind of podcast you’d like to do, you can get all the help, support, and advice you need inside Podcraft Academy. In there, we run regular live Q&A sessions, have courses on everything from equipment and editing to promotion and monetisation, and a load of downloadable resources, checklists, and tools designed to help you achieve your podcasting goals. It’d be great to see you in there!