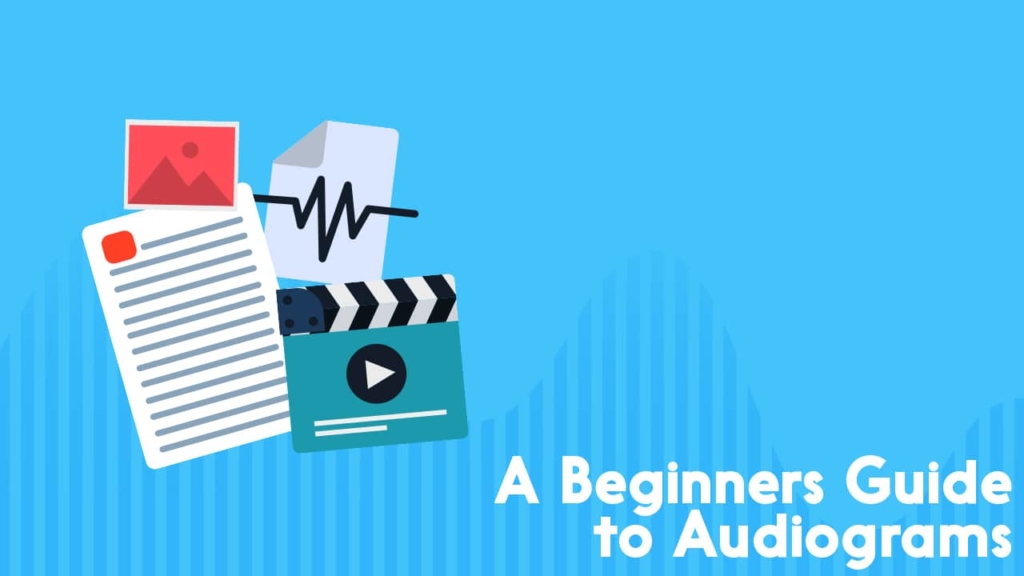 If you've used Twitter, Facebook or Instagram lately, you've seen these. If you haven't, here's a pretty good example, on Westwood One Sports' Twitter account. It's a combination of visual art, a sound wave, an audio track, and, at best, transcription of the dialogue.

More involved than a gif, less commitment than a video, these are like small flavorful tastes to tempt passers-by into committing to a whole meal.

Good news: you don't have to be a big media company to take advantage of audiograms.

The gift of open-source code

In the summer of 2016, WNYC rose from the audio ocean, like Venus on the half-shell, bearing an open source gift of code for the podcast world: the audiogram.

Now, podcasters can place content directly onto a sharing platform. The user doesn't have to make a decision, click a link, or add an app. WNYC described the impact; “On Twitter, the average engagement for an audiogram is 8x higher than a non-audiogram tweet and on Facebook some of our shows are seeing audiogram reach outperform photos and links by 58% and 83% respectively.”

But I don't know how to code!

Audiograms are (now) simple to make, embed, and share. WNYC shared its code publicly via GitHub, and continues to improve it. However, different companies have made drag-and-drop editors to help podcast creators make audiograms. Headliner partners with many media hosts, including Podcast.co and Castos.

The original idea was to provide a means that people could listen to podcasts from any platform, without having to make the decision to click on a link or add another app. Audiograms have not proven to connect listeners to entire podcast episodes effectively. People still want that companionable relationship, listening to podcasts as they cook, do chores, drive, exercise, and so on.

WNYC figured out over time that most people would listen to about 2-3 minutes of an audiogram. Again, audiograms are a great way to draw attention to your podcast. It's not a full listening commitment.

There's a growing field of web-based applications which will help you create an audiogram. Headliner, again, partners directly with media hosts. I tried Headliner, and found it so easy to use that I had made a basic audiogram in less than ten minutes.

Headliner can pull audio from any podcast. You don't have to upload a sound file. Wavve and Audiogram are other companies that make audiograms; I've not yet tried those.

All of these tools offer varied price packages, with a free option to start. Headliner and Audiogram base their prices on the number of videos you make per month. Wavve bases their pricing on the length of video footage you make.

Bear in mind that audiograms are meant to fit nicely into social media platforms. Therefore, you have to make sure that you make an audiogram that conforms to the specs of the platform you want to use. One size doesn't fit all.

The mp4 file that you make can have either a landscape, portrait, or square layout. I thought that a square layout would fit on Twitter, Facebook, and Instagram. I was wrong. The square layout will fit on Facebook and Twitter. IGTV, however, requires a tall skinny rectangle.

Essentially, when you pick your audiogram's layout, know where it's going to go. This can get irritating if you want to make separate audiograms for Instagram and Twitter, but can only make a few videos per month. File size and time length are important too.

Take the extra time for transcription! Most users scroll through social media without sound. Having your podcast text on your audiogram makes it more inviting, specific and memorable.

You should check to see what language the transcription software looks for. In the case of Headliner, they support dozens of languages, including many English dialects. As I tested Headliner, I tried it with a clip of Matthew introducing Organic Life , and a clip of the introduction of Jarnsaxa Rising. The transcription software worked perfectly with typical, logical speech, using the most obvious pronunciation. Alternate pronunciation, such as the Scandinavian pronunciation of J, was turned into different English words. Puns were met with blank space (software's equivalent of a blank stare? No sense of humor).

Again, like all aspects of podcasting, check your work. Expect that you'll want to go in and modify the transcription by hand. It's worth your time.

Pique the interest of new listeners

I used to see my day job co-workers eating lunch and scrolling through social media, watching videos on their phones. None of them were interested in podcasts. However, they would drop everything for a funny cat video in their social media feeds. I thought, if only there were some way for podcasts to engage people visually.

Making short trailer videos and posting them on Facebook or YouTube was more effect that the impact warranted. The final product didn't stand out enough. The person scrolling through social media had to choose to click to watch the video, which would open in another app. My content wasn't automatically happening on their screen. Audiograms stick up in the social media stream. They hook onto FOMO, and make people stop scrolling as they go along.

There will always be folks who prefer video over audio, and vice versa. However, this (inexpensive, efficient) coupling of audio and video might turn some viewers into listeners.

Still wondering how to make your podcast stand out? We're always working on new strategy at The Podcast Host Academy. You can learn from our courses, downloadable resources, live Q&A sessions and community forums. Making a podcast isn't difficult, but making a great podcast takes more expertise. Join us.

5 thoughts on “A Beginners’ Guide to Audiograms”