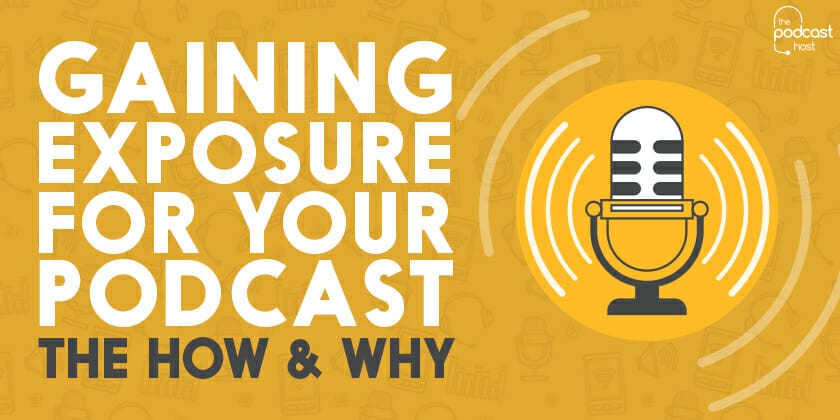 If you're taking the time to record a podcast, then presumably you're hoping that people will listen! We all hope and pray that when we load up our figures at the end of each week we'll discover we've gone viral, but that normally doesn't happen by itself. It takes a whole lot of work.

The most commonly used form of ‘gaining exposure' is asking people to check out your work. This is why Twitter is a messy place to advertise, and the Amazon author forum is an example of  how not to to advertise a book.

If people don't know you, and you're shouting “LISTEN TO MY PODCAST!” on their timelines, then they'll subconsciously respond with a swift “No way, I don't even know you!”. After that, it's normally the end of the relationship.

The Amazon link above, for example, is a forum full of authors screaming about books they've poured their heart and soul into. Nobody is accessing that forum to discover new books. They're there to shout about their own work.

Nobody reads books or listens to a podcast just because they were told to by a faceless stranger. Generally, if that's you, you're wasting your time shouting at a room full of advertising. Customers really need someone else to recommend work or have it served to them on a seemingly innocent plate.

This article is all about how to achieve that; how to market your podcast through other people. How to generate that word of mouth marketing that'll really power your success. Let's get into it.

You've made a podcast and now you need to share it. I mentioned in my previous post that there are many podcasting networks out there for you to share your work on.

In my opinion the best is iTunes, but there are hundreds out there for you to use. My biggest and best experiences have come from iTunes, but there is something to be said for hosting your show on sites like Spreaker and, of course, on your own website.

Just make sure you're submitting it to plenty of places and that you're focused on making your placement on iTunes count.

The first port of call for many podcasts on iTunes is New and Noteworthy. This podcasting Nirvana is crucial to exposure because your fledgling podcast can end up placed in the best spot on iTunes, right at the top of the list. 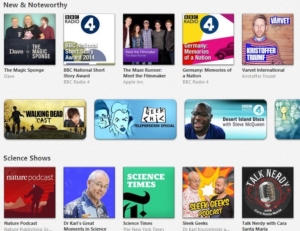 Everyone who accesses the podcast directory will see your show at the top. A small percentage of those people will decide to check you out.

I've been part of the launch process for six different shows in the past two years and all of them have featured high in New and Noteworthy.

You get 8 weeks to make it at the top. After this, you're thrown in to ‘What's Hot' with the rest of iTunes to battle it out with a few hundred thousand other shows.

The trick to topping the chart is simple. iTunes won't let anyone into the charts without 3 episodes and a good cover image.

You need listeners, naturally, but if you release with three shows and a good logo straight off the bat from day one then you'll be straight in to the charts. Anyone who sees your show or wants to support your new project will download three episodes in one go instead of just the one, and your week one figures will benefit greatly.

It's crucial not to underestimate the power of this first eight weeks. You are expected to produce consistently and often.  This is your chance to show iTunes that you're a serious podcaster who is there to take on the world.

If you're releasing on a weekly or predictable schedule then you'll dominate those podcasts who aren't as prepared for their time in the newbie charts.

Then it becomes all about retaining listeners and becoming as big as the other shows in your niche.

If you've ever listened to a show or watched a video on YouTube you'll note that the best people always finish up with a quick reminder that their listeners or viewers should really subscribe to and review their work.

Subscription numbers help with the profile of your show. They give you something to show to potential partners further down the line, and they give you a consistent guarantee of listeners.

Most people won't remember to do it though, so you have to ask them to!

The same goes for reviews. We end all of our shows with a reminder to review us, and we often say 5 star reviews would be very helpful. You're allowed to remind your listeners to do this, because otherwise how will they know it's worthwhile?

My experience with reviews is that one or two will see you leap about 50 places in the charts. We once had ten or fifteen in quick succession after an event and our show was suddenly sat among the big boys for a short while. Reviews wont last forever, but they're a great help for a week after they're received.

Note: Some people are tempted to offer benefits for reviewing, this isn't allowed. You're only allowed to remind folk to pitch in if they're willing.

You can only do so much with the audience available to you. Your work won't please everyone, but chances are the people it does please will be friends with other like minded people.

Having a website, and a forum for people to congregate in is an excellent way to grow your audience. We've had countless people sign up to our site before listening to our shows, just because their friend suggested they might like it on there. These people then get involved, and suddenly they're bringing more people on board.

If your listeners feel like they're part of a worthwhile community then they'll invite others to join in the fun. They'll begin to tell others why their podcast of choice should be listened to over podcast X or Y and they'll be the awesome people who retweet your episode links, or share your articles with their facebook friends.

Every time someone does this it builds familiarity with your name. People might not care the first five or six times their friend shares your cookery show, but when they're hosting a dinner for twenty people they'll come looking for you.

One of the best things we invested in with Mature Gamer was business cards with QR codes leading potential listeners straight to our work. 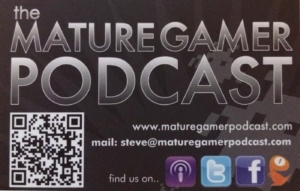 We'd go to events and hand them out to developers and members of the public alike.

These cards would have all of our contact details on, along with a quick way to get straight to the goods.

Starbucks use QR codes to advertise independent games, albums and other products in their stores. It's the simplest way for people to access your work, they just scan the image with their phone and they're away.

I said previously that telling people to listen to your show wont work. That's true. If you're clever about where you place your business cards, or when you get them out you're never telling folk to listen, you're offering them an opportunity to listen.

I've tried a lot of things when marketing my work. The only effective way to really engage people is to talk to them about themselves, the situation you're both in, their interests and projects. Once you've learned about that person, with genuine interest, you can then gauge whether there's a reason they should listen to you.

Having a reason why someone should do something is far more effective than telling them what they should do.

If you have something to say to people, why limit it to your immediate audience? You can expose your thoughts to more people by guesting on other shows. This is a great way to impress new listeners and then bring them back to your site.

We work with the philosophy that there's enough listeners for everybody. We're not trying to compete and steal other people's audiences away.

Most people have more than one or two hours a week spare for podcasts, so if they love one show in your genre, they'll often like more.

Guesting can also work the other way around though. You can bring in other podcasters, or random guests with a wide following.

Their fans will tune in to check out their favourite star and then potentially stick around for more if they like the rest of your work. We've interviewed a fair few people over the years and they've always been kind enough to reference our work on their social media accounts and websites.

It's worth talking to the guest separately from your main show or briefing them in advance if they've not had much experience with interviews. There's nothing worse than an interviewee with nothing to say, or someone with a big personality taking over your show for two hours.

A quick ten to fifteen minute slot you can drop in midway through your show is great.

I've talked in more detail recently about building networks to grow your audience, and if you have any further suggestions feel free to add them in the comments below. Do you have a special ‘trick' that worked well for you? Or an approach that helped you gain a ton of listeners? Any tried and tested anecdotes are going to be useful.

4 thoughts on “Gaining Exposure for Your Podcast: The How & Why”