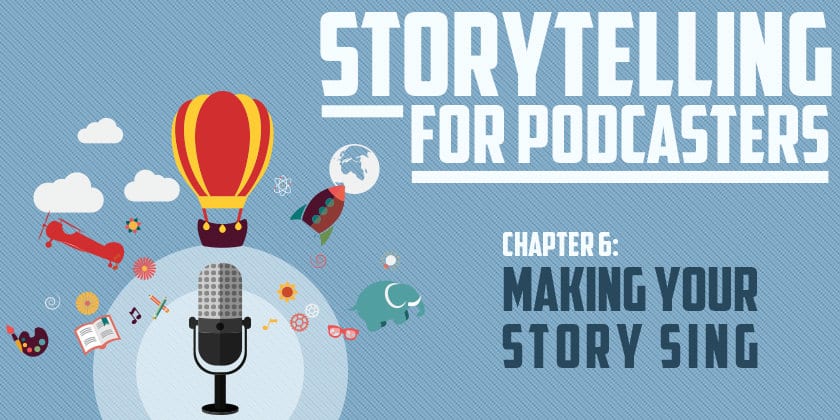 In the last episode, I introduced you to The Story Stack, the framework I’ve developed to create stories more quickly. But storytelling is a creative act. Stories should be unique. If we create them using a set formula, they will inevitably start to sound all-too familiar. And nobody wants that.

In stage one of The Story Stack, we create a first draft by following a step-by-step process. In the second, and final stage, we get creative. We take the components of our story and mix them up.

Think about the movies for a minute. Have you ever watched a film that opens with a flashback? Or a movie that throws you right into the heart of the story without any preamble.

And that’s how you can keep the storytelling for your podcasts fresh. Mix it up. Choose the right approach for the right time.

There’s a reason I called it The Story Stack. You have the ability to take the building blocks and create whatever your want from it.

So rather than leading with The Hero, you could open up with The Event – the ‘thing’ that has triggered the story. Or you could combine three elements together by opening up with your Hero meeting their Mentor – which, becomes The Event.

Let’s bring this back to the World of podcasting more specifically. You can take this approach and use it to create a quick first draft with your interviewees who have a story you’d like to share.

Use the first stage of the framework to get an understanding of the story. Then, use the second stage of The Story Stack to explore how you can tell it better. Make your interviewee aware of the process. Get them involved and create a more collaborative approach.

If it’s your own stories you’re creating for your show, then the process is much more simple. Make life easy for yourself by tackling each block of The Story Stack individually. At this stage, treat each element as a single task, you can worry about linking them together later.

Once you’ve got the ugly first draft created you can let your creativity kick in. You owe it to your listeners to create the most entertaining and memorable stories that you can. Don’t settle for the first draft. Take the time to craft something that will set you apart as a storytelling podcaster.

In some situations the eight parts of the story stack will need a reinforcements. If you read the story and it feels like something is missing, either a Prequel or a Sequel might be the answer.

If you’re story feels like it’s missing something, there’s a good chance that the context is missing. In other words, you’ve not set the scene enough. Don’t take for granted that your listeners will understand your story without some sort of context.

So is there a prequel, a backstory that you need to include? Is there something that will give your listeners a deeper connection with the story? If there is, make sure you include it.

Stories never really end. There is always a next chapter. There is always something else that happens after you’ve finished telling your tale. It’s an important thing to remember. If you’ve interviewed a guest, asking the ‘so, what’s next?’ question can give them the opportunity to share their vision.

Use The Prequel and The Sequel to bookend your Story Stack, but only if they add real value to the story.

The Story Stack is a framework. It’s not a formula. I’m not advocating you use this all the time. There are times when a full-story just doesn’t work. If it feels like you're stretching it or padding out your story, that’s a sure sign that there is no story.

Storytelling isn’t the ONLY way. I happen to believe it’s the best way, but there are times when a different communications approach will work better.

Now that you’ve seen both elements of The Story Stack I want to challenge you. I want you to create a story using the framework. Don’t be shy. Create your story. Share a link to it in the comments if you can make it public. Can't wait to read it!