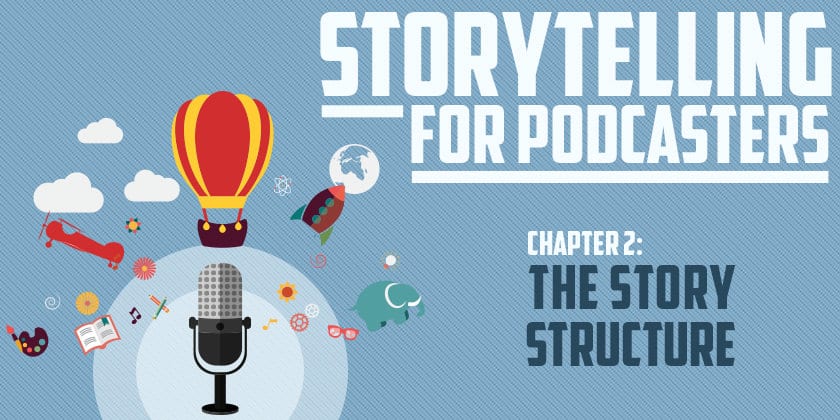 Structure in any creative endeavor feels counterintuitive. But in the world of storytelling, the simple three act structure is still the foundation for most tales. The great thing is that it comes naturally. It’s the structure that flows through the books we read, the films we watch and the TV shows we devour.

In the second episode of our Storytelling for Podcasters series, I want to talk about the basic story structure. The three acts of your story. Or, as your Primary School teacher might have said ‘the beginning, middle and end’’.

The Three Acts are the classic story construct. In workshops, I’ll get people exploring the three acts of their favourite book or film. It’s a great way to prove that it exists in pretty much every story. I use the film Rocky to share a really simple example.

Apollo Creed offers him the chance of a fight of a lifetime. Rocky, full of self doubt, trains hard.

Against all odds, Rocky beats Creed.

Now, of course there is a lot more going on than that. There are twists and turns, but that’s the essence of the story.

Let’s look at each area in turn, specifically thinking about your podcast.

The start of any story is important. It’s about setting the scene and more importantly, it’s about grabbing attention. I’d argue that for podcasters, the beginning is critical. Think about it for a moment. If you’ve invested money in a book or a cinema ticket you might forgive a weak opening. You’ll see it through. You’ve come this far, you might as well stick with it.

But, as a podcaster you don’t have that luxury. You need to hook your audience from the start. Maybe your more loyal listeners will stick around until you get to the ‘good bit’ of the story, but what about first time listeners? What if this is their first ever experience with your show?

Podcasting stories need to have the strongest openings. They need to capture attention and peak interest. I don't think I'm the only person that's ever abandoned a podcast after a couple of minutes. Don't judge me, but I'm selfish with my time!

Whether you’re telling the story as a host, or directing a story from a guest – you have to peak your listeners interest. Hook them by making them care about your hero. Make them want to find out more.

This is where the drama really happens. It’s the heart and soul of every story. It’s where you deliver on the promise from your dramatic opening. You take your listener on a journey. A journey that twists and turns in the most dramatic ways. But here’s one of my biggest tips. Make sure the story is authentic. Make it real.

That means sharing the good bits, and, more importantly, the bad bits. What mistakes were made along the way? When did you almost fail? The middle of your show and your story will fail if the story is predictable and bland. There’s a tendency to leave out the bits that show our vulnerability. The bits that show failure. But it’s the biggest mistake you can make. Leaving those real elements will kill your story.

By sharing the ups and downs, you tell people a story that your listeners can relate to. Because it’s just like the stories they live every day.

If your story is being told by a guest you’re interviewing, make sure you challenge them. Don’t let them gloss over the magic of the story. Stop them. Ask them to elaborate. Ask them how they felt. Don’t miss the chance to draw out the real story.

You’ve shared your brilliant beginning and you’ve delivered on the promise with your magical middle, but your story is still in peril. Your story could still fail. The close should be about resolution. In fiction that means bringing all the loose ends together. It means closure. It means completeness.

For non-fiction, and your podcast in particular, the end should be the exclamation point of the story. It’s the moral. It’s the lesson learned. It’s not just the outcome. I’ve listened to podcasts that have taken me on that journey, only to falter at the final hurdle. Instead of concluding the story in a positive and powerful way, the story just fizzles out.

Don’t let that happen to you. Plan your story with the end in mind. Do that and your story will endure. It will connect with your audience and it’ll be remembered.

Putting it all together | Over to you

I want you to take action with this series. The story bus doesn’t have room for passenger. So get involved. If you’re an active podcaster, have a think about your next episode. Is there a story that you want to tell? If so, take the time to figure out the beginning, middle and end. If you’re interviewing a guest, make sure you can identify the key elements of the story. If there are gaps, fill them by asking the right questions.

And, if you’re yet to start your podcasting journey, don’t think you get off lightly. I want you to listen to your favourite podcast shows and identify the story structure. And, if you find any great examples of podcasting storytelling, whether they are fiction or nonfiction, I’d love to hear from you.

Until next time, thanks for reading.

Here’s some great storytelling articles that Colin and the team have already produced.