I seem to start a lot of post-event articles with “So, I’m on the train and…” Well, there’s no change today – I am indeed – and, just as usual, I’m fizzing with ideas!

New Media Europe closed out last night and the buzz around the event is crazy. The official Facebook group is filled with images of people’s notes strewn around the room (great shot Tony Brown), and arm-long lists of goals and actions people are taking away from the event (hat-tip to Sarah Williams!).

There’s no question that this event has changed hearts and minds in a bunch of ways, and I can’t wait to see the inevitable results over the coming months.

I want to cover some of my highlights, but first, a big congratulations to Mike and Izabela Russell. You pulled off a slick, professional, inspirational couple of days – something to be hugely proud of. 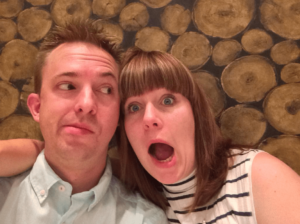 I know you’re already thinking ahead to next year, but make sure to take that holiday! Have the rest you deserve and come back even bigger and better.

The former should be taken literally, if my recent experience of holidays with kids is anything to go by. All I seem to do is go abroad and eat these days…

Anyway, to the event. What were the highlights for me?

Be Yourself & Nurture Community

Day 1 started with Mr Ravenscraft himself, and he set the scene with his natural style and ease. “Be yourself,” was his key message, and immensely well received it was too. He outlined the perils of imposter syndrome and how we often feel the call to act up, play a part, in the fear that our natural self isn't good enough. Well, it is, he said, and you’ll succeed all the more quickly if you realise that right at the start.

Cliff’s keynote obviously struck a chord; it was oft-repeated throughout the day. One theme of his revolved around building community, and this linked directly into the following session by Harmony Eichsteadt. The hype on social media around Harmony’s talk was amazing, showing just how squarely she hit the mark.

No mass marketing, Harmony said. Instead, get to know your audience, build a community, nurture relationships. Going by the number of people shouting her message from the twitter rooftops, I can see a slew of valuable communities forming on the horizon.

Next up we had Michal Szafranski and his story on becoming the most prominent blogger in Poland. Michal gave an brilliantly down to earth account of the rise of his Money Saving blog, and the subsequent leap to real media fame. I had the pleasure of speaking to him later in the weekend and he was as generous as he was motivational.

Plan your campaign, he said, finding journalists and media managers who you think would be genuinely interested in your story. Craft a message that will interest them, and tease out the transformational aspects of it. Who did you help, who will you help, and how? That’s the means by which you’ll hook coverage, he told me, and if you do a good job then many, many more will follow. Thanks again for that advice Michel, and I’m sure it’ll help everyone reading this as well.

My own talk followed a little later, and I was truly amazed and humbled by the feedback I received, both then and throughout the following 2 days. I’ve been talking about the perils of eternal treadmill podcasting (or blogging/video!) for quite a while now, but more and more people are now falling into that rut of drudgery and discontent.

The solution is to draw a line under what you’ve done so far, plan a break in your schedule and be open and honest with your fans. Use a 4 to 6 week hiatus to refresh yourself, to canvas your audience, to find out what’s working and what isn’t. Plan an upcoming season to cover a whole topic, start to finish, based on that feedback. Perhaps even change the format and the way you deliver.

Get excited about podcasting all over again, and release the season with fanfare, carrying that enthusiasm right through to the end. Then, enjoy another break and repeat the process.

The season format brings so much more purpose, more excitement, more learning and more coherence for both you and your listeners. Give it a shot and you wont regret it.

The day was closed out by an quirky and hugely motivational session with Jonathan Tilley. It more resembled a workshop than a talk, with a huge amount of audience participation. Jonathan’s relaxed, open and honest style was massively engaging and he helped us all get over our fear of failure.

Listening to the excited conversations following the session, I think Jonathan's talk alone will be responsible for the release of a host of content that’s been sitting, gathering dust on hard drives around the country. He gave many in that room the confidence needed to release their message into the world.

Day 2 began with an equally engaging American voice in the form of Phil Pallen. I met Phil in the bar the night before and discovered an instantly likeable, hugely astute guy who I hope to keep in contact with. His talk on personal branding hit the mark in so many ways, busting myths around the web.

Photography was a big theme, ensuring it actually reflects your brand. No more white backgrounds, he cried, and called us to get our personality in there, first and foremost on the page. It was an extension of the ‘be yourself’ message, delivered with humour and style.

Big mention next for Ian Anderson Gray, another excellent speaker and expert in all things social media. One of the nicest  chaps I had the pleasure to meet, Ian talked to us about social media tools. He navigated the murky waters for us, though, putting every tool in context. I couldn’t hope to repeat the slew of advice he offered, but check out his website above for a free download that'll take you through all of his recommendations.

Next up, in the unenviable pre-lunch spot, was Amy Schmittauer of SavvySexySocial. If you haven’t seen Amy’s work before, for me she holds the world title in delivering the most value in the shortest time possible. Pete Billingham introduced her as ‘the wonderful lady who delivers 5 minute videos in which she doesn’t breathe once,’ and it’s true!

Her talk did include a few breaths, jumpcuts being slightly hard to engineer in-person, but the value she gave was just as fast and furious. I’m planning to do a lot more video in the coming months and I’ll be using Amy’s YouTube formula every step of the way. Put the subject up front, she said, no-one cares about your name! Tell them what you're doing right away, and why they should care. You have 8 seconds to do it or they’re gone.

During a brief post-event chat I discovered Amy was as likeable and lovely as she is smart and driven, and I’d encourage you to learn from her YouTube channel asap.

Alongside Amy was the indomitable John Colley, delivering a tonne of learning on succeeding with online courses. John is the Udemy master, currently the author of nearly 20 courses, and with plans to put out nearly the same again in the coming year.

John's talk helped to motivate everyone into creating their own course, encouraging each and every audience member to think of themselves as experts in their own field. His plan, produce, publish, proof, promote, platforms formula gave us the steps to do so and I’m hoping to see a slew of courses hit the market from NMEUers in the coming months.

Don't be Afraid to Profit

Finishing up the show, of course, we had Chris Ducker. In Chris’ own words, value bombs were being detonated left, right and centre, and may even have been responsible for the collapse of the stage at one point. A quick display of kung-fu later, barely a flickered eyelid, and he was off again though!

Chris talked about focus, about people centred service and about remaining true to your brand. He encouraged us to be unashamed of planning to profit, of selling ourselves and our products. How are we to remain around to help our customers, after all, if we can’t make enough money to sustain our business.

Chris’ style is entertaining, motivating and outrageous in equal measure, and the audience surged from the room, charged up to change the world.

And So Much More…

Other highlights are too numerous to mention, but included very well deserved UK Podcast awards for Yap Audio (amazing work by our very own Matthew McLean) and Katherine and Julian from the Changeability Podcast. There were also great conversations and numerous beers with excellent friends like Richard Tubb, Mark Asquith, David Bain and Ben Adam-Smith, among many others. Finally a brilliant pair of MCs in the form of Pete Billingham and Craig Millar. The event was facilitated in a masterly fashion by this pair of speaking pros, introducing every speaker with insight and humour. 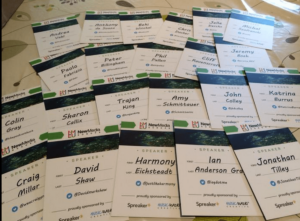 Last year at UKPOD14 I felt something change in the UK new media space. There’s no doubt that something big happened in Birmingham, and I know a lot of what I’ve achieved in the past year is thanks to connections I made at that event. This year felt just as momentous, but an order of magnitude bigger.

I have absolutely no doubt that we can look forward to the rise of a multitude of UK personalities and a torrent of amazing new content in the coming months. Blogs are about to be liberated and Podcasts will be set free. I hope you’re in on the game, and if you’re not, then just check out the work of any of the speakers above. Read, watch, learn and you’ll be inspired, motivated and energised. If you don’t just ship-it as a result, then you’ve far more willpower than I.

I’ll see you out there. It's going to be fun!