The Olympus WS-853 fits into the low-cost/budget digital recorder category. At the time of writing you can pick one up brand new on Amazon for $70 or Amazon UK for £57.

This makes it slightly cheaper than the Zoom H1 and Tascam DR-05. But can it compete with these recorders in other ways? Let's find out.

Its low-price puts it in the range of those who are maybe dipping their toe into audio/podcasting and don't want to spend a lot of money.

The benefit of using a digital recorder is that it can act as an all-in-one device.

Digital recorders are appealing options to people who don't want to be tied to one particular location, or to a computer/USB mic setup.

This is a versatile little recorder with a lot of nice features and functions. I get the impression that it's been designed for “business use” (recording meetings, seminars, etc) as opposed to podcasting itself, but there's certainly plenty overlap there.

We'll take a look at the features and functions of the recorder over the course of this review. 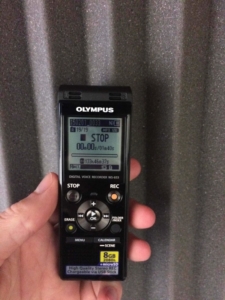 It has a display screen on the front, along with the various menu buttons.

Aside from the standard Record, Stop, and Play buttons on the front, you can also access a Calendar which will show you at a glance the dates of each recording you've done.

The built-in stereo mics are on the front/top of the recorder, whilst the speakers are on the bottom of the front face.

On the sides there's two 3.5mm jacks for headphones (out) and external mic (in), as well as a micro SD card slot (card not included), and On/Off/Hold button.

On the back there's the battery compartment (which takes two AAAs), and a little flip-down stand for setting it down on a desk to record.

On top of that there's a sliding button which pushes the retractable USB stick out of the recorder, so it can be plugged into your computer without the need for a cable.

The WS-853 comes with its own padded carry-case, but even in the case the recorder remains pocket-sized.

It also comes with two rechargeable AAA batteries, which can be charged by plugging the USB stick into your computer. 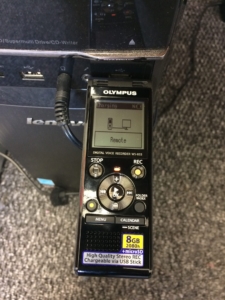 The WS-853 has a “Simple Mode” function which removes all but the bare essentials from the menu. This might be ideal for you if you're an absolute beginner when it comes to audio, and you want to keep things as clear and simple as possible.

It has 8GB of built-in memory, which is up to 2080 hours of recording time.

The WS-853 is an MP3 recorder, so you can't actually record in higher-quality WAV format.

You can record in 128kbps stereo, 64kbps mono, or 8kbps mono. If you want more information on podcast bitrates click here.

You can set your Record Level (gain) to Low, High, or Auto, depending on how loud the source of your recording is. Auto will monitor and automatically adjust this as you go, if this is something you'd just rather set and forget.

You can also apply a Low Cut Filter to your recordings to reduce the impact of low-frequencies (often caused by things like wind or handling noise).

The WS-853 has a Scene Select function designed to optimise it for each type of recording you do.

The three main scenes for on-location recording are…

Dictation – designed for a solo recording.

Meeting – designed to pick up voices from around a table.

Conference – designed to record a presentation or lecture from someone at the front of a room.

You can apply certain playback features to your audio when playing them back on the device. This won't actually “edit” or process the files themselves though. If you transfer them onto your computer they'll still be in their original form.

There's a Noise Cancel feature with two options (High and Low) to reduce the impact of ambient noise in the background of your recording.

The Voice Balancer setting can be applied so that there's more consistency in levels when playing back recordings of voices of differing volumes and distances from the recorder.

And there's the option to speed up or slow down your playback speed without actually altering the pitch of the recording.

I recorded this sample in our office, with the recorder sitting on the desk in front of me and set to ‘Dictation' mode. I've normalised the audio, but haven't applied any EQ, cleaning, etc. 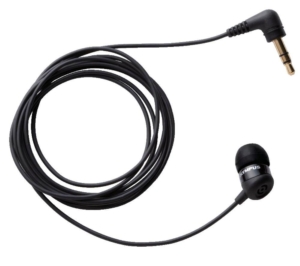 You can add additional accessories to the Olympus WS-853 to give you some extra options.

The Olympus Telephone Pickup TP8 is an attachment that plugs into the recorder's external mic port.

The TP8 is basically an earbud with a mic on it, which will pick up audio from your phone when pressed against your ear. This means you can record a phone or Skype interview from your phone.

Naturally, the quality is going to be very limited here. The audio is literally leaving the phone speaker, and being picked up again by this little mic pressed against it.

We talked about selecting ‘Scenes' earlier on, and there's a dedicated Telephone scene for recording conversations in this manner.

I haven't used the TP8, but it looks to me like the mic in your ear may be responsible for recording your voice too, and it won't separate the conversation onto separate tracks. It's a clever idea to use as a backup or in an emergency, but as I say, the quality is going to be pretty limited.

The Olympus WS-853 is a handy and versatile little recorder.

As podcasters, the main thing we'd really want to judge it on is its sound quality however, and although it doesn't sound bad, I think the Zoom H1 and Tascam DR-05 just sound a lot better.

They're in the same price range too, so it's hard to make a case for recommending the WS-853 over either of them if you're looking to buy.

But if you already have one, then it'll do a job as an entry-level recorder. You can always look to upgrade further down the line once you've gained a bit more experience!