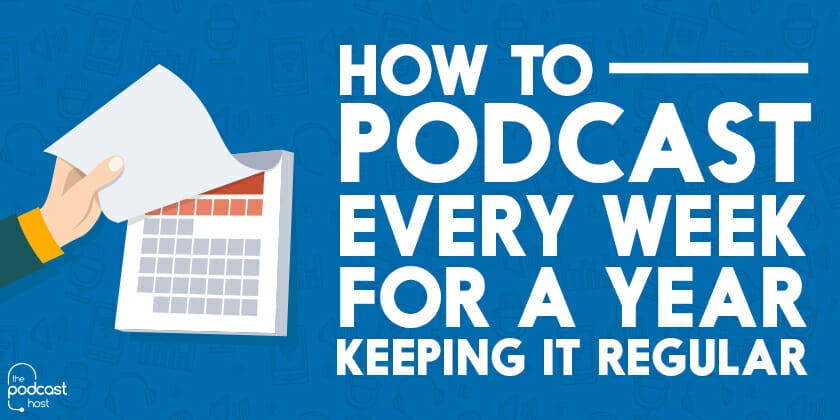 Okay, so first things first with a short disclaimer. There’s every chance you’ve arrived at this article to head straight to the comments section and tell me that:

1. Podcasting every week for a year is no big feat, and that lots of people manage it.

They do, and hats off to them, because it certainly isn’t easy

2. Simply putting something out every week for a year should never be your primary aim; good content takes priority over hitting a regular schedule.

True, I would agree with that. But I still think consistency is important, and so is setting aims and goals for your show.

From Fiction to Fact

So a bit of background info. Myself and Robert (my co-host/co-producer) have actually been putting out podcasts since late 2011, mainly in the form of Audio Dramas (we made a show called Aftermath, along with some one-off stories). We’d never really put any emphasis on doing a regular talk podcast, but after going on a bit of a podcast binge in June 2014, I approached Robert and floated the idea of doing a show about ‘the making of’ Audio Drama.

It’s worth noting at this point that we immediately had the “who are we to do this?” thoughts creeping in. We were (and actually, still are) relatively obscure unknown novices in the Audio Drama world. But we certainly felt that we had learned a lot since starting out in 2011, and there was a wealth of knowledge in the community that we could tap in to by doing interviews, and asking for pre-recorded features.

So we decided to launch the imaginatively named the Audio Drama Production Podcast (hey, it works. People can find us, and everybody knows what it’s about) in July 2014, and pledged to put out an episode every week – without fail.

I don’t remember, on hindsight, if we were drunk when we agreed to go ahead and create the show, but it certainly didn’t seem like a rational decision. In my job at that time I was leaving the house at 4.30am, I would get home at 5pm just as Robert would leave for his work (we don’t live together, by the way) and he wouldn’t be back until after 10pm.

This meant that we were in ‘seat of the pants’ mode from the off. Grabbing recording time on weekends or rare days off. I tried to do at least one Skype interview a week to build up a buffer zone so we’d always have something that could go out, even if we were stretched. Far from being a fall-back though, arranging and carrying out Skype interviews is still a big task in itself, but that’s a subject for another discussion.

Life gets in the way too. Obviously this isn’t something exclusive or unique to us. But I knew during the course of that year I was due to get married; spend two weeks in the Caribbean (poor guy, I know), and write my University dissertation. I was eternally grateful to Libsyn’s scheduling tool during these periods, but in the main, we tried to avoid recording shows weeks in advance, as we liked to keep on top of our listener correspondence and interactions.

Here’s another thing. I have a medical condition (not serious, as far as I know – but extremely inconvenient) related to gastro-reflux which means 99% of the time I’m unable to record unless I’ve ate or drank nothing for at least 2 hours beforehand. If I did, it would sound like a drain being unblocked, and it’s unlikely that anyone would want to sit and listen to that. Maybe if we'd made a plumbing podcast or Sound Effects Library. But that was another spanner in the works. We’ve had to abandon more than a few episodes because I dared to drink half a glass of water before hitting record.

On reflection, saying yes to a weekly (without fail) schedule, was also saying no to many other things. Yes, we were consistently releasing an episode each week (and I maintain that there was good and helpful content in every one – it’s just that often it probably wasn’t by us) but we had little consistency when it came to…

Comfortably the most tenacious enemy of our podcast was the lawnmower. Every time we opened up a mic, a mower would appear on the horizon. I remember early one Saturday morning we parked up at the retail park. There wasn’t another soul in sight. We were halfway through recording the show when a guy on a ride-on mower turned off the road, heading straight for us. I noticed a postage stamp sized area of grass outside the driver door, and yes, that needed to be cut (on a Saturday morning) and it took him about 20 minutes to do it.

We’d sometimes record in my garden as I live in a fairly quiet residential area. One thing I’d never considered in all my years on this earth was that streetlights sometimes get replaced. I had never witnessed a streetlight be replaced; I had never heard anyone even mention it before.

When the 6 vans pulled up to the lamppost 20 feet across the road from us, it became clear fairly quickly (as they fuelled up an impressive variety of heavy duty stone cutting equipment) that replacing a streetlight was neither a quick, nor a quiet task. We were in no way surprised about this at the time; these things just seemed to happen to us most weeks.

I remember we noted that it was our 50th episode. I wouldn’t say we made a big deal out of it, but we mentioned it. We also took the opportunity to survey the listeners (the feedback was – in the main – very good, believe it or not). By the time we hit episode 52 though putting out a weekly episode was simply a habit rather than a goal.

The podcast’s birthday passed without a whimper, though it received a nomination for – and went on to win – a UK Podcast Award, which is a bit like a birthday cake if you’re a series of mp3 files downloadable through an RSS feed. Now we're heading into the mid-60s and still plugging away.

So did we learn anything from this experience?

You mean aside from how many men it takes to replace a lamppost? I think we learned that we’d have really struggled to make all this content on our own. We are extremely fortunate to be in a niche where there is a superb community who interact with us and basically hand us content on a regular basis. There’s also so many people we still want to interview, and so many topics we’ve still not covered, so the show won’t be going away anytime soon.

I think the big takeaway here is to:

Above all, have fun. If you’re not enjoying it, you need to find a topic that you are passionate about. That’s the only way you’ll persevere when the obstacles start throwing themselves in front of you. That will happen, so be ready for it.

Need Some Advice or Mentorship for Your Own Podcast?

There's a saying that the wise person learns from the mistakes of others. If you'd like to be considered wise, and want some guidance that'll save you a lot of time, trial, and error, then check out The Podcast Host Academy.

There you'll have access to regular live Q&A sessions, a community forum, and video courses on every podcasting subject going!

2 thoughts on “How to Podcast Every Week for a Year: Keeping it Regular”