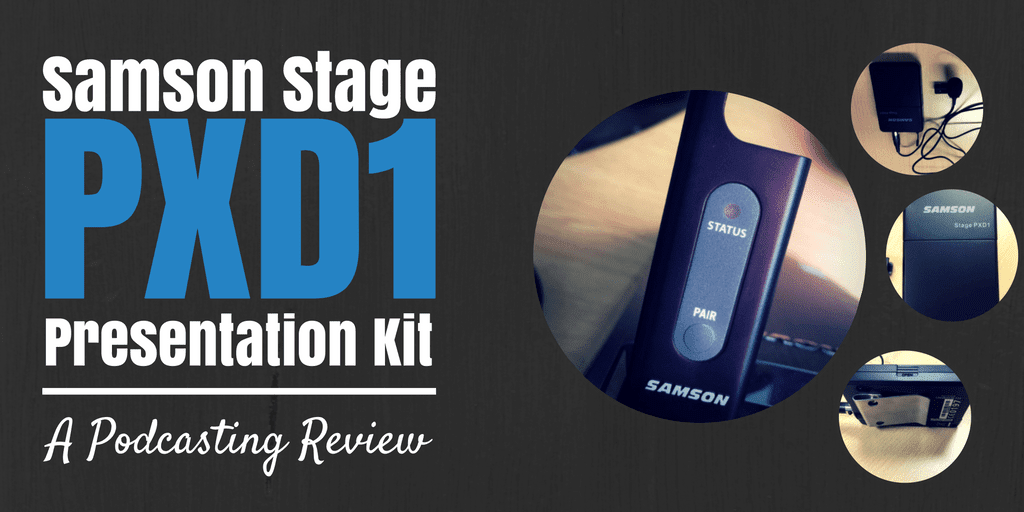 The Samson Stage PXD1 Presentation kit is made up of a lavalier mic (the Samson LM5), a beltpack transmitter, and a USB receiver.

Lavalier microphones or ‘lav mics’ (also referred to as collar, body, or lapel mics) are most commonly associated with TV and film work. They’re really small microphones which pin to the speaker’s clothing.

The benefits of lav microphones is something we talk about in our Lavalier Microphone Roundup. These benefits include the fact that they are.

In other words, lav mics are really flexible recording tools. Samson have gone the extra mile here though, and built a setup which adds the freedom of wireless recording to the equation.

Okay, the Samson LM5 lav mic does have a wire, but that wire connects to beltpack transmitter which is smaller than most smartphones.

The transmitter then clips on to your belt, or fits into one of your pockets. You're then free to walk around and record, without dragging a long cable back to your computer or mixer.

The transmitter is paired to a small USB receiver that looks a bit like a pen drive. This enables you to set the mic as an input in your editing software (Audacity, Reaper, Adobe Audition, etc) and record straight into there.

Once you're set up you have an operating range of 100 feet to walk around in. Samson do stress that this is environment dependent however, so there's a few factors to consider before you go wandering off, like…

The transmitter runs on 2 double A batteries, whilst your computer will power the USB receiver.

Inside the battery compartment there's also a little screwdriver and gain dial where you can adjust the sensitivity of the microphone.

The transmitter also has a robust metal belt clip. A P3 input port to connect the microphone. And a single button on there, which switches the device on and off.

The receiver also has one single button on it for pairing with a transmitter, as well as an LED ‘status' light.

The first time you use the Samson Stage PXD1 Presentation kit, you need to pair the transmitter to the receiver. This is a very simple process.

This means you can now go into your editing software, select the ‘Samson RXD' (the name of the receiver) as your input, and start recording.

This sound sample hasn't had any cleaning up, post-processing etc done to it, though I have normalised it. I found I got a better sound quality when recording at a very low gain (peaking at around -27dB) and bringing it up in post-production.

What Can I Use The Samson Stage PXD1 With?

Aside from running it into your PC, Mac, or iPad, you can also run the kit into a compatible PA system for live performances.

The Samson Stage PXD1 works as a mobile microphone too. You can connect the receiver to your phone with a Lightning to USB Camera Adapter or Camera Connection Kit and record directly into your voice recording app.

If you're someone who podcasts from a permanent or semi-permanent home recording setup, then you probably don't need a lav mic, let alone a wireless lav mic.

But the Samson Stage PXD1 Presentation kit is ideal for someone who does a lot of recording on the go. It's light, portable, and very flexible when it comes to recording.

Being a lav mic, it is very much a solo microphone however. Though you could record an interview with it, it would be far from ideal. That's where Samson's Stage X1U would be a better option.

This setup is ideal for someone who is delivering talks lectures, or demonstrations, and wants to record and use the content on their show. Using this kit means you are free to use your hands, and to move around freely without being attached to a cable.

If that's you, then it's certainly hard to see past the The Samson Stage PXD1 Presentation kit.