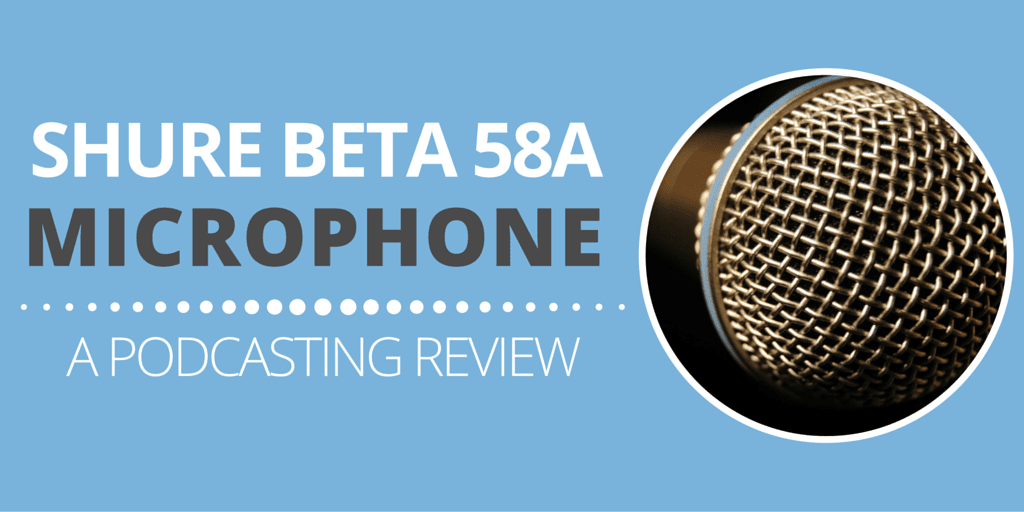 The Shure Beta 58A is a dynamic XLR mic and costs around £126/$150. The mic's little cousin, Shure's SM58, is a popular microphone amongst podcasters and musicians alike. There's a noticeable price jump between the two, so we're going to find out why – and if it's relevant to podcasting.

Who Would use the Shure Beta 58A?

The 58A is (again, like it's cousin the SM58) predominately a musician's vocal microphone. Shure have a reputation for building virtually indestructible mics and this one is no exception. It is designed to handle a lifetime of being thrown into boxes in the back of vans, kicked around studio floors, and shouted into on-stage.

Aside from maybe the on-stage shouting, this can relate to podcasting if you're someone who doesn't have a permanent recording space and spends a lot of time on the road. If you tend to conduct interviews and record your shows as and when you can at events, conferences, and other gatherings, then buying a hardy mic like this can be a shrewd move.

Where Would you use the Shure Beta 58A?

Due to it's supercardioid pickup pattern you'll get a bit more noise rejection from the sides of the mic. This is one of the differences from the SM58 which has a cardioid pattern and rejects sounds more from behind the mic. Having a directional mic which picks up sound best from the front (as these both do) can be handy if you're recording in noisier environments, so again there's a case for choosing the Shure Beta 58A if you do a lot of podcasting at events.

The Shure Beta 58A will be equally useful in any home studio though, even if it's “studio” in the loosest sense of the word. It will be even better than the Shure SM58 at rejecting surrounding room noise, such as that laptop you're recording from or the lawnmower outside.

You certainly wouldn't have to worry about it if it got knocked over, tidied away in a drawer, or packed into a box either. But then exactly the same could be said for the SM58.

Interestingly though, according to Shure, the Beta 58A is even more durable than the SM58. They claim that it has ” a hardened grille, which makes it more difficult to dent.” Have a look at just how tough the SM58 is and you'll see how impressive a claim that actually is.

What Kind of Recording Setup Suits The Shure Beta 58A

You'll need to plug this microphone into a preamp, mixer, or recorder with an XLR cable in order to use it, so this will be an extra cost if you don't have any of these bits of kit.

Whilst it's always good practice to record with your mic in a stand or boom arm, one of the other strong points of the Beta 58A is its tolerance of handling noise. Shure state that “the Beta 58A is quieter than the SM58 due to its advanced pneumatic shock mount system.”

So if you're often not in a position to mount your mic somewhere whilst recording then this might be another plus point for the 58A over the SM58.

What Does It Come With?

You'll usually get an adjustable stand adapter and a 5/8 to 3/8″ thread adapter, as well as a storage bag to keep everything together in.

How Much Does The Shure Beta 58A Cost?

Around $150 or £126 to buy new on Amazon. Bear in mind, though, that unless you have a recorder, mixer, or preamp already, this will be an additional cost if you want to use this mic.

So is it worth getting the Shure Beta 58A for your podcast? I think the bottom line here is to ask ourselves if it's necessary to pay the extra £35 or $50 (approximately) instead of getting an SM58.

I'm not entirely sure that the ‘even more durable' than the SM58 argument is relevant to anyone, unless they plan on recording in close proximity to a nuclear blast. The SM58 itself is practically invincible, so you really would have to treat your gear incredibly badly for this alone to be a justification.

I think by far the most relevant reason to buy this for podcasting is if you plan on spending a lot of recording time holding a microphone at events. The Beta 58A is built to deal with handling noise even better than the SM58, so if this is a situation you face then there's a strong case for paying the extra money. It's also better at cutting down that background noise and focussing on your voice, of course.

And if you get hit by a bus on your way home from one of these events, at least your microphone will be alright.

Interested in reading our other podcasting mic and equipment reviews? Check out our full podcast equipment guide. And please do suggest any piece of kit you'd like us to review in the future.

One thought on “Shure Beta 58A: A Podcasting Review”