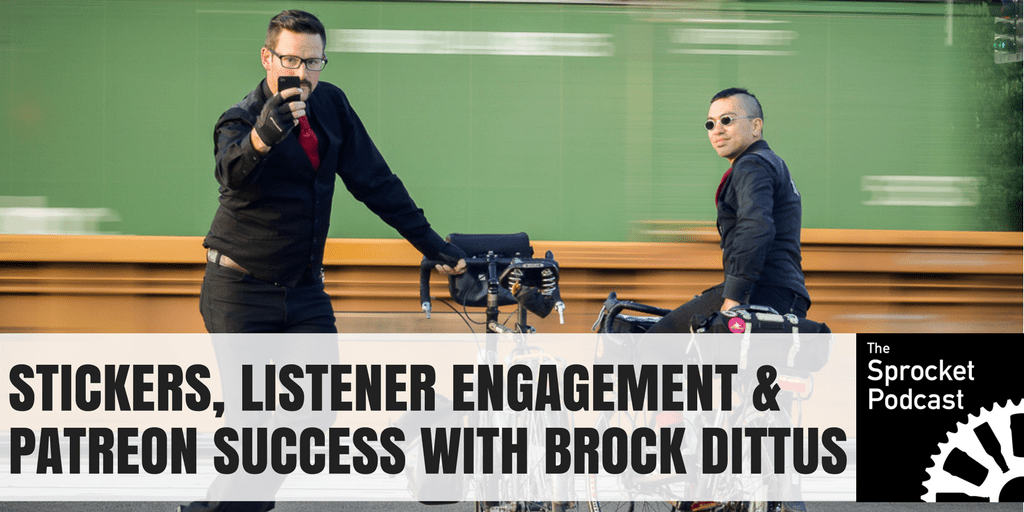 This week, we’re talking to Brock Dittus from The Sprocket Podcast.

If you're interested in bicycles, we're talking about them a lot – our content is about 90% bicycle-centric. However, while most bicycle-centric podcasts focus on performance, numbers, or gear, we see the bicycle as an icon of the simpler life we'd like to live.

Can you give up on owning a car and still have an enjoyable life? Our answer is yes. Join us for stories about adventures, tips for lifestyle adjustments, and a whole lot of rollicking fun.

My first cohost, also my housemate, noticed that I was spending a lot of time listening to podcasts and didn't have many creative outlets. He suggested that I start a podcasting project, and I invited him to join me as my cohost.

Over the next two years he helped me lay the foundation for the show that has now passed 6 years running.

When I first began the show, we were cobbling together whatever cheap electronics I had laying around from the music projects I had worked on in previous years. Eventually I borrowed some Sennheiser stage microphones from musician friends, bought a used Yamaha mixer with a guitar pick stuck inside of it, and recorded all voices live to “tape” using GarageBand on my Mac.

Most recently, we're using our own Sennheisers with a Zoom multitrack recorder to give us more control over the individual voices' volume & compression, and using a Tascam field recorder as a backup in case the first board fails.

Our show began in my basement and migrated to each next house or apartment I lived in, with equipment set up permanently in my living rooms in such a way as to have it accessible when needed and tucked away when done. For a few years we rented an office which we converted to a studio using moving blankets as sound insulation.

These days we are working with some friends on the STREAM PDX project, a 1967 Airstream travel trailer that provides audio production opportunities to the public in partnership with public television nonprofit Open Signal!

What is your usual editing process?

Once I've captured our show, which we usually record in person with our guests, I'll take the individual tracks recorded on our Zoom unit and use Audacity to individually compress and level them so that everyone is easy to hear and understand.

I eliminate any unwanted content like longer silences or artifacts in the recording, but generally we try to guide the relaxed conversation in such a way that we don't need to do too much editing for content.

Once the show has been mixed and rendered to one mono audio file, I convert it to mp3 at 96 kbps (for stereo, which works out to 48 kbps as a mono file) to keep the download speed and bandwidth use manageable.

First, we encourage our listeners to write in with their stories, fun facts, or corrections; this creates an established relationship with our audience and engenders loyalty, since everyone loves to hear their contributions in a show they enjoy – keeping our existing listeners satisfied is crucial to gaining more of them.

We've also found that featuring interesting guests who have their own following will expose our show to their fans, and vice versa, allowing both parties to gain more exposure.

Lastly, having stickers to give away is not only a nice gesture to people who already know the show, but also a simple way to make an impression on people we meet who share similar interests, or who see the stickers affixed to public objects or walls.

Of course, we aren't telling you to widely affix our stickers to objects you don't own. That would be wrong.

Interaction with our listeners is a fabulous return on the investment of time and expense! It is quite gratifying to stay in touch with interesting people doing interesting things.

The social benefits of establishing a presence in our city's bicycle culture has led to many opportunities to emcee events and meet new interviewees. And our Patreon campaign (Editor: ~$200 per month – brilliant traction there!) allows us to easily track our monthly monetary donations from listeners and plan our budget for the show.

I am often surprised when I reconnect with someone I haven't seen for years and they comment on how extroverted I have become.

I still consider myself to be an introvert when it comes to how I rest and “recharge” myself, but speaking into microphones on a weekly basis has given me experience in how to speak up, communicate clearly, and engage friends and strangers alike in interesting conversation.

I wouldn't be in such a position if I hadn't followed a friend's advice to begin podcasting.

Don't worry about statistics and metrics. While these numbers and geographic information can be helpful as you discover who you're speaking to, person-to-person contact will tell you far more about how engaged your audience is.

Ask your listeners for emails & phone calls, respond to comments on social media, and incorporate their feedback into your show. Do this until you're past the point where you take the numbers personally when they're not what you expect, and then allow yourself to be pleasantly surprised by what you find. 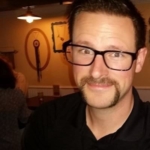 Brock Dittus hosts The Sprocket Podcast in Portland, Oregon and helps out at the nonprofit community audio studio STREAM PDX.

He also works a day job in school bus transportation where he trains new drivers, explores the Pacific Northwest with his wife on touring bicycles, and plays bass for folk rock band Lumberjack. If he has any free time, he spends it with books, vinyl records and beer.

You can listen to Brock Dittus on the The Sprocket Podcast at www.thesprocketpodcast.com. Best place to follow Brock: @brockmon & @sprocketpodcast