If so, the type of microphone you’re using will likely be what’s known as a “dynamic” mic. This term refers to how the mic is built, and how it functions.

Dynamic microphones, alongside “condenser” microphones, are the two most popular types of mic build on the market. So what’s the difference between the two?

There are hundreds of pro-level sound engineer sites that’ll break down the technical aspects of this question for you. I want to keep it really simple though.

That means I’ll make some generalisations that aren’t always the rule – now and then you’ll find exceptions.

But here’s a good starting point for differentiating between the two.

A condenser mic can be looked at as primarily something you’d use to record vocals in a professional studio environment.

A dynamic mic can be looked at as something you’d use in “live” environments, and rougher “on-the-go” settings.

Condenser microphones can often be more sensitive, and easier to break.

Their sensitivity means they tend to pick up more sounds from around your recording environment. This can be a pro or a con depending on what you’re trying to do.

Most are designed for more permanent setups on mic stands or boom arms, as opposed to being carried around, and shoved in and out of boxes or bags.

A condenser mic is powered either by having its own battery, or by using a function called Phantom Power on your mixer, preamp, or recorder.

This is why condenser mics can usually record at a much lower gain than dynamics. Gain is essentially your input recording volume. The outcome is that lower gain means less hiss in your recording.

Dynamic microphones tend to be tougher and more durable than their condenser counterparts.

If you record live, on-location, or just like having a mic on you at all times for ad-hoc recordings, then a dynamic mic is a great option.

Most dynamic mics only have a cardioid polar pattern, however. This means they’re generally designed for single person use.

If you’re using dynamics for interviews then you’d either need to get two, or to hold one in your hand and constantly point it back and forward.

Dynamic mics are powered by whatever they’re plugged into, meaning the recording signal isn’t as strong as it would be with a condenser.

This means you either need to turn the gain up more or bring the recording level up in the post-production/editing process. Either way, that’s going to raise the level of hiss in your audio.

How to Remove Audio Hiss in Recording

One of the first rules of any form of audio production is to always record the cleanest possible source material.

With that said, hiss tends to be a very constant and consistent noise under the vocals in a recording. This means it’s pretty easy to clean it up.

Inside whatever editing software you use, you’ll usually find a process called “Noise Reduction”.

This works by taking a 15-20 second sample of the hiss (on its own, with no other speech or noise), and removing this, whilst leaving everything else intact.

If you find yourself using this process often, make it a habit to leave 15-20 seconds of silence at the start of each recording you do. This is a nice easy place to take your noise sample from, prior to cleanup.

Most audio production software has Noise Reduction features built-in. You can use Audacity, which is free. Noise Reduction is pretty simple in Audacity, however, the platform, in general, can be a steep learning curve if you’re new to audio. It looks a little clunky and dated.

An alternative for those who want to save time and automate as much as possible is Alitu. Alitu is a ‘Podcast Maker’ tool that makes recording, editing, producing, and publishing your podcast as simple as possible.

Alitu will remove the hiss in your recording automatically. On top of that, it’ll level everything out to consistent and appropriate volume levels, too.

Noise Reduction can be a great tool in the podcaster’s arsenal – just remember though, it should never be used as a crutch…

How to Prevent Audio Hiss in Recording

“Prevention is better than cure”, as the saying goes, and there are additional preamps on the market that act as a go-between from your dynamic mic to your interface.

These preamps are powered in the same way you’d power a condenser mic.

This gives them the ability to take the dynamic mic’s signal and boost it, meaning you can record at a lower gain level.

For popular examples of these little bits of kit, check out the Cloudlifter CL-1, and the Triton FetHead.

Too Far Away From the Mic?

You might not need to spend more money on podcasting kit though. Perhaps you just need to hone your mic technique. Better technique in front of the mic can lessen the need to have the gain set so high, no matter what kind of gear you’re using.

It’s worth checking the cables in your setup to rule out that a dodgy connection might be the source of the hiss in your recording. If you can get access to another XLR cable, you should be able to hear if there’s a difference from one to the next. Cables are a low-cost part of your kit, so this is a potential low hanging fruit.

Here’s our full guide on choosing the best audio cables, too, if you’d like a deeper dive into that wacky world.

Is There Actually Hiss in Your Recording?

Finally, this sounds obvious, but have you checked to make sure the hiss is coming from the recording, and not via whatever you’re using to listen to it? A sub-par pair of monitors or headphones could be to blame here. If this seems likely then upgrading your monitor setup or looking into getting a Power Conditioner might be your best option. 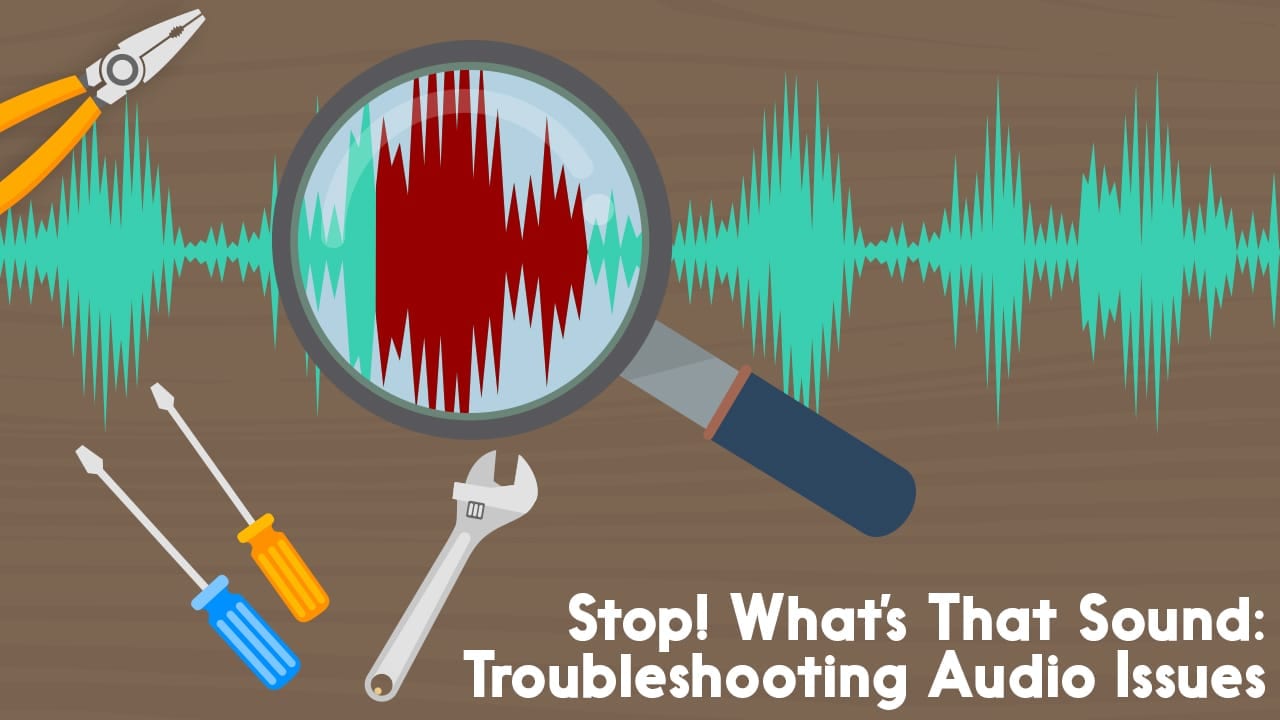 Too often, the words “fix it in post” are uttered for things best corrected early. By troubleshooting audio issues in the recording stage, you can save time and headache afterward… Find out more »

So it’s likely that there’s a hiss in your recording because you’re using a dynamic mic, as opposed to a condenser mic. Even so, this might be a worthwhile trade-off if it’s not too extreme.

A dynamic mic offers you a lot of peace of mind if you rarely ever record in the same place twice.

It can travel around with you with little fear of breaking. And being a bit less sensitive means you’ll usually get better results when recording in noisier environments.

However, if you’ve got a decent sound-dampened room or studio, free from external noise, and you do most of your recordings there, then investing in a decent condenser mic might be a better option.

Ultimately, it comes down to what works best for you. There are no right answers here.

Just remember to check things like cables, mic technique, and monitoring too. That way you can confirm or rule out that this is even a mic problem.

And remember, Alitu is a tool that can remove hiss in your recordings automatically, as well as level up and optimise your audio to broadcast standard quality. As I’ve said before, prevention is always better than cure, but using a tool like Alitu can save you a lot of time and a steep learning curve in many more ways than dealing with audio hiss. Why not try it out free for 7-days and see what you think?