I'm a long time admirer of Focusrite gear. The English audio equipment manufacturer has an outstanding global reputation for developing some of the best kit on the market.

I've been using the Focusrite Scarlett 18i8 Second Generation‘s little brother – the 2i2 – for a few years now, and I think it's a fantastic USB preamp.

A lot of podcasters ask us about recording more than 2 microphones into individual channels at the same time though. This is something you can do with the Scarlett 18i8, so I thought it was time to check it out. 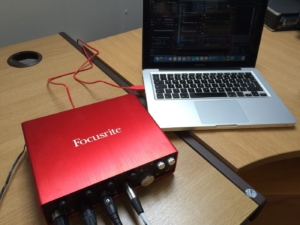 Who Would Use the Focusrite Scarlett 18i8?

Recording audio from multiple participants onto individual tracks gives you much greater control, both in the recording stage, and in the editing process.

Podcasters who run 'roundtable' style discussion with everyone gathered together in the same room would really benefit from using something like this. Alternatively, audio drama producers who want to record 3-8 voice actors in a scene together would find it ideal too.

What Software Do I Need?

With any USB preamp, you need to record into a Digital Audio Workstation (DAW) on your computer.

Firstly, you won't be able to get the best out of your Scarlett 18i8 if you record with Audacity. You can still edit and put together your show in Audacity, so don't worry if that's the software you're most familiar with, and recording audio in another DAW is fairly straightforward.

The Scarlett 18i8 comes with versions of Ableton and Pro Tools, or you can use something like Reaper or Adobe Audition.

You also need to download the Focusrite Control software (which is free) from the company's website before you can use it on your Mac or PC.

You need to plug the Scarlett 18i8 in via its mains adaptor to power it. It connects to your Mac/PC with the USB cable provided, and has an on/off switch on the back.

There's 4 XLR/1/4″ (combo) inputs on the front for plugging your microphones into. Each has its own gain dial to control the mic sensitivity.

Also on the front of the 18i8, there are some output controls. Two different headphone ports that you can plug in and monitor your recordings with. These are 1/4″ ports and have their own individual volume controls, as well as a mute button.

There's also a volume dial for monitors/speakers if you're connected to any, as well as phantom power buttons to switch on and power condenser mics if you're using them.

There's an optical ADAT input port, which gives you the option to connect another preamp (with an ADAT output port, via a TOSLINK optical cable), this can provide up to an additional 8 audio inputs for your recordings if your second preamp supports them. For 99.9% of podcasters this will never be relevant, but the option is there if you need it.

You probably won't ever use the MIDI or SPDIF inputs/outputs on the back either if you're just working with spoken word content, but again, they're there if you need them.

That does depend on your microphone, but you can be assured that it'll get the best out of whatever you plug into it.

In this sound sample I was using the MXL990. I haven't processed/treated the recording in any way. It was recorded in semi-sound dampened conditions.

The Focusrite Scarlett 18i8 Second Generation is overkill for most podcasters, because it has more inputs than most people will need.

If you run a solo show, co-hosted show, on location or Skype interview show, then I'd absolutely go with the Scarlett 2i2 instead if you're looking for a quality USB preamp.

But if you want to have 3 or more input options for on location recordings into your PC or Mac, then this is the best option I've come across so far.

The 18i8 has all the quality and characteristics we've come to expect from Focusrite over the years, and I've thoroughly enjoyed using it so far.

It is, without a doubt, the device I'll be recommending for multi-input, multi-channel USB recording from now on.