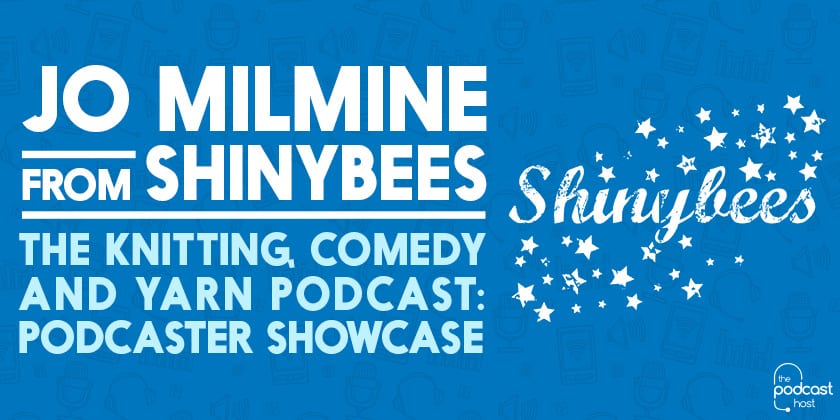 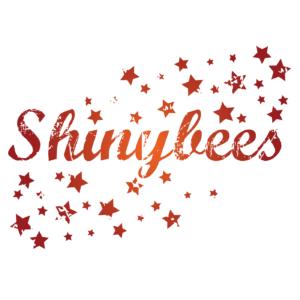 Tell us about your show

Don't believe the stereotypes: knitting is not just for nanas! Shinybees is a show of many sides, where knitted toilet roll covers, interviews with the Knitterati and dogs in hilarious knitwear get mixed together with whatever randomness I feel like throwing in. You don't even need to be a knitter to listen, but you do need a sense of humour. Delivered in northern English for the accent connoisseur. Chance of weird and wonderful knitting patterns you can make for your very own self: high.

You should listen because it's fun and accessible, even for non-knitters. If you want a break from the everyday grind on your commute, or you just want to scare off crazy train/bus/coffee shop people by snorting with laughter, you'll get that from this show.

I'd been listening to another craft podcast, iMake (sadly no longer running, but the hostess, Martine, has a new show called Creative ME), and become interested in how it all worked. I finally took the plunge about a year later in 2012 (heartily encouraged by Martine, who has since become a really good friend!) and recorded a show from my study in our house in rural Limpopo, South Africa.

Ever seen Wild At Heart? It was filmed in Limpopo, and my show was exactly like that. I had warthogs eating the grass on my lawn and a huge boomslang snake living in the garage (you can meet ‘Billy' in the first ten episodes), and I wanted to tell stories about that. It was a way of reaching out to the crafting community I had left behind in the UK and sharing all these exciting adventures.

The audio on the first few episodes was pretty low quality. I had a Samson Meteor mic that my husband had bought me from a shop in Cape Town (that took two weeks to arrive!), but we had capped internet that was provided by a wide area network. The antenna was on top of the Zoutpansberg mountains, about 40 km to the north, and beamed the internet to an aerial on the house. It was quite expensive – around £30 for 2 GB – so I uploaded the show at a low fidelity. I've never gone back and replaced them with high-quality versions, because I feel there is something romantic about the first shows. It would almost take away some of the story if I did so.

I now use a Blue Yeti, straight into a 2011-ish MacBook Pro in Garageband. It's very low tech – I put a couple of cushions behind the mic to stop echoes. I'm more about being engaging than having perfect sound. However, my show was recently named ‘Best UK Podcast of 2016' at the New Media Europe Awards, and I won a Heil PR40, so I'll be gathering all the shiny stuff to be able to use that. I can't lie – I'm most excited about being able to have a Shinybees mic collar thingy in my new setup!

My show is pretty freeform and consists of a few notes written on a piece of paper. I don't script anything – I just have regular segments that feature and then ad-lib the rest, as I'm more natural that way. That does mean I get a few ‘erms' or other filler words in there, but that's how I sound in real life. I often get comments on how listening to my show is like being at the pub with a friend –  my audience likes the informality. As a result, I don't remove all of those ‘erms', just the big annoying ones.

I use the ‘three loud mouth clicks‘ technique during recording (got that one from you Colin –  thanks!) to denote any big errors. But quite often I just stop and take them out immediately, to avoid having to shuffle bits up during editing afterwards. I use Speech Enhancer on the settings in Garageband.

I do listen back to the whole thing in passing afterwards, to make sure it is funny enough. If I laugh at my own jokes second time round, it's a good one!

Without doubt, the top way has been by collaborating with other podcasters in my niche. When I first started out, I emailed my favourite hostesses and asked for feedback on my pilot show, and a lot of them were kind enough to do that and to share it with their own audiences. This gave me a great boost in downloads from the outset. I've also organised knit-alongs with other podcasters (where lots of knitters make the same pattern, or a pattern around a theme, and share their progress on social media, particularly on Ravelry, the social media of choice in the fibre world). This allows me to access their audience, and vice versa, in a fun, community way.

Don't be afraid to work with other show hosts in your niche. They have an audience which is likely to be interested in your show too, and probably already listens to several podcasts in your niche anyway. They are not your competition: trampolining dinosaur videos on Facebook are!

Consistency is number two. Set a schedule and stick to it. The audience enjoys it and they are more likely to talk about it on social media, which attracts more listeners. Everyone loves a recommendation from a friend.

Finally, I would say engaging with and being responsive to my listeners. Chatting to them on social media, commenting on their knitting projects on Ravelry, and organising meetups at yarn shows and events so I can chat to them in person. I cuddle them a lot too. I'm a cuddler. Don't be afraid to get out from behind the mic and face to face with your listeners. Find every opportunity to do this and you'll build mega fans who'll do the marketing for you. And it's great fun! Your listeners give you their time and attention every time you publish a show and they listen to it. You can never take this for granted. Find ways you can make your listeners feel valued and important, because without them it's pretty pointless.

The returns I have got from my show have been amazing. It started as a fun project and not a way to market anything or build a massive list or influence; it was just storytelling and sharing for fun. I feel incredibly lucky to have an engaged listenership, and I've made countless new connections from producing the show. I know that one lady – Marguerite – listens to the show while driving the world's longest trains in Australia. Another, Anne, rides on horseback in a Danish forest while listening. There is no other media on the planet that would let you reach those people while they are doing these things – and have them contact you and tell you about it – except podcasting. It's exceptionally powerful.

I've started two businesses as a direct result of the podcast: a subscription yarn club, and a consultancy where I help overwhelmed small business owners with strategy, systems and project management. This draws on my previous experience as an RAF officer, project manager and defence consultant.

In terms of actual pure podcast revenue streams, I've had success with sponsorship deals. I tried Patreon for a while, with success, but I decided to leave the platform as it didn't give me the functionality I need when it comes to conversing with my most engaged fans.

My show was recently featured in The Guardian. The opportunities for promoting your personal brand with podcasting are huge.

What unexpected benefit have you got from your show?

I can go anywhere in the world, pretty much, and have someone to knit with! I even have a listener who delivers mail in Alaska, should I find myself there.

Having moved around so much over the past 12 years, I've had to constantly make new friends and leave them shortly after, which can be emotionally draining. I never expected to build friendships with so many people online as a result of the show, but I can take them anywhere, because they're in my phone.

What one piece of advice do you have for a new podcaster in your industry?

Don't be afraid to share some of yourself, your story and your personality with your listeners. It's a law of physics that, in order to have fans who really love you, you have to have the ones who really hate you. It's a balance of energy, and it's OK.

You want to be the pickled onion Monster Munch of your genre. You want people to know exactly what they're getting, even down to the stinging fingers and burning tongue, and for them to love it. You don't want to be the ready salted, or plain as we call them in the North. Plain crisps offend no one, but it's really hard to get excited about them.

You can listen to Jo Milmine on the Shinybees: The Knitting, Comedy And Yarn Podcast at www.shinybees.com.