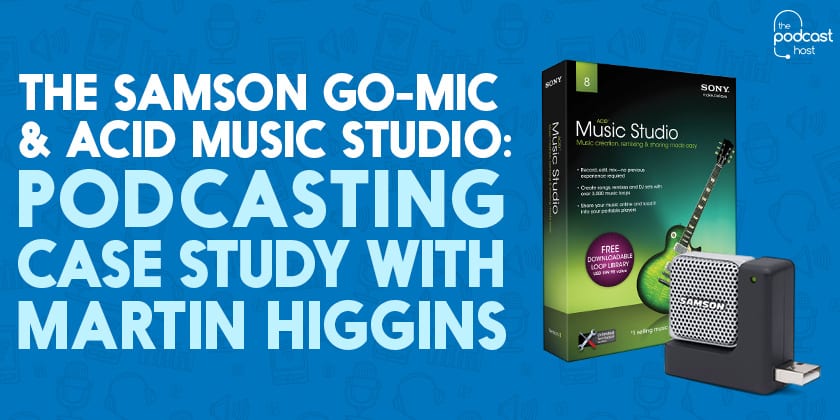 This article was contributed by Martin Higgins of The Eternities Podcast. It's another podcasting case study, looking at the real methods used by one Podcaster in their work. This doesn't claim to be the only way to do things, but gives another example of how things are done well. Enjoy!

The set-up I’ve used for the two years that my podcast has been running is cheap, simple and as portable as a laptop. But with a few editing tricks, the finished podcast has always sounded perfectly listenable and professional.

My Podcast – The Eternities

A few years ago I wrote a novel, Human+, on themes of human development, consciousness and technology. I launched my podcast on similar themes two years ago, partly as an effort to promote myself as a writer, but also because I find these themes important and deeply fascinating in their own right.

I personally find podcasts centred around interviews and free-ranging conversation the most interesting, as opposed to one person speaking a monologue. Consequently, all of my podcasts, barring a handful of roundtables, feature interviews with writers and thinkers with something to say on these themes. Such people are far easier to contact in the age of the internet, and Skyping with them about these issues is both a pleasure and a privilege. Previous podcasts have featured the scientist Dean Radin, sci-fi author and futurist Ramez Naam, and the consciousness theorist Anthony Peake. 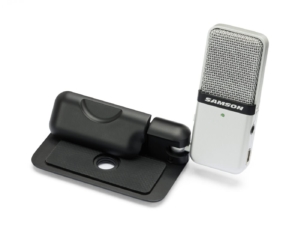 When I began podcasting, as I was new to it I didn’t want to invest too much in a microphone in case I found it wasn’t for me (something I always recommend! – Colin). But I knew I wanted to sound as good as possible from the start and after a little research settled on the Samson Go Mic.

This microphone is a little gem. Pound for pound, in both weight and price, it’s one of the best around (around £30 / $40). It comes in its own neat carry case and the whole thing fits in the palm of the hand, yet this includes both the microphone and its attached clamp. This clamp can both affix the microphone to a laptop and double also as its own stand, so you can position the microphone where you want on any flat surface.

Even though it’s extremely compact, the Go Mic boasts studio quality audio with a frequency response of 20Hz–18kHz and a 16-bit resolution of 44.1kHz. It comes with a metre long mini-usb cable and has plug-and-play functionality for both PC and Mac. Surprisingly, once again for its price, the Go Mic offers a direct monitoring feature via an integrated socket for earphones, so you can listen to your recording in real time and optimise recording levels.

The mic has three recording settings. The one I use for podcasts is uni-directional where only the front of the microphone receives audio. The omni-directional mode records in a 360-degree sound pattern, which I’ve employed when recording “roundtable” group discussion podcasts and face-to-face interviews. The final setting is the -10 decibel mode, which again only records from one side, but this time also with a much reduced sensitivity. This setting is useful for voice-over work as it vastly reduces ambient noise. For this setting, though, you must speak at a very close distance, as the microphone picks up only a narrow sound cone.

The main software I use for recording and editing my podcasts is Sony Acid Music Studio. When I conduct interviews for the podcast and record my introductions for each episode, I record directly into Acid Music Studio. I opted for this software as I initially had problems with the more popular – and free – Audacity. Older versions of Acid Music Studio can be picked up relatively cheaply on Amazon (£10 / $13) and the software does much more than simply edit podcasts. Equally, though, I assume that Audacity will be much improved since I first tried it many years ago.

When interviewing, I record a second channel of audio from my interviewee – via Skype, if they are not in the same room – using High Criteria’s Total Recorder software. Total Recorder can record each side of an internet telephone conversation as a separate channel, though I prefer to spread the load over the two pieces of software, if only due to painful past experience from unstable, crash-prone computer set-ups. It’s probably high time that I re-assessed these methods, but I’m used to this arrangement and it’s worked well for me so far.

I will then add a third track in Acid Music for my recorded introduction for that particular podcast, and a fourth track for the podcast’s music, which can be easily manipulated in Acid Music, adding fades in and out, and adjusting audio levels and position. Once I’m happy with the whole arrangement, I use Acid Music to render an mp3 with a 64 kb bitrate.

Looking to Start Your Own Show?

Then check out our step by step guide to planning and launching a podcast. It’ll walk you through the entire process as well as give you links to other helpful resources, tools, and services!