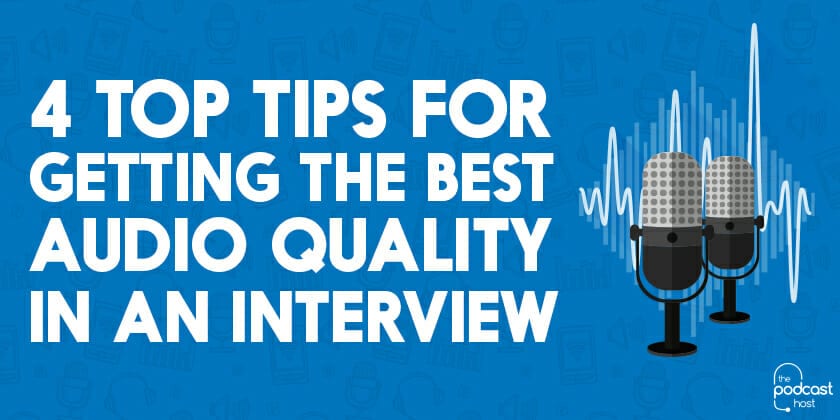 I've recently been working with a business owner on launching their new Podcast, and everything's going well. We have 3 episodes in the can and more in production.

As part of this launch and growth process, I always give a lot of feedback on improving recording quality from episode to episode. Most recently I was talking to this podcaster about improving the quality of her Skype calls, and I thought it was worth sharing on the site.

This is nothing about equipment and all about preparation and technique. There's no point in having a great podcasting microphone if you don't use it right, or plan ahead to make sure your environment is prepared.

So, here are the top 4 things to think about:

Try to be aware of where the microphone is. In this client's interviews she sounded a little thin, and there's a fair bit of echo. This generally happens because you, the presenter, are too far away from the microphone.

If you're using a lapel mic, then make sure it's high enough up your shirt – preferably around 6 to 9 inches below your mouth. If it's a handheld or a mounted microphone, then keep it around 6 inches in front of your mouth, and try to keep it really consistent. That's something that comes with practice, of course, but if you keep it in mind, the technique will come.

2. Be Aware of Your Movements

In these interviews, and in many many others, I often hear a bangs, scrapes, thuds and paper noises. It's really easily done, don't worry, but it's worth trying to cut down. It's a symptom of the fact that microphones tend to be a lot more sensitive, and a lot less selective than our ears.

So, if you're rocking in your chair, you probably wont notice the squeak at the time – your ears just tune it out when it's happening live. Similarly, your hands thumping on the desk, or paper rustling as you move your notes around, these seem quiet in-person, but the microphone really amplifies them.

When you're recording, try to keep as still as you can at all times. Don't move your hands too much, and risk banging the desk. Don't move paper notes around: lay them out on the table in advance instead. Try to imagine that you're hiding from someone and you need to stay as quiet as possible, or you'll be discovered.

For some people this is really difficult – they can't help waving hands around when speaking. If that's you, then don't worry, I do it too. But you'll have to learn how to do it without making contact with anything!

In a similar way to the last point, background noises are really emphasised on an audio recording too, particularly with some types of microphones. This is a simple one to solve though: turn it off or get away from it.

Make sure you have as few noise making things nearby as humanly possible. Get away from fridges, open windows, front rooms right next to the road, air conditioning, etc.

Make sure you turn off noise making devices like telephones, mobiles, computers or unpredictable dogs! If you're recording on your computer, then we can't do much about that, but you can try to make sure it's under a table if it's a desktop, or you're as far from it as possible if it's a laptop.

This is tricky, because you don't have a lot of control over the person on the other end of the line. But, you do have a little…

Ensure They're Using a Decent Microphone

In advance of the call, make sure to ask them about how they plan to record. Ask what type of microphone they have, first off. If they say they'll be speaking into their laptop's internal mic, then you really need to think about whether it's worthwhile going ahead: the quality is likely to be really low.

If that's the case, some interviewers actually go to the effort of sending out a decent headset mic to interviewees. If it helps to create great interviews then it's worth the £10 to £20 a time, and can go towards making great contacts since you've given the interviewee a nice little gift.

Coach them on Background Noises

Next, tell them how you've found that Skype really emphasises noises in the background, or noises that come from banging the table and the like. Describe the personal movement problems that we covered above, and justify it by telling them that you want them to come across as well as possible so that it'll win them new clients/listeners/fans, etc. By putting the onus on how it'll benefit them to think about it, you don't sound like you're nagging, and it'll really motivate them to keep it in mind.

I've found with just 1 or 2 minutes of coaching at the start of a call, it can make a huge difference to the sound quality you get from an inexperienced interviewee.

We have a Skype recording guide you can send to your interviewees prior to recording. It walks them through the setup in an easy to understand manner which will go a long way towards helping you get optimal audio quality in your interviews.

It's available, along with all our other downloads, checklists, ebooks, video courses, and live Q&A sessions, inside The Podcast Host Academy!