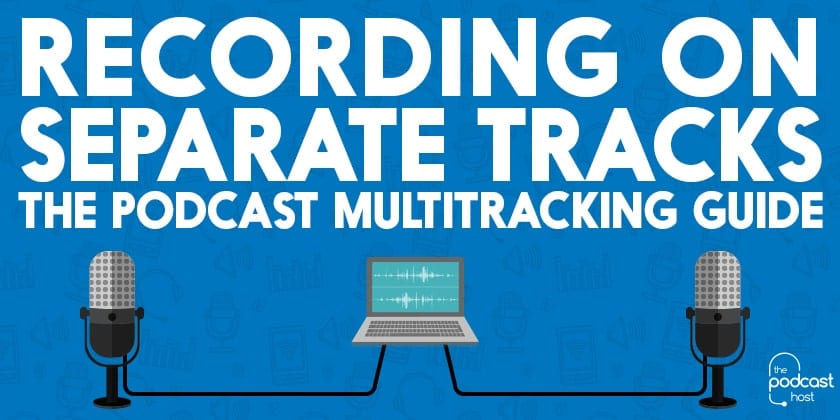 Recording two speakers is bread and butter for podcasters, whether it's a show with two regular co-hosts, or an interview on Skype. Today we're not looking at the equipment used to record these, though. Instead, we're looking at how you make the recording. That comes down to the oft-asked question: should I record my speakers on separate tracks?

What is Multi-track Recording?

This is delving into the realm of multitracking. But, what does multitracking mean? Really, it just means you're recording more than one track.

The thing is, a normal stereo track might have two ‘tracks' – left and right – but often it's not really multi-track in the way we're covering here. Instead, it'll sport exactly the same audio on both the left and the right channel, as shown here. 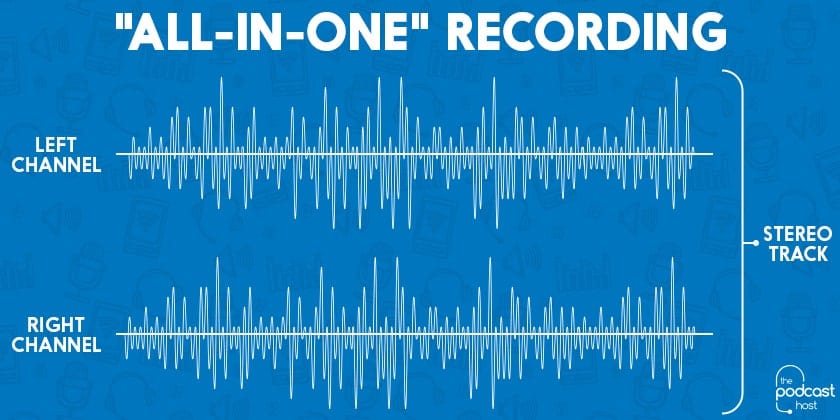 That's what I would call all-in-one recording – everything goes onto both tracks. It can sometimes be called joint-stereo.

Multi-track recording, on the other hand, is when you record each person's audio independently, splitting the speakers onto separate channels. That means one person on the left and one on the right.

Now, I know they're channels, not tracks – audio engineers the world over are shouting at me right now – but in our world, this is a common method of delivering a multi-track recording, or a split recording. You can see how this looks here: 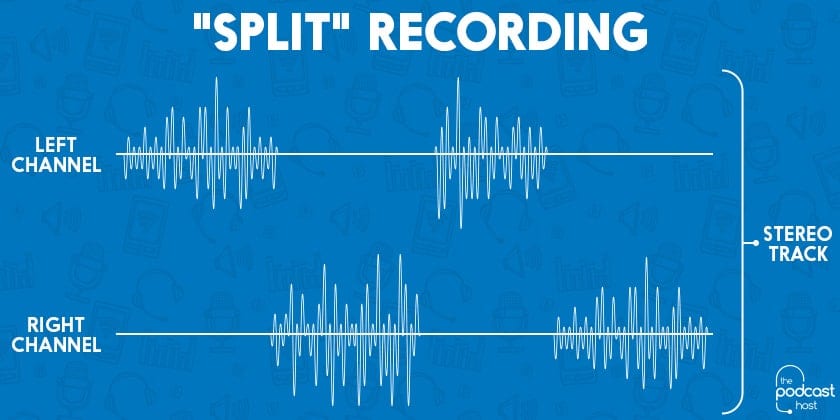 You can create this kind of recording in many Skype call recorders, such as eCamm, or with the right equipment, as we'll cover below.

Either way, you end up with a split stereo track, as we've shown above. Then, in our editor, we split the stereo track into two mono tracks. Hey presto: mulitple tracks! You can see how this looks below. 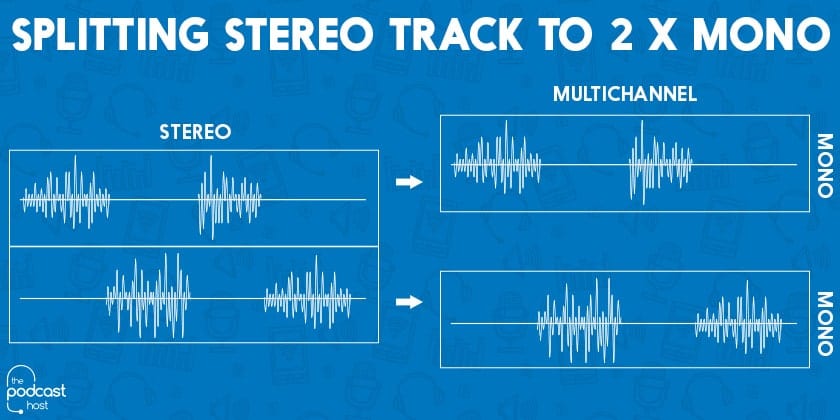 So how do we record an interview, or Skype, with the speakers on separate tracks? And should we always seek to record multitrack-style? There are some pros and cons.

In my experience, these are the two big benefits of working in this way…

These aren't set in stone, but you should take them into consideration before deciding on whether to go down the multitrack route.

If your guests or co-hosts are in the same room as you, then you'll be able to record everyone on their own tracks provided you have the right equipment and/or software.

Recording everyone together means there will be some ‘bleed' – so you'll tend to hear everyone's voice being picked up on every mic track. This will vary, depending on recording environment and gear setup.

Recording Into a Computer

There's two factors to this: 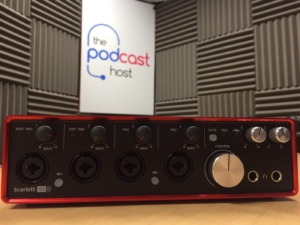 You can then split that track, turning them into two mono tracks to work with in the editing, or “post-production” process.

If you have any more than two people in the recording though, then some of them are going to have to ‘share' a track, even if they both have individual mics. Remember that just because an interface lets you plug in multiple mics doesn't mean it accommodates multitrack recording.

Some audio interfaces do allow you to record each mic independently though. We've reviewed the Focusrite Scarlett 18i8 and the M-Audio M-Track Eight, and both of these devices were able to channel multiple mics into Adobe Audition. 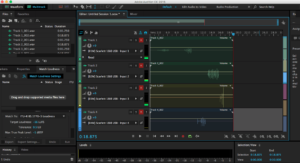 So you're going to need a DAW (Digital Audio Workstation) that allows you to record in mulitrack and is compatible with the interface you're using.

The popular open-source program Audacity has been known to allow users to record multiple tracks simultaneously. But finding a compatible interface that'll work in harmony with Audacity and your sound card is becoming increasingly difficult.

I predominantly use Adobe Audition, which is great for multitrack recording, but will cost you an ongoing subscription fee to use. See my Audacity Vs Audition comparison for more info.

Another popular DAW in podcasting is Reaper, which will allow you to record in multitrack. Almost all pro-level (paid) DAWs will – but again, you need to make sure they'll be compatible with the device or interface you plan on using, before you go out and start spending money.

Things tend to get a bit more straightforward if you're using a digital recorder.

At a very basis level, you can use a stereo splitter to run two mics into a Zoom H1, then split the track in post-production. These mics would need to have 3.5mm (standard headphone plug) connections, commonly found on lavalier mics. 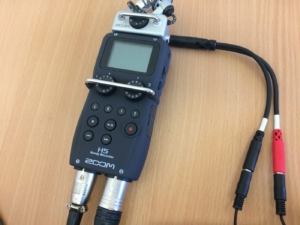 If you're using the more beefed-up Zoom H4 or H5 models, these can accommodate the recording of four tracks simultaneously.

This can be done in a number of ways. You can send two mics/tracks in via the XLR inputs on the bottom. Then you can plug an additional two lav mics in using a stereo splitter.

This would record three tracks, but the stereo splitter track would be (funnily enough) in stereo, and you would split it into two mono tracks in post-production.

Alternatively, you can plug a Zoom EXH-6 adapter into your recorder, which gives you an additional two XLR inputs. (Incidentally, these are actually known as ‘combo' ports because they also take TRS plugs). 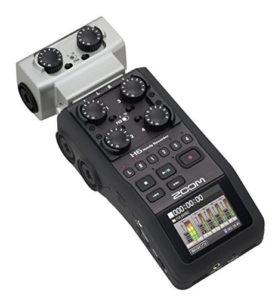 If you're feeling flush, you might even look at the Zoom H6, as opposed to the H4 or H5. With this top-of-the-range recorder you can record a whole six audio tracks simultaneously.

To be honest though, if you're thinking along those lines, ask yourself if it's really necessary to have six people on a podcast at once?? (it might well be, for whatever reason, but I'm just saying…)

So what about recording guests or co-hosts who aren't in the same room as you? Can you do a multitrack recording when everyone is getting together online, rather than in-person?

The answer is yes. There are a few different options available to you, each with their own strengths and weaknesses.

Let's start with my favourite one.

Everyone Records Their Own Audio

When done correctly, this is hands down the best way to do a multitrack recording online, in my humble opinion.

Though the conversation may take place over Skype, Hangouts, or any other type of call software, all of the recording is happening individually, in isolation.

Each participant needs to set up their mic or recorder so that it's capturing their own part of the conversation.

These audio files are then synced together in post-production, and will sound like everyone was recording together in the same room.

This is commonly referred to as a “double-ender” – no laughing up the back, please.

As you can imagine, there are still a few barriers and downsides to this approach.

You need everyone to be tech-savvy enough to record their own audio for starters. If you're an interview show, this might be a step too far for some of your guests.

The “I've forgot to hit record” thing happens now and then to even the most experienced podcasters. With each participant, the risk of this happening multiplies.

You should always run a back up recording of the whole conversation at your end, just in case. It might not be recorded on multiple tracks, but that's better than it not being recorded at all.

Processing and editing together multiple files will add a bit more time onto your production workload too. Can you afford this extra time? Or can you afford to pay someone to edit for you? 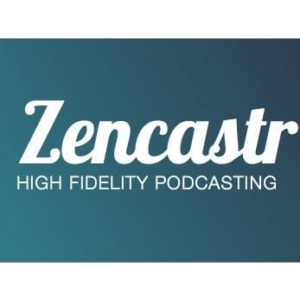 Nowadays, there are an increasing amount of call recording and “VoIP” (Voice over Internet Protocol) tools available online.

You'll usually need to pay to use these – though some do offer limited free options, then work up into a tiered pricing structure with more recording capabilities.

Here is my roundup on the best tools for recording a podcast online.

The jist of it is though that Zencastr is currently the best option for multitrack recording over the internet.

If you decide to go down this route, be sure to use the coupon code THEPODCASTHOST for 20% off the first three months of a monthly Pro subscription with Zencastr.  If used for a yearly subscription, it will be 20% off for the entire year!

Computers, apps, and software can crash causing you to lose some, or all, of your recordings.

Zencastr is a fantastic service, and the folks running them do a great job. But there's still the odd report of a crash and some lost audio here and there.

No kind of recording is entirely without risk of course, so that isn't mutually exclusive to them.

Just like any other type of recording you do, it's always a good idea to have a backup in place.

This has been a roundup of some of the most common and accessible multitrack recording methods I've come across so far.

If money is no object and complexity is no issue, then there are many more setups out there too. But in podcasting I always advise people to never make things harder than they need to be.

Hopefully there's at least one option here that you think might be ideal for you.

Or maybe it's helped you to decide that it isn't worth the hassle, and you'll just keep recording the way you are for now.

In any case, I hope this guide has been useful to you. We always have more detailed information in The Podcast Host Academy. You can join us there to learn not only recording, but also content stacking, promotion, planning and more!

Please feel free to add your own thoughts, opinions, and suggested setups too – you can do that in the comments section below.

2 thoughts on “Recording on Separate Tracks | The Podcast Multitracking Guide”