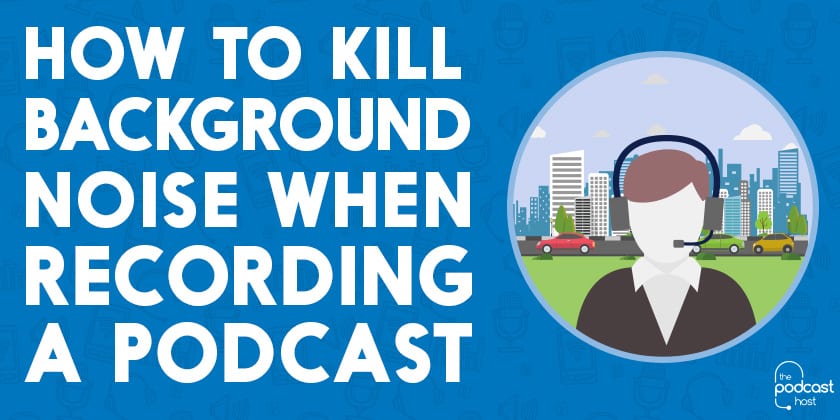 When recording a Podcast at home, background noise like passing traffic can be a big problem.  Let’s face it, if sound control was easy, why would we need hi tech recording studios?

This is a pretty age-old question, but I’ve been asked it a few times recently, and spotted a great thread on in via Quora, so it's obviously back in fashion. I thought I’d cover the topic, sharing out some of the great feedback from that thread, and adding some of my own thoughts.

At the end of the day, short of the aforementioned podcast studio, it’s very difficult to get rid of background noise altogether. But, here are some steps which can help to reduce, if not eliminate, non-constant background noise in your podcasts.

Dynamic microphones tend to pick up a narrower range of sounds, both frequency and amplitude. This means it’ll pick up less sounds from far away and less of the annoying, non-voice frequency audio.

A Dynamic microphone like the ever popular Shure SM58 has a heart shaped pick up pattern so it’ll be much more responsive to you in front of the mic to anything going on behind it.

Or, I often recommend the Rode Podcaster/Rode Procaster combo, depending on whether you want USB or not. Check out my podcasting microphone guide for more tips on choosing one.

Whatever you do, make sure you’re avoiding condenser microphones in this situation as they’ll pick up anything and everything around you.

Use an Acoustic Screen

An Acoustic Screen is a small, normally semi circular device that attaches to your mic stand, surrounding the mic and protecting it from a great deal of lower level background noise. If the external sounds are relatively low then this could make a big difference, but it wont cut out louder interruptions.

Get Close and Cosy with your Mic

If you're close, then you're also loud. This means you're much louder than the surrounding sounds and so you drown them out pretty effectively.

If you're quiet, then normally in post production you'll have to boost yourself up a bit, and with it comes the background noise. So, get close, record loud and make sure you're creating a big volume gap between you and that traffic.

Try to create a ‘dead corner' as far from any opening to the street as possible. Do this by attaching soft rugs/foam to the wall on two sides with a thick rug on the floor.  Make sure that the mic is pointing AT the rugs during the recording.

So, you're already cosy with your mic, but you can dampen the acoustics when recording by getting even cosier! These creative suggestions come from Julian Tardo and  Dan Fouts with a couple of my own additions.

Get a thick heavy rug, and cover the floor. Then hang drapes all around the walls, and cover any windows if you can. Then get recording to test the noise, preferably with a duvet over your head for good measure!

This sounds stupid, but if it's at all practical (and you don't overheat…) then your recording will benefit greatly.

If you don't fancy the duvet, you can hang a rug from the ceiling a couple inches away from the street facing wall, creating a second “wall” with a pocket of air between. A second rug is then hung a few inches in from the first creating another air pocket.

This is essentially recreating some of the effect you get with double glazing, except with the vacuum of course. But it still has a big effect, although is a fair bit of effort.

For some, the best solution is actually to take your mic and your recorder and head to your wardrobe. This is similar to the duvet, but might be a little more sustainable.

Getting in amongst all of your hanging clothes can have a big effect on your recordings – they'll dampen out tonnes of the background noise, and create a nice silent bed for your voice.

Double glazing was mentioned above, and it does have a big effect on background noise within a house. But if you don't have that, then you can at least keep out some of the noise by fitting rubber or foam seals to windows and doors.

This will help to control the air flow into your house, and keep a bit of the noise out with it.

This is another suggestion from Julian, and a good use which I've used on a few occasions. Use backing music mixed in at a very low level to mask distant, diffuse sound whilst not interfering with the main voice recording.

A nice quiet bed can disguise a low rumble quite nicely and make a big difference to a recording. This isn't practical in some instances, especially if you're going for half an hour or more, but a short 5 minute tutorial video could benefit well from a decent music bed.

Go With the Flow: Add some Actuality

Here's a final, interesting suggestion from Philip Rosenberg from Sex and Politics Radio: if the above are impractical, or simply too much work, then use the background noise to your advantage!

Have a little think about whether your project could actually work with general street noise and tie it into the narrative.

Philip suggests choosing a time of day when there's more consistent noise and do your recording then. You can tie the street noise into the production itself, allowing it to give the recording more atmosphere and character.

This is something that's done a great deal in professional audio production, so much so that background noise in that context even has a name: actuality.

Producers will add actuality to a studio recorded voiceover to add that character and texture that Philip mentions in his tip.

If you have a problem with background noise then it's probably ridiculous to you to think of taking a perfectly silent, studio quality recording and then adding street noise to it, but that's exactly what they do.

Have a listen to an audio feature from the BBC and you'll come across an example of it pretty quickly.

Recording environments and setups is just one of the many things we help podcasters with inside The Podcast Host Academy.

That's our membership area where we hold regular live Q&A sessions, run a community forum, and offer access to every video course, checklist, and ebook we’ve ever made.

We'd love to see you there!