As you’d expect with one of the most popular microphones on the market, the demand for Blue Yeti accessories is huge. It’s a versatile little beast right out of the box with its multiple polar patterns, a built-in stand and various other features. But, add a few choice accessories, and it can be even better.

You can read our full Blue Yeti review, but let’s cover the highlights here.

On the plus side, it’s simple, good quality, and helps you get up and running in minutes. Those three factors are why the majority of podcasters on our gear survey claim the Yeti as their mic of choice. But, on the negative, the Blue Yeti’s short stand makes for a less than ideal recording position, and its sensitive condenser-mic innards pick up pops like no-ones business.

Luckily we’ll cover a range of Yeti add-ons here that can solve for both! So, let’s get into it – here are some of the best Blue Yeti accessories if you’re looking to upgrade your mic.

And if you’re not yet committed, and still shopping around, you can see the full range of Yeti competitors in our USB microphones roundup.

Heads up: We use affiliate links in this post and may earn a small commission should you choose to buy through them – though never at any extra cost to yourself 🙂

Question: What Are the Best Accessories for the Blue Yeti Microphone?

This post was prompted by an email I got from Brian Flaherty about upgrading his Yeti.

Hi Colin – thanks for all the advice. I do have some questions about gear. I did a few episodes of a podcast with 2 other friends (so 3 of us in all) and we all shared the Blue Yeti which as long as we were close enough to the mic sounded great. So now I want to take it to a new level with an interview podcast and I plan on using the same Blue Yeti and buying a second one for my guest.

My question is: can you recommend a stand or holder that works with the Yeti to allow me and the guest to sit normal and get right up on the mic? Same with the filters/windscreens. DO I need those for a quiet office situation?

So, thanks Brian, good questions, and they highlight the most common downsides of the Blue Yeti, when used in the wild. So, let’s look at a few things we can do to improve the performance of our Yeti.

As an aside, too – can you connect and record 2 USB mics into one computer? Our article explains why we don’t recommend it, and gives you a whole load of better options instead!

The Trouble With the Yeti’s Stand

On the microphone mounting question first – this is a great step to take. The Yeti’s stand is fine as a stop-gap, but in reality, it’s too low to get your mouth in the right position when it’s placed on a normal table or desk. Speaking and recording are a whole lot easier if you can mount your microphone a little higher up, more at natural mouth level.

When you bend, it has a pretty dramatic effect on your sound, after all. Your voice becomes strained as it forces its way through a bent windpipe, emanating from squashed lungs and a crushed diaphragm. Sounds dramatic, right? But those parts of your body are soft, fragile, and they’re strongly affected by the position you sit in. If your spine is straight and your chin high, then you’ll almost always sound better.

For a deeper dive on this, check out Where Should I Put My Blue Yeti: Tips for Positioning

A shock mount is a tool that attaches your microphone to the microphone stand but protects the mic from the vibrations and noise passing up through the stand or the table.

Without a shock mount, you’ll often hear banging, rubbing or rustling which is conducted right through the stand into the mic. But, a shock mount holds the microphone in a soft mount – often rubber bands – so that the noise can’t reach the mic itself.

There is an official Blue Yeti shock mount, the Blue Radius III. It’s not the cheapest in the world but it should be guaranteed to work great with your mic. The Blue Yeti Pro is pictured here, on the right, mounted in one of the same.

There’s a decent alternative Yeti shock mount by Auphonix which is worth a look if you’re on a lower budget. It might be a little less long-lasting but it’s well thought of on the whole.

I know you can make other shock mounts work with the Yeti too, but it might be a little hit and miss in terms of fit. If you have a music store close by, though, then by all means take it in and try it out with a few. You can get normal shock mounts a fair bit cheaper than that one from Blue. For pure ease of use, though, you can’t beat Blue’s offering, and the Auphonix one is sure to fit too.

Next, you’ll need a microphone stand to attach that shock mount to. I did a post on microphone boom stands a while back, or you could just get a tripod stand. Be warned, the tripod stands take up much more room, and just tend to get right in your way. I’ve always found it well worth paying a bit extra for a boom arm stand for real ease of use.

If you do go the boom arm route, you’ll need a good quality one to take the weight, and Blue have the on-brand Blue Compass Boom Arm available. Again, not cheap, but good quality, and (should be…) guaranteed to fit well.

If you want to go for an alternative, my favourite top quality pick is the Rode PSA1.

Either way, boom arms are amazing for keeping your mic handy, but just out of the way. Just pull the boom arm around to your mouth when you want to record and push it back when you’re finished. Easy! 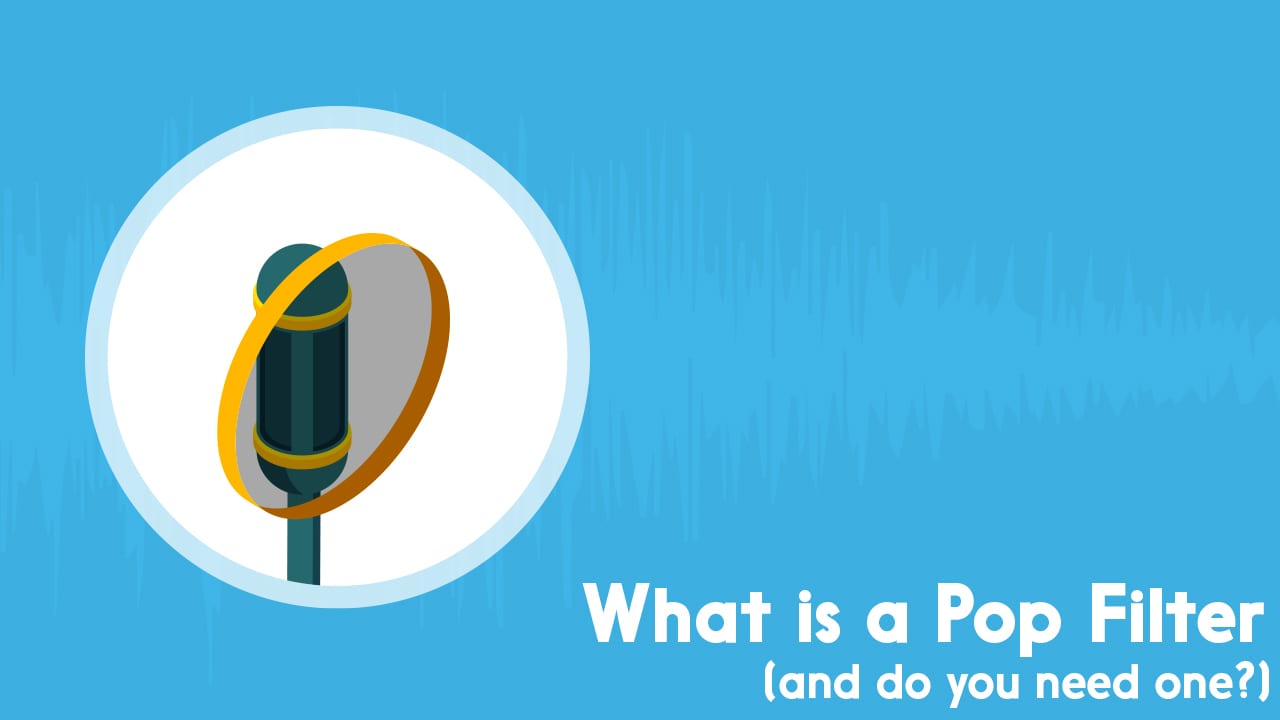 What Is a Pop Filter and Do I Need One: How to Stop the Pop

A pop-filter is used to eliminate the sound of plosives. Plosives cause a rush of air that can cause the microphone capsule to overload. This results in a distorted or low, airy t… Find out more »

Using a Pop Filter With Your Blue Yeti 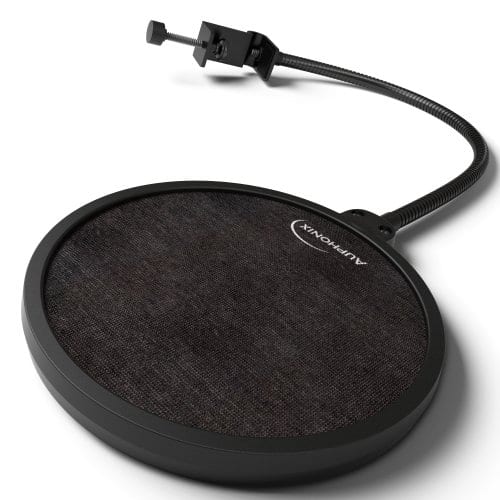 Lastly, for the windscreen/pop filter question, a pop filter is great for reducing speaking noises called plosives. A plosive is the popping sound that happens when you say a ‘P’ or a ‘B’ or similar – when you blow air from your mouth and it hits the microphone with force.

Good mic technique means getting right up close to the mic so that your voice is much higher than the background noise. But, as a result, that will increase plosives since the air you’re expelling from your mouth has far less distance to travel to the mic.

Pop filters are ten a penny, and most come with pretty universal screw mounts that clamp onto your mic stand or shock mount. This one from Auphonix is a decent choice, or, again, you could go with the slightly overpriced Blue Pop Windscreen.

These are pretty un-technical bits of kit, though, so don’t overthink it. You can even make a pop filter from a hanger and a pair of tights! 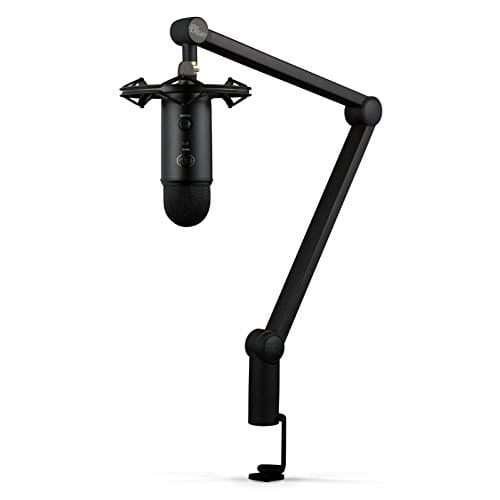 That sums up the most useful Blue Yeti accessories that we’ve used. I’m sure there are more around so be sure to tweet us if you’re using something different.

If you have the budget, it’s well worth getting the whole shebang – Yeti, plus shock mount, plus boom arm, plus pop filter. In fact, you can buy the full Yeticaster package as a bundle, so that’s worth checking out.

Your neck and back will thank you for saving them from the constant leaning over, and your audio quality will jump as a result! 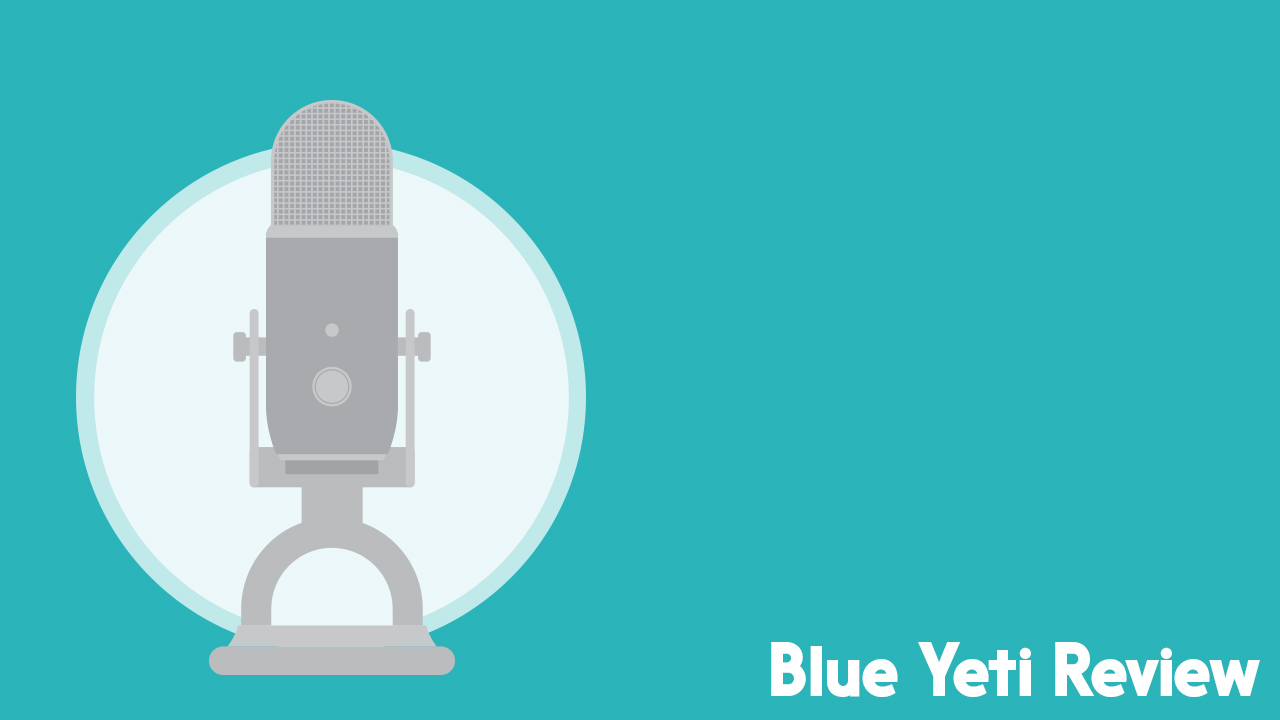 The Blue Yeti is one of the most popular mics in podcasting. Does that mean it’s “The Best?”  Find out more »

We’ve covered the best hardware accessories for the Blue Yeti – but what about software? After all, you’re going to need something to record and edit your audio with.

There are loads of great podcast software options on the market these days. If you’re someone who finds too much choice overwhelming, though, then we tend to make 2 recommendations to those asking about Blue Yeti software.

Looking for something free? Opt for Audacity. You can record and edit your audio in Audacity and it won’t cost you a penny. The main downside is that its interface looks a little clunky and complicated. If you’re new to audio, this can all take a bit of time to figure out.

The second option is ‘Podcast Maker’ tool Alitu, which makes recording, editing, and publishing your podcast as simple as humanly possible.

Alitu lets you record online calls too, which is something Audacity doesn’t do. Alitu is a paid monthly subscription, but you can try it out free for 7 days to see what you think!