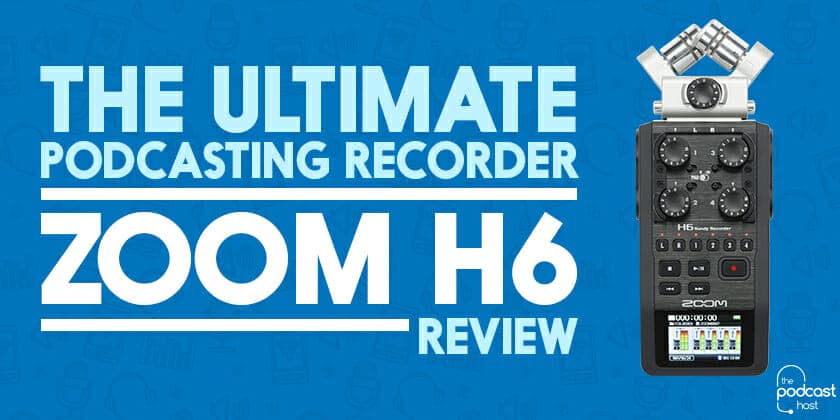 Zoom are masters of the digital recorder, and the Zoom H6 is currently their marquee model. But, while it's top of Zoom's list, should it be top of yours? That's what we're here for: read this Zoom H6 review to find out.

We've been using the Zoom H4n and Zoom H5 recorders for a few years here at The Podcast Host, and both are superb bits of kit.

But we treated ourselves to an early Christmas present in the shape of the Zoom H6, and I'd been looking forward to getting a good look at it.

I've heard enough glowing reviews of the H6 from well respected podcasters and audio engineers to know that there's no doubt over its quality.

So, in this Zoom H6 review, we'll go over what makes it such a good recorder. But we'll also look at the reasons why it might be overkill for some podcasters, depending on their own individual requirements.

What is the Zoom H6?

The Zoom H6 is akin to a complete recording studio that fits in the palm of your hand.

It's a portable digital recorder that can be used to capture top quality audio recordings, either directly onto the device itself, or into your computer's audio recording and editing software. It takes 4 XLR inputs as standard, and captures another 2 channels via the top-mounted stereo mic; hence the 6 in the name.

Add to that a host of features built into the device, such as limiters, compression and other processing tools, and you've got a lot here, all packed into one trim little device.

What's in the Box?

The Zoom H6 comes with a few items as standard.

Record up to 6 Tracks Independently

The H4n and H5 were ‘four track' recorders, but the Zoom H6 boasts an incredible six tracks.

In short, this means you can run four external mics into the H6, as standard, plus two more with the help of a dual XLR capsule on the top. What that all set up, you can record six independent audio tracks simultaneously.

If you find yourself working with multiple guests or roundtable episodes locally then this can be a huge upgrade in the control you'll have over your recording and editing sessions.

Many audio dramatists swear by the Zoom H6 for this very reason. A show's entire cast can be recorded independently, onto one single device, without anyone having to share a track, vastly increasing control during the recording, and in post-production.

The Zoom H6 as a USB Audio Interface

You don't need a computer to record with the Zoom H6, it's designed to work entirely on it's own. But, if you choose to, it can also be used as a USB audio interface.

This means you can record directly into your computer's DAW (Digital Audio Workstation) with multiple microphones, via the H6 and a USB cable.

Though the H6 has a nice little display window on it, many podcasters still prefer to monitor recordings on a bigger screen in a waveform view. This makes it much easier to see that everything is okay at-a-glance.

Whether or not you'll be able to record each mic independently into your computer depends on which DAW you're using. But this is doable with pro-level programs like Cubase (included), and Adobe Audition (pictured). You just need to install the Zoom H6 drivers from the Zoom website beforehand if you're working on a PC.

The H6 is a powerful and versatile recorder, but that doesn't mean it's particularly complicated to use. Anyone who's used a Zoom recorder before, or is at an intermediate level in using audio gear will be able to find their way around it straight out the box.

To be honest, even without any audio experience, you can use the Zoom H6 at a simple level. It's hard to miss the big red record button on the front, after all, and you can learn the more advanced features as you go.

There are 4 ‘combo' jacks on the main body of the recorder that take XLR or 1/4″ connections.

The levels for these can be independently controlled on the front of the recorder. Each has its own on/off button, gain dial, and PAD switch for handling high signals.

There's an additional 3.5mm jack on the Stereo X/Y capsule. You could use this to add a 3.5mm stereo mic, or 2 lavalier mics to your multitrack session via a stereo splitter.

Talking of stereo capsules, there are two different detachable mic capsules included with the Zoom H6 as standard.

The first is a stereo X/Y mic, which is actually 2 microphones.

According to Zoom themselves, “allow your recording to cover a wide area yet still capture a strong centre image”. This works well as a default, so even if you don't connect an external mic to the Zoom, you'd still be able to capture great interviews on location with this capsule, particularly in places with a nice background ambience.

The second is a Mid-Side (MS) mic, which is also 2 mics in reality.

Zoom say that the basic concept behind this capsule is that “the Mid microphone picks up signal coming from the center, while the Side microphone creates ambience and directionality by adding or subtracting information from either side.” This could be really useful for recording yourself talking at an event or location where you want to include the sounds around you as part of the audio's ambience.

You can buy additional capsules too. There's a Zoom SSH 6 Shotgun Mic attachment for ultra-directional recordings where you need to isolate one sound and reject everything else around it. And there's a capsule with 2 additional XLR 1/4″ ‘combo' inputs if you want a total of 6 of them for your recording session.

Also on the Zoom H6

On the side of the recorder, there's a headphone jack for monitoring and playback of recordings. This has its own volume control.

On the same side there's the power button (which doubles up as a lock/hold button) and SD card slot, whilst on the other side you'll find the menu button, scroll button, and USB jack.

On the bottom there's a line out jack for sending audio to an additional device, like a digital camera.

There's also a jack to plug in a wired remote control (not included) for use if you need to be working a short distance away from the recorder.

On the back you'll find the recorder's battery compartment, which takes 4 AAs. And there's a speaker for playing back recordings without the need for headphones.

There's a tonne of different options and settings inside the recorder. I'd really need to write a manual to run through them all, but here are the most relevant.

You can record in either WAV or MP3. The most common setting for recording podcast vocals is 44100Hz, 16bit.

You can go as high as 96000Hz, 24bit (way too high) or as low as 48kbps MP3 (way too low). As always, file quality is reflected by its size on the SD card. The higher quality you go, the bigger the files are.

This helps reduce the impact of unwanted low sounds in your recording, such as popping, or wind/handling noise.

Sound Quality of the Zoom H6

Here are two sound samples recorded on the Zoom H6. Both have been normalised but no post-processing or cleaning has been applied.

The first, above, is recorded with the Stereo X/Y capsule.

And the second, above, is recorded using a Samson Q2U plugged into one of the H6's XLR ports.

Cost of the Zoom H6

Okay, that's our Zoom H6 review! Unsurprisingly I share in the common opinion that the Zoom H6 is an incredible piece of kit, and a great choice for audio producers and podcasters alike.

But, although it's definitely good value for all that it does, it's still a serious investment. So do you really need one?

Who DOES Need a Zoom H6?

If you want the ability to record 3 to 6 participants on independent microphones, and even independent tracks, then the Zoom H6 is the recorder for you. This might be for 'roundtable' podcast episodes, or it might be for a multi-cast audio drama.

Need More Help Choosing or Setting Up You Podcast Equipment?

If you need some more tailored advice for your own setup, or want help with any other aspect of podcasting, then we’d love to work with you.

Inside The Podcast Host Academy we run regular live Q&A sessions where you can get all your questions personally answered by our team, and you'll get full access to all of our video courses, tutorials, ebooks, and downloadable resources!