December 2020 update – Zoom have just released the PodTrak P4. It’s a little podcast recorder that does everything a mixer can do (including a mix-minus!), though in a much simpler and more accessible way. If you’re intrigued to find out more, check out our full review of the Zoom PodTrak P4.

A mixer is a great means of recording podcasts with remote guests or co-hosts over call apps such as Skype.

Mixers also give you the capability to create your episodes “as-live” by playing effects, transitions, and other audio clips during the recording, as opposed to editing them in afterwards.

If you combine the two, you can have a remote guest on the show with you, and set your mixer up so that they can actually hear all the audio that’s being played into the mixer.

But the one thing you don’t want them to hear is their own voice, so we need to set up what’s called a “mix-minus”.

Setting up a Mix-Minus

What do I need?

Mixers can be a bit confusing to look at at first, because there’s a lot of buttons and dials on them.

For this though, we’re only interested in two of the mixer’s audio channels.

So, with channel one, you want to plug in one end of your XLR cable, and then plug the other end into your microphone. Here I’m using the Samson Q2U, but any mic with an XLR connection will do.

With channel five/six, you want to plug in the Y end of your stereo Y cable. Put the red plug in the right port, and the white plug in the left port. R for right and R for red is a good way of remembering this if your mixer’s jacks aren’t colour coded.

Plug the other end of your Y cable, the 3.5mm plug, into your computer’s “audio out” or headphone jack.

But the guest still can’t hear the presenter, so we need to take the audio from the mixer and send it back into the computer.

Then plug the other end, the 3.5mm end, into your computer’s “audio in” – if you’re working with a Mac you might need an additional USB adapter for this.

So this means that the presenter’s voice, along with any music or effects played into the mixer, can now be heard by the guest. But that also means they’ll be able to hear their own voice, and that’ll get distracting.

All you need to do to prevent that, is to turn down the “FX” or “Aux” dial in the guest’s channel – in our case channel five/six. At this point, they can still hear everything, except their own voice being played back to them.

That means you can record each side of the conversation on either side of a stereo track. This way, if there’s some background noise at one end whilst the other person is talking, you can clean it up a lot easier when you’re putting the recorded conversation back together.

Your mixer won’t actually store the recordings you make. For this, you need to send your audio out of the mixer, and towards a recording destination.

Most commonly this will be the DAW (digital audio workstation – your recording/editing software) on your computer, or a digital recorder.

Mixer models vary, but they all run on the same principles. On most mixers the “audio out” jacks are located in the top right hand corner of the device.

The cables you use to take audio out of a mixer are largely the same as the ones mentioned above. It just depends on where you’d like to record your audio.

If you’re using a USB mixer then you can record directly into your computer/DAW by selecting the mixer as the software’s “mic” or input. 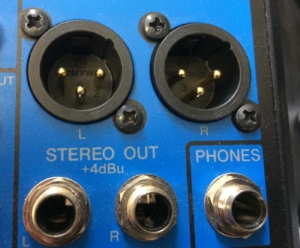 If your mixer has XLR outs (like the Yamaha MG10 – pictured) then you can direct stereo audio into a digital recorder with XLR inputs. Commonly these are models like the Zoom H4, Zoom H5, and Zoom H6.

XLR inputs on recorders are usually combo jacks, meaning they can also accept a 1/4″ plug. This means you can take the left and right audio channels out separately (see the 1/4″ L and R jacks on the Yamaha MG10 image) in the same way you’d do with XLR cables. Except, this time you’d be using two 1/4″ to 1/4″ cables.

If your recorder only has a 3.5mm jack for external mic connection (for example, the Zoom H1) then you can feed your mixer’s audio in here.

For this, use a stereo Y cable, like the one in the mix-minus section. Connect both 1/4″ plugs into the mixer’s L and R jacks (remember, R for right/red) and feed the 3.5mm end into your recorder.

If you’re new to audio production, this all might seem a bit overwhelming at first. Like anything else though, familiarity comes through practice.

Find the setup that works best for you and the equipment you have, take a picture of it, then try setting it up and taking it down again a few times.

Practice recording interviews initially with friends, instead of diving right in to interviewing someone for your podcast.

Always keep in mind two questions when setting up to record.

And finally, here’s some useful links for you…

Don’t want to use a mixer after all? There are other ways to record online calls and podcast interviews.

In the market for a mixer? Check out our best podcast mixers roundup.

Want to know more about all the equipment side of things? Here’s our guide to finding the best audio cables.